…from the Middle East Eye

Update: Just in. 9:33 EST His name was Meisam Ali Ismail, born in 2004 so he is only 15, stabbed 17 times, dragged through the streets, hauled up onto the back of a pickup truck where his throat was cut, and then strung up by his heels for all to see the terror of the mob.

[ Editor’s Note: We finally have some high official reaction to this teenager’s lynching. The police, who retreated before the mob yesterday, now say the protesters set fire to the young man’s house where he lived with his mother.

Yesterday, it was claimed he shot four of the protesters with a pistol, with the protesters today saying he attacked the protesters’ camp, not a survivable act with just a pistol. There is no word why the police were not involved with him at that point. From yesterday’s story:

“On Thursday, witnesses said, he climbed up onto the roof of his house and began shooting in the air with a pistol in order to shoo the protesters away from his family’s home.

That prompted a mob of protesters to barge into his small house at the edge of the Al Wathba Square where Haitham lived with his mother and stabbed him for 17 times.

Then they took him outside, pulled off his clothes, dragged him bleeding through the streets, hung him by his ankles from a traffic light pole and cut his throat.”

The good news is that Shia cleric Muqtada al-Sadr has weighed in that he wants the lynch mobsters turned over in 48 hours or he will pull his people protecting the protesters off the streets.

So we finally see at a top down attempt to impose discipline on the heavily infiltrated protest movement, which is a nightmare for security to deal with, as you have major bad apples mixed in with peaceful protesters; a classic outside Intel agency, or agencies, game plan to create chaotic regime overthrow conditions.

This could get worse before it gets better… Jim W. Dean ] 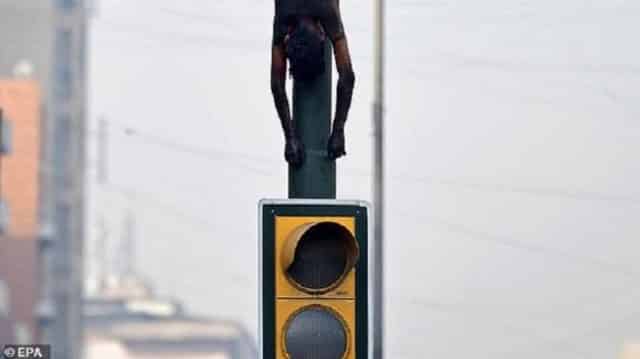 Influential Shia cleric Muqtada al-Sadr has threatened to pull his supporters from Baghdad’s Tahrir Square unless those responsible for lynching a teenager there are found.

According to police and witnesses, a dispute between a 17-year-old male and protesters – who accused him of attacking a protest camp – spiralled into violence which saw the teenager’s body strung up from a lampost.

Police also accused protesters of setting fire to the nearby house of the young man.

Video streamed live online showed security forces withdrawing before a crowd dragged a man along the ground while people kicked him.

His body, dressed only in underpants, was then strung up by the feet from a traffic light. The corpse was later removed and taken to a forensic morgue, witnesses said. The morgue confirmed receiving a body.

“If within 48 hours, the terrorists responsible are not identified, the blue helmets will have to withdraw from all the places where protesters assemble,” it wrote.

Powerful Iran-backed militia leader Qais al-Khazali – who was recently targeted by US sanctions – denounced the “chaos” he has warned of since protests began.

“How long will this chaos and lawlessness continue, these weak security forces and proliferation of weapons and dirty militias,” he asked on Twitter.

The brutal episode could radically change the situation for a protest movement that has claimed pacifism in the face of violence in which 460 people have been killed and 25,000 injured, mostly protesters.

A statement signed by “the protesters of Tahrir” shared online denounced “a Machiavellian plan aimed at tarnishing the reputation of the peaceful protesters”. [ Editor’s note: No Iraqi protester wrote this statement and used the term Machiavellian, a strong indication that a foreign influence had stepped in for damage control…Jim W. Dean ]

The thousands of protesters in Tahrir Square “had nothing to do with this morning’s events”, it concluded. Demonstrators accuse pro-Iran armed factions of playing a role in the killing and abduction of protesters.