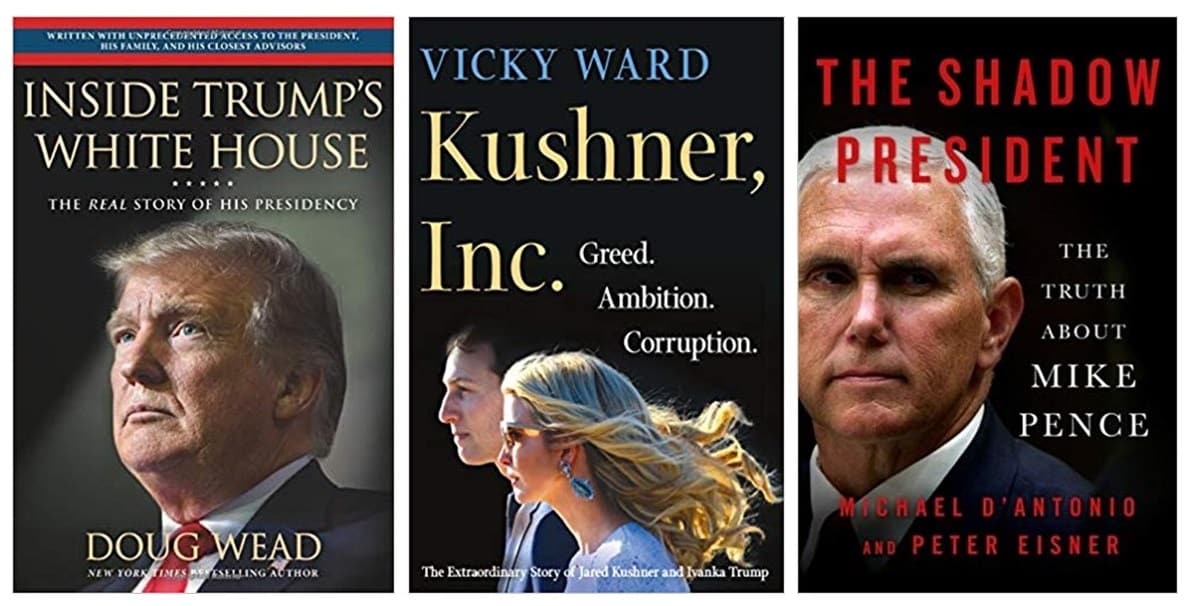 Amazon Page for the Book

I thought this book was going to be important so I looked at the index first (extremely good) and then the end notes (unprofessional and mediocre — URLs instead of full citations of author, title, publication, date).

Then on page 7 the author calls Jared Kushner “brilliant” – this is the same Jared Kushner that was in the third out of five ranks in school, bought his way into Harvard, and took a $1B bribe from Qatar to save his failed business.

After reading the entire book I concluded that this book will appeal to the base at a gossip level, but it lacks substance and not only fails completely to calalog the President’s many accomplishments (the Washington Examiner‘s one article, “Trump’s list: 289 accomplishments in just 20 months, ‘relentless’ promise-keeping” has 100X more substance  than this entire book), it is also grossly disrespectful of the First Lady, putting her in as an afterthought and not giving her credit for passing the smell test with the public and making the election of our President possible in that important way.

It is clear to me that this book is a desperate counter to Vicky Ward’s utterly devastating and deeply researched Kushner, Inc. – Greed, Ambition, Corruption (my review here) and the primary purpose of the book is NOT to honor our President (or the First Lady) but to dissemble and deceive with respect to the disasterous, embarrassing, failures of the Clown Prince and #UnwantedInvanka.

The author increases my disdain for this book with his glorification of Paula “give me your money and I will pray that you get wealthy one day” White, a snake oil salesman of the first order — “prosperity gospel” is absolute crap and this woman is an embarrassment to the Presidency. I suspect an investigation will determine that like Bono and the Clintons and others, less than 5% of what she receives in donations actually goes to good works.

Throughout the book there is clear evidence of glibness, shallowness, and a failure to understand both the externalities (Xi’s role in relation to Korea, Putin’s role in relation to Syria), a childish perception of the Nobel Peace Prize (for which I have been recommended), thinking it can be won with one meeting (the Obama standard gives some credence to that but in fact the terms of the will specify the Prize should be awardd to the  one individual who has done the most in the past year to demilitarize the world). Xi, Trump, and Kim, and Moon should win the prize eventually.

The author gets both Syria and ISIS wrong, to the point that I wonder if he ran the book past CIA to ensure he was not running afoul of the false official narratives. ISIS was created by the Mossad, Saudi Arabia, and CIA together, and any book that fails to communicate that is  intellectually and morally deficient.

The author puffs on how Pence got selected. My understanding, from a person party to the decision, is that Paul Manafort and Roger Stone recommended Pence to secure the evangelical Christians that were essential to victory. Pence is a a lazy, pretentious, back-stabbing delusional according to one biography, The Shadow President – The Truth About Mike Pence (my review here) and the author’s account simply does not stand up. I will be very disappointed if the President does not find a way to retire Pence and put in a woman of color, ideally Dr. Cynthia McKinney, toward our shared objective of a landslide victory that mobilizes blacks and women as well as Latinos, students, and the elderly.

Some insights are offered on Brad Parscale but they are overblown — Parscale was a nobody willing to work for half price when Kushner hired him to create low-rent corporate web pages, and today Parscale and Kushner appear to be skimming tens of millions of dollars from Trump’s donations, according to one account, “Are Jared Kushner and Brad Parscale Skimming Tens of Millions of Dollars from Trump Campaign Contributions?”

In passing the author reveals that he trades in presidential documents, and the documents given to him by President Trump (North Korean exchanges) are expected to fetch a handsome return for the author down the road.

The author disrespects all the other books written by insiders — including particularly Chris Christie whose transition work was destroyed by Jared Kushner (thus cutting in half what the President might have accomplished in his first term). I provide links to my other reviews below, any one of those books is more valuable  than this one.

On a positive note the author illuminates President Trump’s brilliance on Korea (there is only one brilliant person in the White House and it is not Jared Kushner) and captures the importance of how the President has “reinvented” presidential communications to the public. He fails to see or document the mediocrity of the President’s communications  team, or the absence of a Presidential dashboard process for monitoring what the entire public is thinking by location, demographic, and issue.

Dobbs, Lou   Review: War on the Middle Class–How the Government, Big Business, and Special Interest Groups Are Waging War on the American Dream and How to Fight Back

Hartmann, Thom   Review: Screwed–The Undeclared War Against the Middle Class — And What We Can Do About It

Norquist, Grover Review: Leave Us Alone–Getting the Government’s Hands Off Our Money, Our Guns, Our Lives

Frank, Thomas   Review: One Market Under God–Extreme Capitalism, Market Populism, and the End of Economic Democracy