China suspends planned tariffs slated for December 15 on US goods

[ Editor’s Note: Trump will get the nice year end uptick in the stock markets on Monday as he had always planned for, part of his campaign strategy of using a good US economy to ride into a second term if his legal problems do not become an elevator shaft for that effort.

With his ringer William Barr as Attorney General, Trump is praying that he plus his Supreme Court judges will have his back on blocking access to any torpedoes sitting in his financial records, massive amounts of money laundering which should trigger a RICO case against him for “running an ongoing criminal enterprise”.

While Trump’s team has a carefully planned 2020 campaign roll out with this phase one China trade deal and the Republican controlled Senate giving him an impeachment pass that should give him a bump in the polls, a Supreme Court ruling to release his records could be the beginning of the end of the Trump theater as president.

What has not gotten much coverage is how this could affect Jared and Ivanka Kushner and the business dealings they have been doing as part of the Trump family helping themselves to all the influence goodies of being in the White House. Santa might be putting a lot of coal in their Hanukkah stockings… Jim W. Dean ] 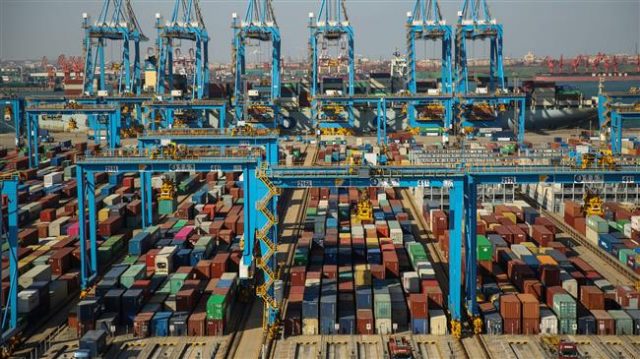 The United States and China have announced a “Phase one” trade agreement that reduces some US tariffs in exchange for what US officials said would be a large increase in Chinese purchases of American farm products and other goods.

“We have agreed to a very large Phase One Deal with China,” US President Donald Trump tweeted on Friday after officials in Beijing made a similar announcement.

“I think in agriculture they will hit $50 billion,” and take effect “pretty soon,” Trump told reporters at the White House.

A signing of the deal at ministerial level is expected for “the first week of January,” a senior Trump administration official told reporters.

The US has agreed to suspend tariffs on $160 billion in Chinese-made cell phones, laptop computers and other consumer goods due to go into effect on December 15. Existing tariffs on $120 billion of other goods such as smart speakers and Bluetooth headphones would be cut to 7.5%.

In return, US officials say, China is committing to increasing purchases in four sectors: agriculture, manufacturing, energy, and services. Purchases will hit “at least $200 billion dollars over the next two years,” the administration official explained, on condition of anonymity.

China has also agreed to suspend retaliatory tariffs, targeting goods ranging from corn and wheat to US made vehicles and auto parts, that were due to take effect December 15.

“To me it’s an enormously important first step in our relationship,” US Trade Representative Robert Lighthizer said.

The deal will provide more protection for foreign companies in China and Chinese companies in the United States, Chinese officials said.