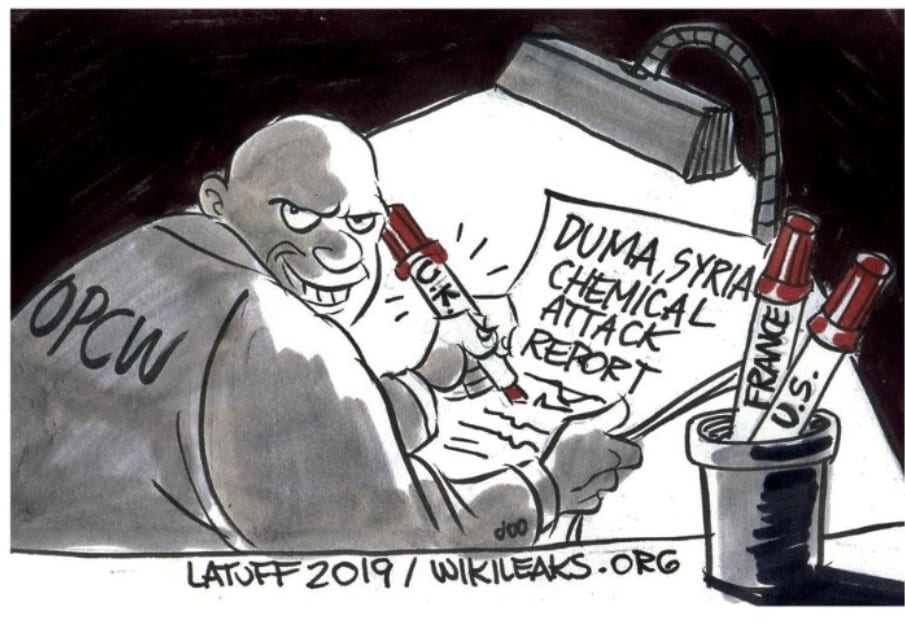 Stories that challenge establishment narratives go unreported because the media has been co-opted by the US government, a former Newsweek reporter has alleged, after his editors blocked him from writing about recent OPCW leaks.

Tareq Haddad announced his resignation from Newsweek last week, claiming that his editors had shot down his attempt to report on a leaked email which casts doubt on the OPCW’s findings regarding an alleged chemical attack in Douma, Syria, in April 2018.

In a lengthy article posted to his personal website, Haddad disclosed internal emails and messages in which he pressed his superiors about the issue, noting that Reuters had confirmed the authenticity of the damning leak.

ALSO ON RT.COMNewsweek reporter resigns after accusing outlet of SUPPRESSING story about OPCW leak that undermines Syria ‘gas attack’ narrativeApparently ignoring the merits of the pitch, his editors responded by accusing Haddad of misreporting previous stories that he had worked on.

Reflecting on his experience in journalism – Haddad had previously worked for the Hull Daily Mail and International Business Times – the ex-Newsweek employee offered a scathing indictment of western media.

The US government, in an ugly alliance with those [that] profit the most from war, has its tentacles in every part of the media—imposters, with ties to the US State Department, sit in newsrooms all over the world… Inconvenient stories are completely blocked. As a result, journalism is quickly dying. America is regressing because it lacks the truth.

Responding to Haddad’s resignation, Newsweek said in a statement that he had “pitched a conspiracy theory rather than an idea for objective reporting. Newsweek editors rejected the pitch.”

A new batch of leaked documents, released by WikiLeaks on Saturday, have corroborated the allegation that the OPCW suppressed and altered key findings in its final report on the Douma incident.

A new cache of internal documents reveal that members of the OPCW team tasked with probing the Douma “chemical attack” protested the organization’s final report on the incident, which they said misrepresented their conclusions.

In a memo addressed to OPCW Director General Fernando Arias, one scientist who participated in the OPCW’s fact finding mission (FFM) wrote that there are “about 20 inspectors who have expressed concern” over how the OPCW presented its findings on the alleged Syrian chemical attack. According to the memorandum, the organization’s final report does not reflect the FFM’s findings, presented in their interim report, which is also part of the new document dump.

The new documents, released by WikiLeaks, are the latest evidence undermining the OPCW’s final report on the Syrian attack.

RELEASE: Third batch of documents showing doctoring of facts in released version of OPCW chemical weapons report on Syria. Including a memo stating 20 inspectors feel released version “did not reflect the views of the team members that deployed to [Syria]”https://wikileaks.org/opcw-douma/

If you compare the original redacted report to the unredacted one that WikiLeaks released it’s really stunning the difference. Like for example the team decided not to exhume buried bodies because they couldn’t find evidence of chemical weapons this was kept from released report.

170 people are talking about this

The April 2018 incident reportedly killed dozens of Syrian civilians, and was used by the United States and several NATO allies to justify airstrikes against Syrian military targets. The OPCW was later sent to the site to investigate, and the organization’s final report gave credibility to the accusation that Damascus had used chemical weapons.

The memo goes on to state that the final report “does not reflect the views of all the team members that deployed to Douma.” In fact, the team on the ground in Douma was apparently excluded from drafting the final report – only one member of the fact finding mission, a paramedic, directly contributed. The final document was instead authored by a separate group that had operated from “Country X,” believed to be Turkey.

The team’s findings, outlined in their preliminary report, illustrate some of these inconsistencies. For example, the team expressed uncertainty about the origin of the cylinders which were allegedly used to release chlorine. Washington and its allies claim that the cylinders were dropped from the sky, pointing to Damascus as the culprit.

However, the original interim report said that there was no strong evidence to support this theory. In fact, a follow-up investigation into the matter concluded that it was more likely that the cylinders “were manually placed… rather than being delivered from aircraft.”

ALSO ON RT.COMOPCW report on Douma chemical incident omitted & misrepresented key facts, leaked email by dissenting inspector showsAfter the conclusions failed to make it into the final report, a FFM team member attempted to archive the analysis of the cylinders in a secure registry, known as the Documents Registry Archive (DRA). According to journalist Peter Hitchens, a senior OPCW official ordered his subordinates to “remove all traces” of the findings from the archive.

The documents support allegations made by whistleblowers – and corroborated by previous leaks – that the OPCW excluded and manipulated key findings in its final report on the incident.

Sputnik News: The publications challenge evidence from an OPCW investigation into the alleged chemical weapons attacks on 7 April 2018, which militants claim the Syrian Arab Army was responsible for – a stance backed by the US, UK, and France. The new release says the final report does not reflect the views of the actual participants in the fact-finding mission.

The WikiLeaks website has released its third package of documents concerning a chemical weapons report on the Syrian city of Douma published by the Organisation for the Prohibition of Chemical Weapons (OPCW).

It includes a memorandum written in protest by one of the scientists that participated in the fact-finding mission (FFM) – and the final report “with relevant comments from a member of the original FFM”.

The memo reveals that around 20 scientists (“the FFM core team”) who participated in the FFM in Douma were not involved in writing the final version and an almost entirely new team was assembled to contribute to the final report.

“This new team was staffed with people who ‘had only operated in country X’, according to the memorandum. It is not clear what country that refers to, except that it is presumably not Syria”, the website wrote.

The newly released batch also includes – for the first time – the preliminary and interim reports along with their redacted versions for comparison.

In particular, they contain information concerning the two chloride cylinders that are supposed to be the evidence of the alleged attack and were reportedly observed at two locations in Douma. It appears that some knowledge about the cylinders was deliberately omitted in the redacted version of the OPCW report, namely, the information about part-per-billion (ppb) concentration levels (used to measure the concentration of a contaminant in soils and sediments) and the actual origin of those cylinders. It also indicates how the final report went through significant changes discussed in e-mail exchanges by OPCW employees. 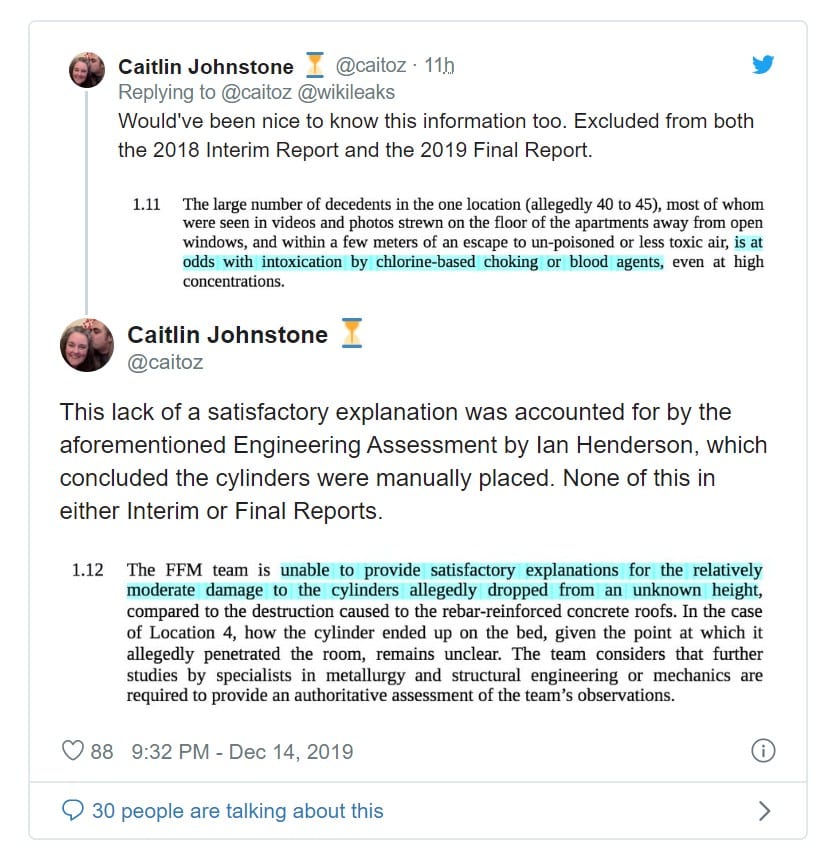 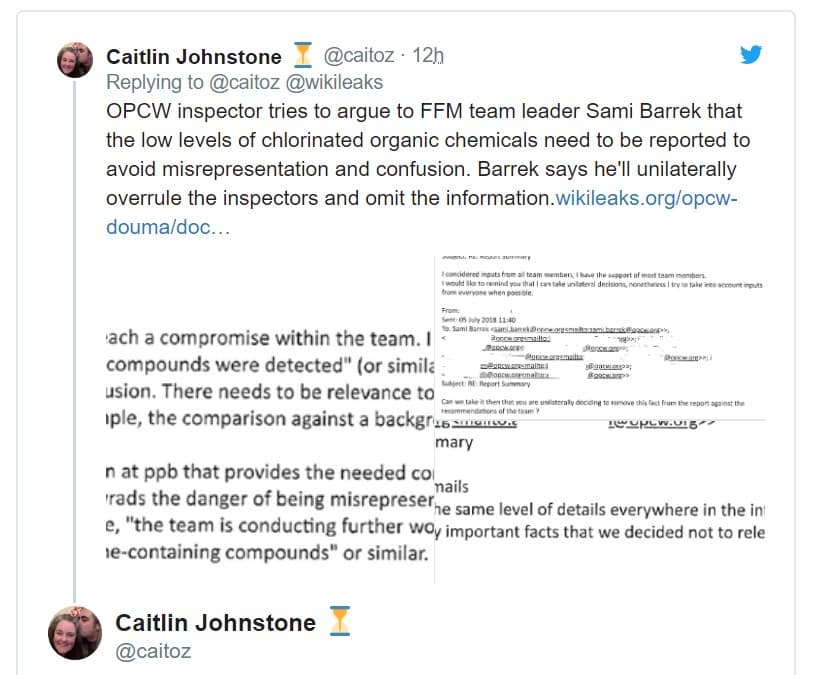 According to the author of the memo mentioned above, upon his return from the FFM in Douma, the author was assigned the task of analysing and assessing the ballistics of the two cylinders, but was excluded from the work, “for reasons not made clear”.

He accepted the task though with a clear understanding that he was “the most qualified team member”, the scientist said. According to him, he has been to locations in Douma, possesses experience in metallurgy, chemical engineering (including pressure vessel design), artillery, and defence R&D.

“In conclusion, I must stress that I hold no opinion, interest or strong views on the technical part of the matter, nor any interest in the political outcomes. My interest is in sound technical rigour; the science, engineering and facts will speak for themselves”, the author of the memo said.

In addition to be excluded from the work, the scientist was repeatedly denied updates on the final report and even forbidden from reviewing it.

He said that his current assessment was obviously that the FFM report is incomplete.

The WikiLeaks materials suggest that the final report by OPCW was intentionally doctored and mispresented by the body, through the deliberate selective omission of facts.

In a leaked e-mail published by the website on 24 November, it stated that the report didn’t contain evidence to substantiate that Damascus had used a chlorine agent in the attack since residual chemicals could be a part of household chlorine-based bleach and the exposure symptoms, shown on a notorious video published by the White Helmets, didn’t correspond with witness testimony. 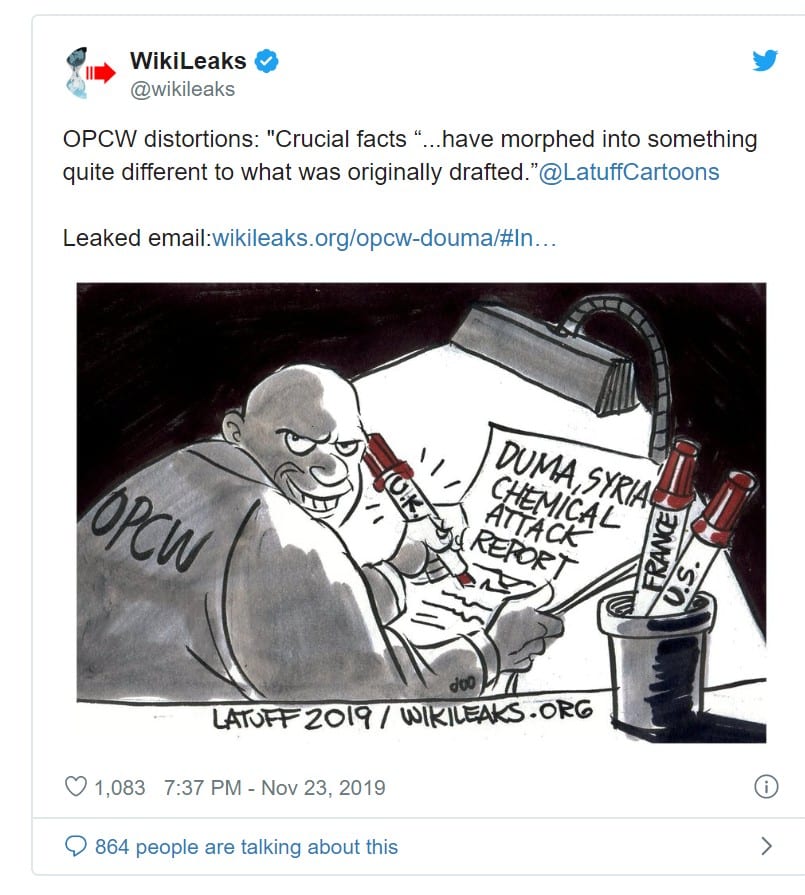 The White Helmets, who claim to be an NGO and a rescue organisation, have on numerous occasions been spotted working with the al-Nusra Front*, and working in areas where armed groups and outright terrorist groups operate.

On 23 October, the website published the findings of a panel that listened to testimony and reviewed the evidence provided by an OPCW whistleblower.

In March, the OPCW concluded that chlorine was most likely used in the suspected April 2018 attack in the city of Douma, northeastern Syria, where, according to local militants, cited by Western media, toxic gas came from cylinders dropped from aircraft. They claimed Syrian government forces who had complete air superiority at the time were responsible for the alleged attack.

An investigation was opened in light of the video published by the White Helmets showing the purported chemical gas attack in Douma and the OPCW relied on that information in their report.

The footage showed the White Helmets administering unknown medicine and pouring water on several people at a local hospital, including children to allegedly treat them for the effects of the attack. It was used by the US, UK, and France to justify massive missile strikes against Syrian military targets, accusing its government of the atrocity despite a preliminary OPCW report not being ready.

Russian officials revealed that the equipment used to make advanced explosives and chemical weapons at labs in recently liberated Douma had been made in Europe and North America. Syrian President Bashar Assad also accused Western powers of using “stories” about the Syrian Army’s use of chemical weapons as a “pretext for direct military intervention” against the country.

The Russian Foreign Ministry stressed that the OPCW had ignored evidence provided by Russia and Syria, confirming that the attack had been staged by the White Helmets, and expressed concern that the document sought to justify foreign strikes against Syria.