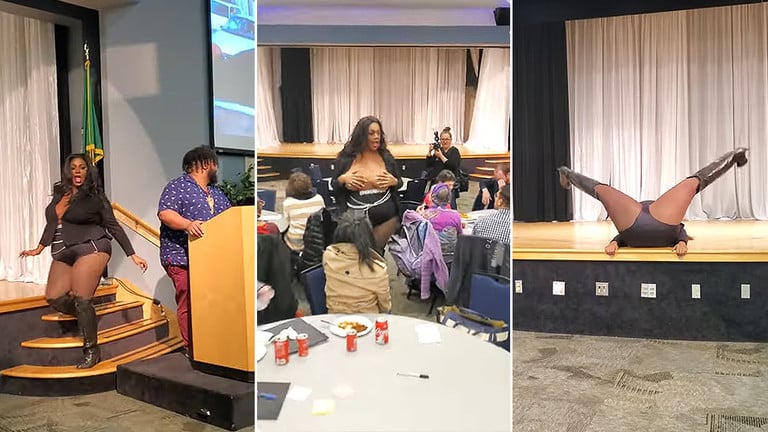 Get this. Instead of joining the American people in order to challenge the government and stop perpetual wars in the Middle East and use the war money to get people off the streets in big cities in America, local leaders offer the homeless population transgenderism in King County, Seattle. Not only that, they used taxpayer money to do so.

An adult performer by the name of Beyoncé Black St. James put on what a strip show in order to entertain a group of homeless advocates. What was the name of the conference? “Decolonizing our Collective Work.”

“It wasn’t clear to attendees that the organization had planned a strip show for the conference. According to the Seattle Times, the agenda simply explained participants would attend a “Lunch with Cultural Presentation. There was no meaningful ‘cultural presentation.’ It was just a transgender woman who lip-synced and stripped, revealing silver nipple coverings and a bodysuit.

“Some participants handed her dollar bills, while some others looked clearly uncomfortable. At one point, St. James appeared to place her breasts on a participant’s head. At another, she rubbed her backside up against a woman in a chair and then caressed the leg and chest of a man. St. James would later use her mouth to take a dollar bill out of his. Then, of course, some twerking. To be clear, St. James is not to blame. She did what she was hired to do. The organizer behind this is the one at fault.”

The video can be seen online:

Christopher Rufo, an independent journalist and filmmaker who has been outspoken on the issue of homelessness, was rightly outraged: “I think this was really a boiling point for people, because they are saying, ‘You’re asking taxpayers for money, and then you are squandering it on something totally inappropriate in any work place, especially when you are using taxpayer funding,’”

What we are seeing here is that there is no line that the oligarchs won’t cross in order to advance their pernicious agenda. This is also an indication that the oligarchs are regurgitating an old strategy: in order to subvert the morals of a culture, you have to inculcate what Nietzsche termed the transvaluation of all values. This diabolical idea is also Masonic in its political orientation. And we have seen its ramifications during the  events leading up to the French Revolution.

In fact, Freemasonry seemed to have been the revolutionary engine during that era, and messianic mood was in a state of flux. It was in the same century that Jewish messiah Jacob Frank (1726-1791) was proclaimed to be the reincarnation of Sabbatai Zevi, another Jewish messiah who superficially converted to Islam in the seventeenth century. Philo-Semitic historian Paul Johnson tells us that Frank “was initiated into secret Shabbatean rites, by followers of the extreme wing of the movement.”[1]

Johnson is a skilled historian, but on many occasions his Philo-Semitic overtone trumps truth. (We will come back to this issue in more details when we look at the issue of slavery, which has been postponed again until next month.)

The Sabbateans taught that it was permissible “to have sexual intercourse with someone else’s wife or one’s own sister, or even—though only in secret—with one’s own mother.”[3]

One Sabbatean admitted, “As I am old now, I no longer do it, but twenty years ago (and I have professed this faith for twenty-four years), I had carnal relations with the wife of my son…”[4]

Christianity, of course, is against all of that. And it is understandable that “becoming a Christian—whether voluntarily or under coercion—turned into one of the most powerful taboos in medieval and early modern Jewish society and came to be firmly associated with ‘physical violence, sexual degradation, and spiritual annihilation.”[8]

In the process of time, many Jews tried to either “kidnap or even kill converts or prospective converts,”[9] which is another way of saying that the term “Jew” ceases to have an ethnic meaning and therefore has a theological meaning. “The last recorded case of a father murdering his son who had expressed wish to become a Christian comes from 1869.”[10]

In a nutshell, Maciejko says that “the Sabbatians engaged in secret antinomian rites: they practiced necromancy, masturbated and then smeared the whole body with the semen, permitted or even encouraged incest, practiced wife swapping and group sex, advocated a complete sexual freedom, and ‘permitted perjury, theft, and adultery.”[11]

In other words, the Sabbatians would have been impressed to see people like Sarah Silverman on stage practicing “Jesus is Magic” and Beyoncé Black St. James doing her transgender performance. The inevitable parallel between the French Revolution and the oligarchic system in King County was that they both produced sexual decadence among the masses. Both operated under a revolutionary ideology, which again is Masonic.

The oligarch and indeed the Deep State figured out long ago that the best way to control people is through sexual liberation.[12] And the fact that none of the major news outlets has actually reported the Beyoncé Black St. James debacle means that they are indirectly in cahoots with the oligarchic system.