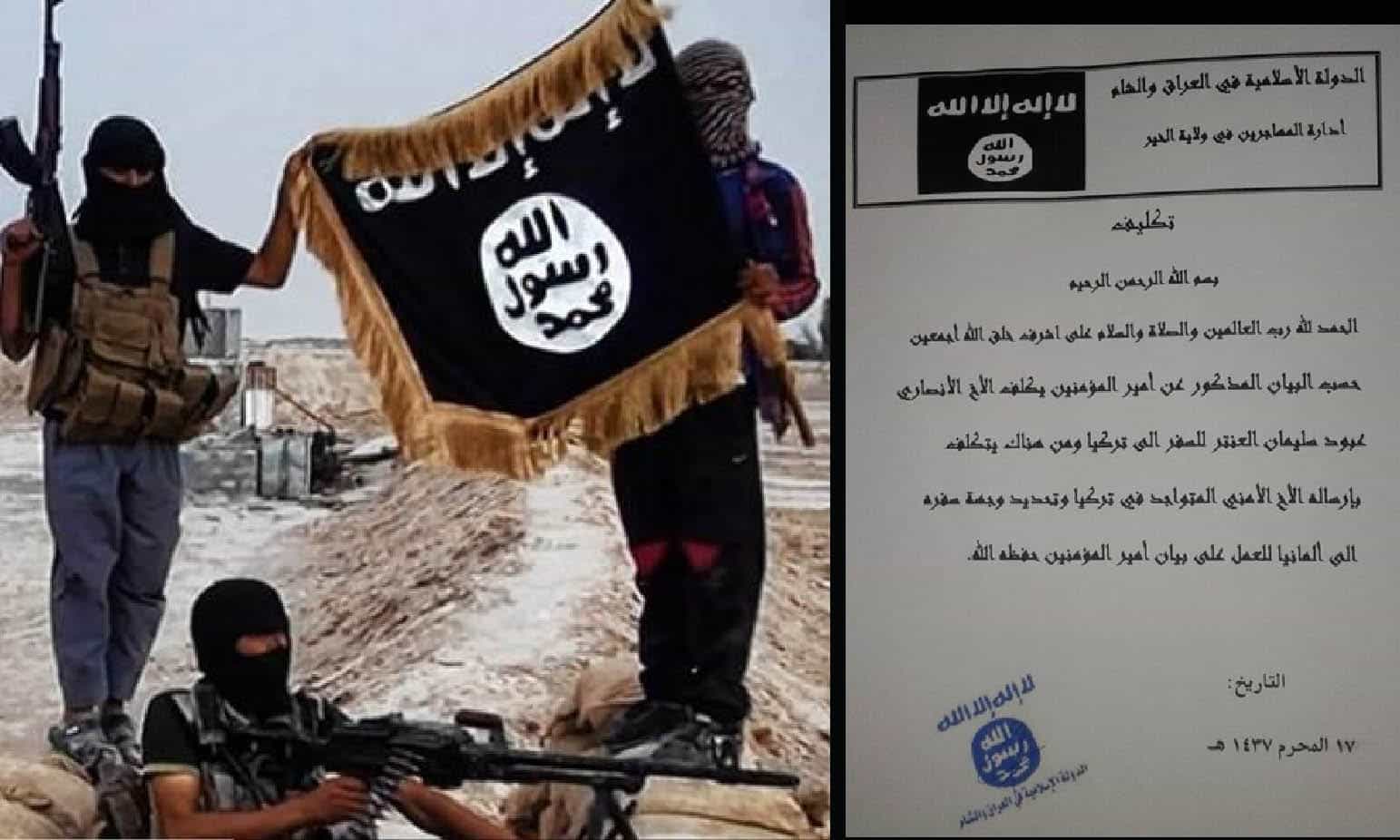 «The Defense Intelligence Agency (DIA) reported to the DoD OIG that, according to open sources, ISIS exploited the Turkish incursion and subsequent drawdown of U.S. troops to reconstitute capabilities and resources within Syria and strengthen its ability to plan attacks abroad. According to the DIA, ISIS is “postured to withstand” al-Baghdadi’s death, and probably will maintain “continuity of operations, global cohesion, and at least its current trajectory.”».

The alarm is contained in the last Pentagon’s periodic military reports. But it confirms the one exposed by the numbers across the last report on the November attacks released by the Rojava Information Center. But there is more …

Letters of assignment with the ISIS brand published by the Kurdish news agency Hawarnews show that Islamic black flag terrorists have sent their fighters on missions to Europe with the help of MIT 007, Turkey’s intelligence, a NATO country … The secret documents are of such great importance that the counter-intelligence of some European countries would have started investigations on the contents of the 18 letters.

There is also a need to understand what the role of Turkish intelligence has actually been, which really seems to be closely connected with the soldiers of Daesh. This correspondence could explain how one of Syria’s executioners arrived in Hungary where he was even found with the credit card provided by the European Union for refugees. His name does not appear in the letters, difficult to translate and interpret because all obviously in Arabic, but the mechanism alone is sufficient to explain it.

It’s not all. It is always the US intelligence, as reported by a reporter of Turkish origin on the Swedish media Nordic Monitor, specialized in the publication of intelligence documents, to reveal that 90 per cent of all Foreign Fighters arrived in Syria passing through Turkey as also admitted by the Executioner of Raqqa, captured by the Kurdish SDF (Syrian Democratic Forces) militias who freed the last jihadist stronghold of Bagouz last spring, and by other prisoners FTF (Forreign Terrorist Fighters).

Financed the massacres of Paris and Brussels: the Raqqa’s butcher could return free together the other ISIS Foreign Fighters

Finally, as reported by an article by the Syriana Arab News Agency, Russian President Vladimir Putin, a faithful ally of Damascus but also of Ankara, seems to have lost his patience and in a December 11 call to Turkish President Recep Tayyip Erdogan. “The need to fully implement the Russian-Turkish agreements on cooperation in Idleb Province and north-eastern Syria was underlined, and the need to intensify efforts to combat terrorism in these areas,” the Kremlin reported.

While Sana writes “He indicated that the Turkish regime has for years transformed the lands of Turkey into positions and corridors for terrorist organizations and has provided them with various types of support, including Daesh (ISIS) and Jabhat al-Nusra and bought the Syrian oil that was stolen from Daesh ». But let’s look at the individual issues in detail.

LETTERS TO SEND JIHADISTS IN EUROPE

«All the letters of assignment are addressed to the various militiamen with name and surname. In them they are ordered to move from Syria or Iraq to go to Turkey and once there contact the contact person for security and then continue to Germany to the place indicated by the contact in Turkey». An anti-terrorism expert reports after having obtained the translations that leave a single important question open: it is not clear if by “security referent” we mean an ISIS employee or an MIT agent.

It must be remembered that the network of militiamen of the black flag, being totally clandestine, is not equipped with a specific security apparatus as, in fact, all the leaders and soldiers carry out espionage and counter-espionage activities. Furthermore, the involvement of MIT appears likely, in light of the repeated connections with Turkish intelligence, thanks to the detailed testimonies of prisoners captured by the SDF.

Obviously the conclusions of the Kurdish agency are more peremptory.

«Hawar news agency (ANHA) obtained documents confirming the supervision of Turkish intelligence on the offices of ISIS mercenaries in Turkey, whose mission is to facilitate the transfer of mercenaries from Syria to many European countries via Turkey» writes ANHA.

«Among the documents obtained by our agency, letters marked with the ring of ISIS mercenaries addressed to the so-called “security persons in Turkey”. They are requested to facilitate the travel of the person named in the letter to Turkey, including to facilitate travel to one of the European countries for the tasks assigned to them through instructions directed to him by “security in Turkey.” The letter states that the instructions to assign the person were directly issued by ISIS leader Abu Bakr al-Baghdadi» reports the agency recalling that, in recent years, ISIS mercenaries have carried out a series of terrorist acts in many European countries.

«Turkey is considered a bridge for the transfer of mercenaries from Syria and Turkey to European countries, where Turkey exploits the elements of ISIS to blackmail European countries and put pressure on them to surrender to Turkey to implement its plans in the region, especially in Syria – we can still read in the article published a few days ago together with the images of the letters – Hawar news agency AHHA obtained a list of names of ISIS mercenaries who were assigned official letters to move to a number of European countries via Turkey and under the supervision of the mercenary office in Turkey, which is supervised by Turkish intelligence” MIT”».

FULL REPORT AND ALL DETAILS HERE