In 1997, singer, songwriter John Denver died in the crash of homebuilt aircraft off Monterrey, California. He wasn’t dead for an hour before they began to murder him, his memory, his music, and his legacy.

John Denver is remembered as an abusive alcoholic, a fake environmentalist, a spoiled rich kid who really wasn’t from Colorado at all but rather from Kansas. We were told he was a horrible person.

Let’s look at another. The USS John F. Kennedy will hit the water in 2022. Were one to judge presidents over the past 100 years, the list is simple:

We have a Ronald Reagan airport in Washington and have long had a Reagan carrier along with a Gerald Ford. I knew Ford and liked him personally but he was a political mediocrity at best. Reagan was an asshole, pure and simple, a jingoist and fake who belonged in prison and whose administration was a sewer of drug smugglers, arms dealers, and thieves.

He was an “acting president,” a total fake.

They took on Kennedy, not so much because of who he was, and those of us who were alive then remember, it wasn’t the fake “Camelot” that they hated, and they control everything we read, see and hear, love to whine about. Kennedy was a rebirth for all of us; courage, heart, charm and intellect, something we haven’t seen since, not one iota of it.

Murdering his legacy with smears has become a cottage industry for them.

There are a few of us around, increasingly past our sell-by dates, who admired JFK and sought, within our own limited abilities, to make a difference. If any exist today, they will be banned from YouTube, Facebook, Google, smeared by the ADL and SPLC and kept off the networks, replaced with continual coverage of the personal failings of Alex Jones, a talented actor hired to play a bigoted asshole.

Behind all of this is something worse, but you knew that. Our entire history is fake. All of it.

Attempts to correct fake history are termed ‘revisionism.’ Telling the truth is “revising” lies, something they don’t want to be done. Thus, revisionists are bad people and have to be smeared, even jailed. So many have been jailed.

Back in 1938, former US President Herbert Hoover went to Germany to talk with Adolf Hitler.

Some of the stories of this discussion are in his book, Freedom Betrayed, though I personally suspect much had been edited out. The book was censored for 50 years and is now only in print at the behest of a right-wing extremist think tank. 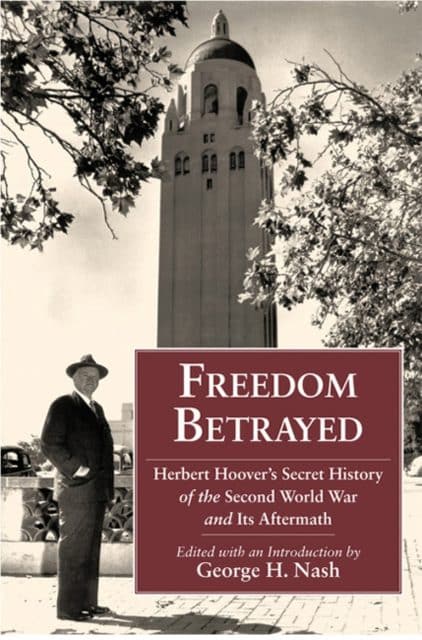 I am going to limit this talk today, though I spent a couple of decades involved in historical archaeology. If we go beneath the surface, we learn such things as why the British stopped Jews from emigrating to Palestine.

That’s because they were allied with Hitler, and the Brit’s thought a strong Jewish-German based Israel, and the one we got was Soviet communist-dominated and still is, would threaten the Suez Canal.

You see, many of the Jews who would head to Israel were not former British officers, like in the fake book/movie Exodus, (Leon Uris, however, was a Marine combat vet during World War II). They were German officers, thousands and thousands of them, among Germany’s best, all Jews. Oops.

What did Hoover learn from Hitler?

The lies go so much further than you ever thought.