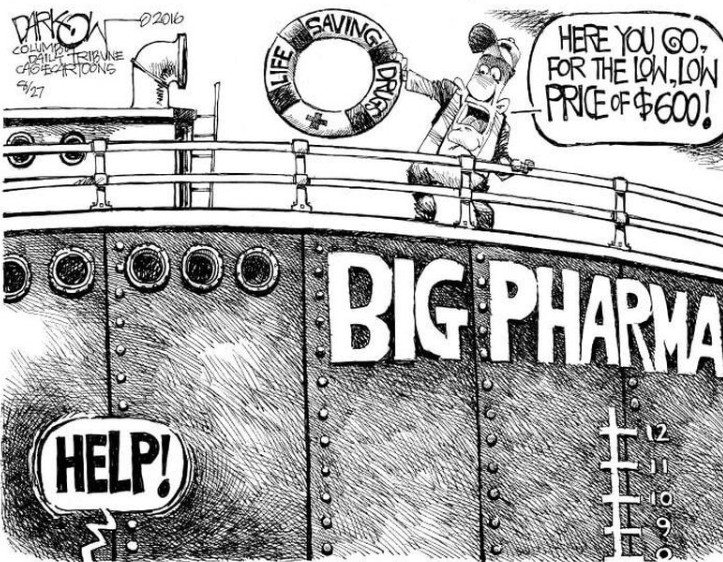 Mike’s Notes: Well, the hypocrites in congress, which are most of them, have done it again. While both Republicans and Democrats are campaigning on lowering health care costs, they have listened to their real bosses, the health care lobby, and are going to allow costs to rise even further. This stab in our collective backs is the result of a bipartisan effort. It is sad that the one thing that a majority of both parties can agree upon is to put their own interests above those of the American people.

Health care debt is the number one reason for bankruptcy in the United States. In poll after poll, cost of health care always rates as one of the top concerns.

Many hospitals are now filing lawsuits to collect their exorbitant fees from those who have no way to pay them. Their paychecks are being garnisheed or in some cases they are put in jail with the amount of bail being set at what they owe. Debtor’s prisons have been illegal for over a hundred years but clever lawyers have figured out that if a judge issues a judgement and it is not followed, the debtor can be jailed for “contempt of court.” In many of these cases the person is not even aware that they owe the money thinking that it has been paid by insurance.

Big Pharma has taken greed to new levels in recent years, gouging those who really have no choice since they would die without the proper medication.

Last week, the FDA approved a new drug to aid in the treatment of cystic fibrosis, a very serious and debilitating disease. In tests this new drug is showing a lot of promise for many suffering patients. This is good, but one year of treatment with this drug will cost $300,000. How many people can afford this? For those with good insurance, how many bean counters at the insurance company will approve this cost?

I have a relative who is a type 1 diabetic and she must have insulin injections every day to stay alive. The insulin that she takes was developed in the 1930s using basic research paid for by the US government. She has to pay $800+ a month for her insulin. Talk about a return on investment. The drug company recouped their development costs over 70 years ago and production costs are tiny.

If an individual loaded his pickup truck with cases of water, drove to a disaster site and tried selling them for $30 per case, he would, rightly, be charged with profiteering but a multi-billion dollar company has the political influence to avoid this.

I could site many other examples and I am sure that most of you have your own horror stories or know people with them.

Vilified by lawmakers from both parties for months, the health-care industry this year appeared to face an existential threat to its business model.

But this week, pharmaceutical companies, hospitals, insurance companies and medical device manufacturers practically ran the table in Congress, winning hundreds of billions of dollars in tax breaks and other gifts through old-fashioned lobbying, re-exerting their political prowess.

“It’s the ‘no special interest left behind bill’ of 2019. That’s what it feels like this is,” said Andy Slavitt, a former health administrator who served in the Obama administration. “There’s no other explanation.”

Support came from virtually every corner of Congress.

A bipartisan push to curb the practice of surprise medical billing was delayed until next year, with Senate Minority Leader Charles E. Schumer (D-N.Y.) working behind the scenes to raise objections to the package, according to three people familiar with the talks who spoke on the condition of anonymity to share details of private negotiations.

And through a flurry of letters and targeted meetings with freshman House Democrats, the health-care industry ginned up broad support for repealing taxes that were central to the 2010 Affordable Care Act. Even House Speaker Nancy Pelosi (D-Calif.), one of the law’s architects, agreed to go along.

The success shows how formidable the health-care industry remains, able to overwhelm Democrats with well-honed talking points and splinter Republicans through a concerted push.