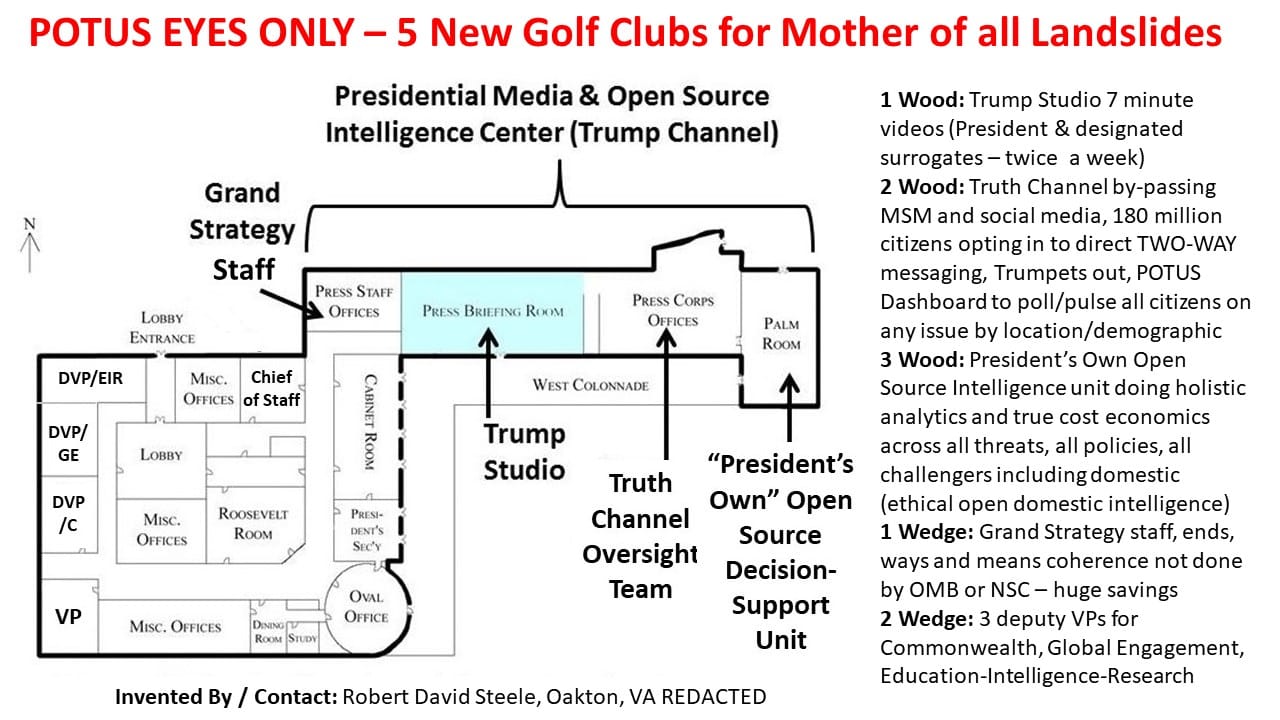 In 2016, after Reince Preibue and Sean Spicer refused to deliver my ten page memorandum to the President that was given to them via Federal Express, I was fortunate to have Zero Hedge publish Former CIA Spy Has A Christmas Message For Trump on 24 December 2019.  Over a million people ultimately read that message (190,153 recorded at Zero Hedge, the rest at Phi Beta Iota and other publications).


And here is the transcript with a tip of the hat to YouTube for making this possible.

00:18 God bless you Mr. President I know you’re busy I did a Christmas message to you [in 2016] that was read by over 1 million people after it was featured on Zero Hedge after your election when it was not delivered to you when I sent the 10-page memo to Reince Priebus and Sean Spicer like Chris Christie’s work on the transition you were deprived of ideas that might have helped you do more.

00:42 You’ve done wonderful things 289 new things according to the Washington Examiner but there’s more to be done

00:49 Here in one graphic I’m giving you 5 ideas that I’ve championed for a while but I think that you need to consider them for 2020 time is the one strategic variable that cannot be bought and it cannot be replaced we cannot wait until after you’ve been reelected to do these five things or at least some of these five things that’s your call

01:12 I humbly and respectfully propose that you consider vacating the press area in the White House these people are scum and they are betraying the public trust every single day there is no reason for the most precious real estate on the planet to be wasted on scum instead I propose you consider five new golf clubs.

01:35 I’m calling them three new woods and two new wedges Wood number one is a Trump Studio where you can walk in anytime dayor night and tape a short video to America that is then pushed or pulled depending on how you want to handle it this also becomes where you can have people from your administration and foreign leaders and others come to you you talk about what message you want them to give out and then they go in and they tape a short seven-minute video

02:05 Over time we create a matrix a mosaic of what you feel Americans need to know in order to be engaged conform citizen to restore democracy Trump studio one would number two is a Truth Channel we have to bypass what I call #GoogleGestapo or Big Tech.  Google is manipulating surveys Amazon is banning books and reviewers and reviews Twitter is blocking you from reaching your full hundred-percent potential YouTube is censoring and deplatforming people

02:41 You need your own social media ecology and this can be created within 30 to 60 days very quickly it would allow you to TRUMPET out to over 180 million people what you’re getting with Twitter today is chump change 180 million citizens can be reached by you if you follow this idea for two wood. This would also give you a two-way channel so that you would have a presidential dashboard where you can pull and pulse 180 million citizens by demographic by location and by issue no one has this today

03:21 Your number three wood is your own presidential open-source intelligence capability no more than six people with a robust budget OMB has actually approved this as a new agency at two billion dollars a year but CIA has fought me on it for 30 years

03:38 The beauty of open-source intelligence or decision support is you can share it with Congress the press and the media and the public as well as foreign allies and you can do domestic decision support which means you can do comparative trade you can do the kinds of things you need to do in relation to governors and andcounties and specific local issues

04:03 Your first wedge in my opinion is a Grand Strategy Staff neither OMB nor the National Security Council do grand strategy they don’t actually make a coherent package for you out of ends ways and means a grant strategy staff will do that

04:49 if you would have those three individuals and actually give them offices in the White House in combination with the ideas that I’m giving you for the now wasted press area you would actually finally have a command and control building with everybody right there and you would be able to move heaven and earth to create the greatest country the world has everseen

Two other links bearing on this White House upgrade:

Forthcoming: REINVENTING ENGINEERING: The Ultimate Hack –  Creating a Prosperous World at Peace with Open Source Everything