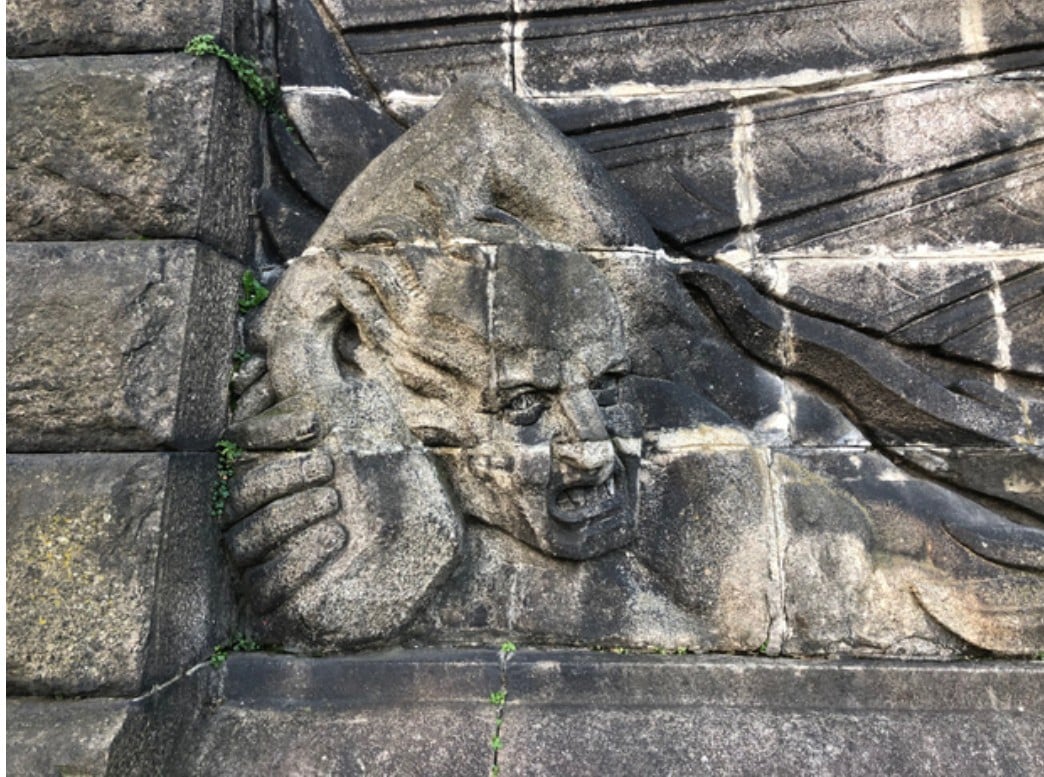 I spent my last day in Germany with Orage in Koblenz, an ancient city straddling both banks of the Rhine where it’s joined by the Moselle. As I gazed down at the deep surging water where the pier comes to a point at the confluence of the rivers, fish boiled on the surface.

They looked like large shad, but they were being worked by seagulls, leading me to believe they were a predatory species, tearing up baitfish. The rivers not only bore the endless traffic of three hundred foot cargo vessels engaged in frantic trade, but they were alive as well, testimony to German resolve to live within their environment without despoiling it.

High above, a trolly offered rides over the Rhine to a fortified castle on the far bank. On the side of the river we were on, hundred foot ferry’s offered sightseeing excursions down river. In the fading light I posed for a few pictures with the castle as the backdrop. Orage snapped about half a dozen photos with my iPhone and looked up from the viewfinder puzzled, muttering that the pictures were not coming out right. When I looked at the pictures, on all of them, the castle seemed aglow in a peculiar orange light that gave it an artificial appearance as if it had been airbrushed into the picture.

We had extensively photographed the giant equestrian statue of Wilhelm I, dedicated to the unity of the German Empire in 1955, but built in the latter half of the nineteenth century. It was bombed by the Allies during WW II, and after much consternation and hand ringing among politicians, it was finally rebuilt in the nineties. The statue itself depicts Wilhelm perched victoriously upon his great war steed, led by the reins by a winged female entity.

The winged female entity, described by default as a “genius” by academics ignorant of both ancient Goth lore and the visitations of Ishtar to the Knights Templar in the Holy Roman Empire so long ago, is strange enough. But the carvings on the monument that support the statue must forever remain an enigma to the fish eyed academics ceaselessly propagating the historical fabrications of depraved Benedictine monks and the sycophants of an empire driven to madness through its own greed.

In the front part of the monument is a mural of a great bird, perhaps an eagle but more likely a Phoenix born of fire and risen from the ashes of its own destruction, swooping down upon the observer. Clutched in its talons are fire and six writhing vipers. To the left reclines what can only be described as the Devil and in his hand he holds a rock, the Grail itself, the Garil or Black Stone of Ishtar guarded over for eight hundred years by the Knights Templar and the SS…

At the top of each corner of the monument is the head of a king, his fangs and talons imbedded in the sun. There are eight fanged kings in accordance with the eight sided temples known to have been built by the Knights Templar, the last and the greatest being built by Fredrich II in Italy. This is homage paid to the eight pointed star of Ishtar, their Goddess who long ago promised to lead them from bondage in a war to end all wars with the god of the pope and all his agents.

We had no time to contemplate what we had seen and photographed, it was off to Frankfurt where I was scheduled to take a 9:30 AM flight to Detroit, where I would wait six hours for a connection to Kennedy Airport in New York City, the place I lived all my life. With hours to kill, I went upstairs and drank overpriced beer in front of McDonalds at a table in a German café across from the American monstrosity.

Wasn’t long before I noticed a very strange looking little man dressed in dark clothing and a cheap snorkel jacket with the hood pulled over his head as if it were the middle of winter, which it wasn’t. It was about fifty degrees outside. He was carrying a shopping bag filled with only god knows what, standing at the perimeter of the café behind a large plastic tree staring at me intently. I stared back and laughed at him. He looked for all the world like the guy in the Arlo Guthrie song Coming Into Los Angeles: “No, he couldn’t look much stranger / Walking in the hall with his things and all…”

I tried to take his picture, but he moved behind the plastic tree, keeping himself strategically out of my view finder. When I pointed him out to the waitress, it was only me and her and she had already noticed him, we both laughed at him. It didn’t bother him, he kept staring and I thought about getting up and asking him what his problem was but then thought better of it. I wasn’t about to have my departure delayed by having to slap around a crazy person at the airport. After about a half hour, he went downstairs never to be seen again.

Finally succumbing to the beer, I went downstairs myself about a half hour later and resolved to get some much needed sleep in the chairs in front of my Delta / Air France check-in gate, which would be open in a few hours. I awoke to some women setting up for Delta and when I asked a woman told me they would be open within the hour. I went upstairs and had a particularly vile, even for McDonalds, “egg sandwich…”

When I came back down, I got my boarding pass and the same woman who had told me they would be open within the hour was standing in front of the check in gate. She told me that I had been selected for additional security screening and that she was “head of security.” My flight would be delayed till 11 AM and that I should arrive at boarding for nine to compensate for the additional time it would take. She asked me how long I had been in Germany, keep in mind I hadn’t even been through customs yet…

I got to boarding a little before nine and passed through customs without a hitch and figured there had been a mistake. There were only two planes boarding at the five E gates beyond customs and one was delayed for almost two hours, but there were about half a dozen German police officers standing around trying to look hard. One, an attractive blond brandishing a Heckler Koch MP 5 caught my attention. I walked up to her looking, thinking to myself I love a woman who knows how to hold a machine gun and another cop across the room saw me and smirked.

After standing on line for an hour I get to the guy who’s supposed to get the final swipe of the boarding pass and he tells me I’ve been selected for special security screening. He tells me to follow him and he leaves his post taking me to a windowless security room with about five people in it. They are all joking in accented English about the guy I was getting being the biggest ball buster. The man, very German, in his mid-thirties and definitely in charge, seated at his desk, replied “I am the best.”  He told me to sit down and I asked him what he needed. He quipped money. He then halfheartedly felt around my ankles and told me I was done, to get back on line…

When I went through customs in Detroit all I was asked when I showed him my passport was “any relation to the hockey player?” I’d been being asked that ever since I was about ten years old and Phil Esposito; the legendary Detroit Wing forward had his first sixty goal season. When I got to Kennedy after walking over a mile to baggage claims, I found my luggage was not on its designated conveyer. Still having to catch the trains to Long Island, and past midnight, exasperated I went to the claims office and showed them my ticket. They told me “we have your luggage” and told me to go to the far corner of the cavernous baggage claims room. When I did I found my suitcase sitting there waiting for me…

God Yule to all of you! – I know the solstice will bring renewal. – Orage