All of us want to make the world a better place for everyone. 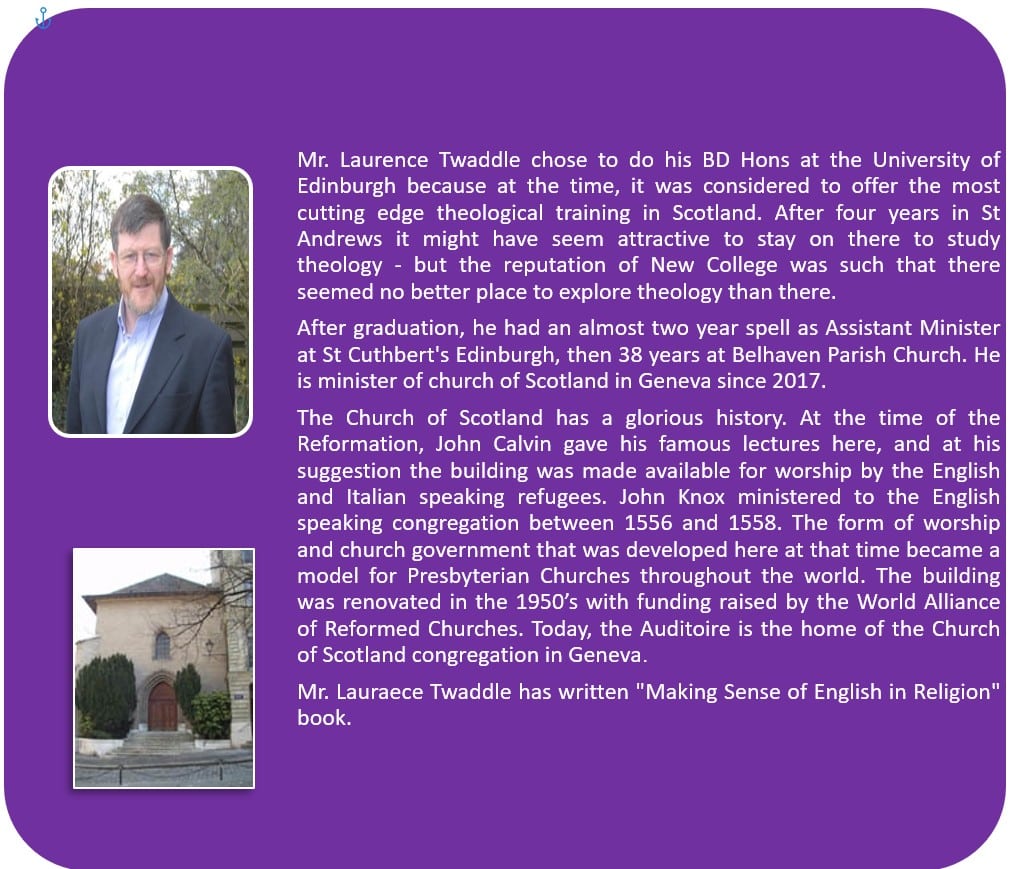 Association for Defending Victims of Terrorism Public Relations – Laurence Twaddle, minister of Church of Scotland in Geneva, emphasized contradiction between the aims of religions and terrorism.

What do you think about the misuse of religion by terrorist groups?

So this a terrible misuse of religion to take those scriptures and some other to test them around to seek your own ends and to give some spurious Religious justification to do what are doing.

Yes, it is strange how different groups all across the history of, taking a label Christianity Judaism Islam, and have used it to justify the things that they do. Christians who hear about how these religions is about knows that they were not about terror, they were about peace, about brotherhood about sisterhood, were about building bridges not building walls were about caring for one another about loving one another bless the peacemakers. So this a terrible misuse of religion to take those scriptures and some other to test them around to seek your own ends and to give some spurious Religious justification to do what are doing. And many moments of good hearts who love those faiths know that to tarnish them by associating it with terrorism is just ugly and wrong.

What measure we can take to prevent terrorists from the abusing the religions?

You would like some kind of dialogue with people who espouse these ugly doctrines.

Terrible things to destroy so we can do that you would like some kind of dialogue with people who espouse these ugly doctrines.

I am sure that we can talk and love to sit down with   somebody who tries to justify blowing up of Pixar restaurant an all kinds of folks Muslims, Christians, Jewish, unbelievers. They don’t ask their identity card before deciding who they want to kill. They just do it indiscriminately.

What do you think about the perspective of Christianity about killing of innocent people?

Well, as we say in the UK it does no back in history, no relation to things we have understood as the essence of trust and meaning of Christianity is about fellowship and loving a neighbor not killing a neighbor.

Being peace maker not being warmongers so how do you heal and amend and make better for people make the world better and fill it with .

Love and joy that is Christian perspective so there is disconnect between anyone saying in the name of Jesus Christ and blowing up the shoot up innocents it is utterly illing should person kill person whole Christian ethos and all rouge minded lover of the faith with ever sanctions use of violence or of terrorism.

Being peace maker not being warm makers do heal and amend and make better for people and make the world better.

What do you think about the cooperation between religions in countering terrorism?

I think this is the interest of all of us to make a clear to folk don’t really carefully think about things that we are in the same business we all love God, we want to serve him and we want to make the world became better to be. So all of us to distance ourselves from anything undermines that more creation of people there is some connection between religion and terrorism entirely oppose the end of spectrum and it is a good thing and important exercise to gather the voice people and we like people to know whatever they are  choose to on this label the terrible deeds and to use any religion  for that is twisted corruption of the two thing so yes  I love what you said cooperation and speaking one voice on that subject so there is no doubt that to be religious on to be true believer when you will off course no one wants to bloody hands terrible deeds.