[ Editor’s Note: We finally have a challenge to Merkel’s refusing to respond to US sanctions with German ones by one of Germany’s top energy experts. And it is one that makes a lot of sense.

Stephan Kohler zeroes right in on the key issue of the US wanting to disrupt any EU improvement in relations with Russia, as that screws up the Trump-Neocon divide and conquer game it loves to play.

Merkel figures that if she imposes sanctions, the US will respond with more sanctions on top of the ones it already has on the EU as it did with China, and now has shown that they worked with China.

She knows the Nordstream 2 pipeline will be finished, with some delay due to finding a contractor that has no exposure to US sanctions, so she will defeat Trump that way.

Trump also feels threatened by the Normandy Four progress and the Ukraine gas transit deal recently solved, along with legal claims from both sides. As VT has editorialized, stability and friendly relations are hated by the Deep State, as that hurts their chaos theory plans where they make a lot more money.

As China works its way out of sanctions by increasing US imports, they will become a blunt instrument for Trump to use on others. But Huawei has no US components in its phones anymore, and it will not use any in its 5-G. It’s on its way to beating out Samsung as the largest seller, with US suppliers kissing goodbye to those export sales to Huawei due to Trump’s dumb move.

Trump will claim victory, sweeping the lost export sales of the former US suppliers under the rug. Many of them are in California, which Trump writes off politically anyway.

What Trump has done now is put the whole world on defense for protecting from US sanctions, which ultimately hurts our own companies. I can see the day when other trading blocks ban doing business with countries that sanction… Jim W. Dean ] 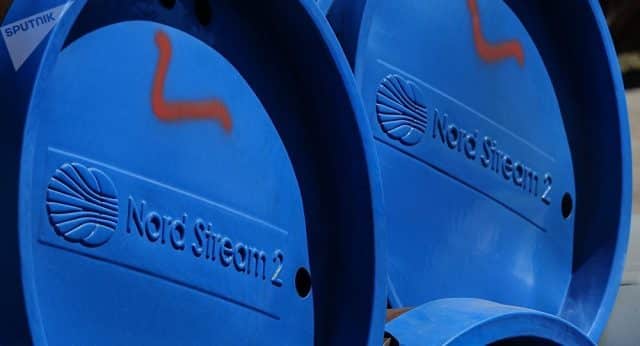 Last week, the US administration imposed sanctions on the Nord Stream 2 pipeline, a joint venture of one Russian and several European companies, despite Germany’s and Russia’s numerous statements that the project is purely economic and not political.

Germany should impose sanctions against the United States, otherwise it will lose its independence, Stephan Kohler, a renowned German energy expert and head of EnergyEfficiencyInvestEurasia GmbH, told Sputnik. The expert analysed the reasons for the US sanctions against Nord Stream 2, which, in his opinion, are supposed to drive a political wedge between Russia and the EU.

According to Stephan Kohler, there are two reasons for the US sanctions. First, the United States is interested in selling its LNG to Europe. However, the current price situation shows that LNG from Russia or Qatar is cheaper than from the US. That is, the United States is non-competitive in this regard.

“What I find much more interesting is the political aspect. I think the Americans have no interest in Europe and Russia getting closer again. This is precisely why the sanctions are being introduced: to further drive a political wedge between Europe and Russia”, Kohler said.

According to the German energy expert, the sanctions were pushed ahead quickly after the heads of Russia, Germany, France, and Ukraine made progress at the Normandy Format meeting in Paris.

“It’s at this very moment that they are focusing on sanctions. That is, besides economic interests, there is, above all, US political interest: they want to greatly disrupt the rapprochement between Russia and the EU”, the former head of the German energy agency DENA, told Sputnik.

The expert described the US sanctions against Nord Stream 2 as severe, but not tragic.

“This is a specific impact on Nord Stream 2. I think Nord Stream 2 will be completed, but construction works will slow down and take more time”.

According to Kohler, one must also bear in mind that Russia will respond to the US sanctions, which in turn will lead to political tension, the consequences of which aren’t yet foreseeable.

“Nord Stream 2 is an approved project by all legal means. Politicians verbally condemn the US actions, but a tough reaction towards the United States is now needed. Europe cannot afford to allow the United States to violate legal principles, only to pursue its own economic and political interests. Germany should impose sanctions against the US, otherwise, we will lose our independence”, Stephan Kohler emphasised.

According to him, the recent gas transit agreement between Russia and Ukraine, reached with the mediation of Germany and the EU, indicates a good development in interstate relations. This could be foreseen after the Normandy Format summit in Paris; and President Putin, during his large press conference at the end of this year, once again confirmed that there would be gas deliveries from Russia to Europe through Ukraine.

“We are on the right track in our relationships. Of course, America wants to stop it. There is no reason for these US sanctions at all, it is pure arbitrariness to disrupt the political rapprochement between Europe and Russia”, the expert explained.

According to Kohler, the launch of the new Power of Siberia gas pipeline from Russia to China caused fresh concern for the United States. Washington fears that an economic region could emerge in this part of the world that America would not be able to compete with.
“If Europe with its technologies and Russia with its raw materials become closer, together with the markets of China and the Eurasian Economic Community, they will represent a strong power. Cooperation from Vladivostok to Lisbon, if implemented, will threaten America’s economic dominance. The Americans definitely want to prevent that”, Stephan Kohler concluded.
SOURCESputnik News