China says it is to dispatch a guided-missile destroyer to the joint naval drills with Iran and Russia — which are to be held not only to hone the trio’s maritime security and anti-piracy prowess, but also to demonstrate their close alliance.

Defense Ministry spokesman Wu Qian announced the plan for sending the Xining vessel into the maneuvers at a monthly news briefing in Beijing on Thursday, AFP reported.

#China, #Russia, and #Iran will hold a joint maritime exercise from Friday to Monday in the Gulf of Oman, and the Chinese Navy will send guided-missile destroyer Xining to participate: Defense Ministry spokesperson Wu Qian 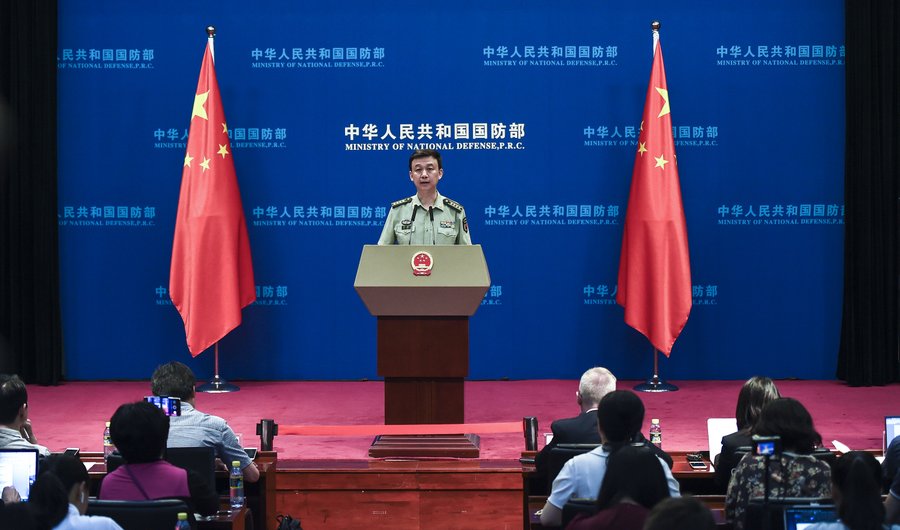 15 people are talking about this

The “Marine Security Belt,” as the event is codenamed, is to begin in the Indian Ocean and the Gulf of Oman on Friday and will last until Monday.

The exercises are meant to deepen cooperation between the countries’ navies, Wu added.

On Wednesday, Brigadier General Abolfazl Shekarchi, the spokesman for Iranian Armed Forces, said the event was meant to promote the security of international trade in the strategic regions, adding that sharing experience in maritime rescue operations was also to be pursued in the maneuvers.

Iran says its upcoming drills with Russia and China in the northern Indian Ocean and the Sea of Oman are aimed at safeguarding the security of international trade.

The Chinese official further called the maneuvers a “normal military exchange” between the three naval forces, which was in line with international law and practices. “It is not necessarily connected with the regional situation,” he added.

The event, however, breaks ground in being the first of its kind since the 1979 victory of Iran’s Islamic Revolution, marking the first such cooperation with the Islamic Republic’s post-Revolution naval front.

It also comes amid the United States’ ongoing efforts to woo its allies into a maritime coalition patrolling the Persian Gulf. Washington announced the coalition earlier in the year after blaming Iran for a series of attacks on passing tankers in the waterway, an allegation Tehran vehemently denies.

The coalition has, however, been joined by a handful of the US’s allies, including Saudi Arabia and Bahrain, and spurned by most of Washington-friendly European states, which have communicated their desire to avoid contributing to regional tensions.

The US-led coalition, which is headquartered in Bahrain, is part of a campaign that Washington launched under President Donald Trump in an attempt to mount “maximum pressure” on Tehran.

Last year, the United States left a multilateral nuclear deal with Iran, and returned its nuclear-related sanctions against the Islamic Republic as part of the trademark push.

Iran, however, has, on countless occasions, reminded the illegal and unilateral nature of the American drive, and insisted that regional security had to be provided by regional countries alone.

Back in September, President Hassan Rouhani unveiled a regional peace plan at the United Nations General Assembly and invited all countries that were affected by developments in the strategic region to join the initiative, dubbed Hormuz Peace Endeavor (HOPE).

The US drive has also been frowned upon by Moscow and Beijing, which have avowed to retain and deepen their alliance with Tehran in the face of Washington’s unilateralism.

A state-run Chinese newspaper said in August it was “wishful thinking” to expect that Beijing would join the US-led naval mission purportedly aimed at protecting shipping lanes in the Persian Gulf.

A state-run Chinese newspaper says it is “wishful thinking” to expect that Beijing will join a US-led naval mission purportedly aimed at protecting shipping lanes in the Persian Gulf.

The Global Times said that the US bid to form a coalition of escorting vessels through the Strait of Hormuz is actually part of Washington’s strategy “to comprehensively crack down” on Iran.

The Russian special presidential envoy for the Middle East and Africa also expressed unease and confusion over the US’s establishment of a maritime security coalition to patrol the Middle East region’s waterways.

“It is absolutely unclear to me what our American colleagues suggest,” Mikhail Bogdanov said in July.