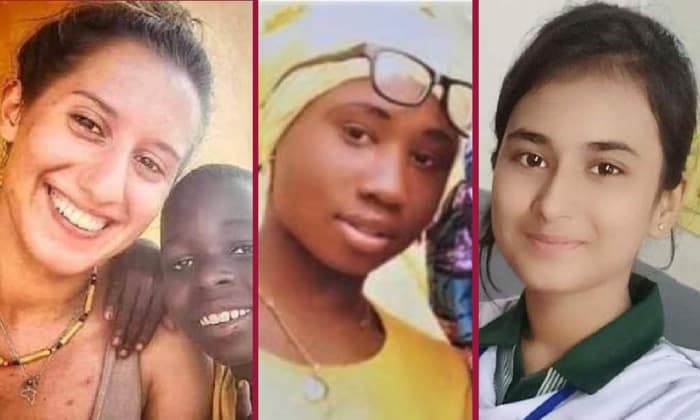 All three experienced a horror Christmas in the hands of their Islamic extremist kidnappers who would make them their “wives” in order to justify their sexual slavery before the Koran. No feminist has remembered them even on the feast of peace and joy: not only for those who believe in the celebration of the birth of the savior Jesus Christ but also for those who simply celebrate according to the Nordic “pagan” tradition of Santa Claus.

Tears, physical and sexual violence, piscological humiliations, far from the affection of their family members who also ignore their fate. It is easy to imagine how the young woman and the two teenagers spent the happiest day of the year …

The recurrence of the Advent of the Messiah is the bearer of the universal message of Faith, Hope and Charity, but above all of love for one’s neighbor and freedom of the human person, thanks to which Islamic culture has been able to proliferate also in the West obtaining public facilities to open mosques: something unimaginable in many Muslim countries where Christians are continually persecuted as reported in the latest various Gospa News reports.

A few days ago we wrote the terrible story of the Christian Huma Younas, the youngest of the three, kidnapped although little more than a girl by a Pakistani Sunni Muslim and forced to convert to Islam to have the legal right to marry her in a country where the brides girls are a dramatic reality just like the kidnappings of Christians.

We are on December 26, the day on which Christianity celebrates the first martyr Saint Stephen, one of the seven deacons chosen by the apostles to baptize the new acolytes.

It is an opportunity to also remember the other two girls who, for over a year, have not had certain information but only fragmented indications. Two young people with a clear and bright smile who are in all likelihood experiencing physical and mental torture perhaps even worse than an immediate martyrdom, at least for those who believe in eternal life.

Silvia Costanza Romano is the 20-year-old cooperator from Milan kidnapped on 20 November 2018 in the village of Chakama, Kenya, where she taught orphaned children to read and write with boundless love and infinite sweetness.

It is not known if or how much he was a believer but he lived with exemplary altruism of Christian imprint. According to Italian intelligence, it is now in the hands of fundamentalist terrorists Al Shabaab, the Somali rib of Al Qaeda.

While Leah Sharibu is the Nigerian kidnapped on 19 February 2018 in Dapchi, Nigeria, when she was only 16 years old, by the notorious Islamists of Boko Haram, close to ISIS. She was captured along with over 100 girls. But she is the only one who has not been released because she is Christian and did not want to give in to forced conversion, even if only “formal”, to Islam.

All three would be kept under arrest and used in all likelihood as wives-slaves as happened to Marwa Khedr, who became pregnant at 10 years old, and Nadia Murad Basee Taha, Nobel Peace Prize 2018, among the few young people known the story in the multitude of the 6500 Yazidis kidnapped in Iraq by the ferocious militiamen of the Islamic State, strong of the extremist interpretation of a Sura of the Koran.

Hatred towards the unfaithful enemy is inherent in the culture of radical Jihad supported by the text of the prophet as well as by Islamic fundamentalists. From this acrimony with the consequent right to retaliation, women are not saved because, according to Muhammad, Allah created them only for man’s happiness,

Disturbing the content of Sura IV of the Koran dedicated to An-Nisâ (The Women) which in verse 24 states: “You are forbidden among all women, those who are married, unless they are your slaves. This is what Allah prescribes you. Apart from that, you are allowed to search honestly and without abandoning yourself to libertinage”.

Here is the rule that implicitly establishes “female slavery” and by virtue of which extremist Muslims, the vast majority of Salafist or Wahabite Sunnis, feel legitimized to kidnap, rape and forcefully marry Christian, Yazid or simply non-Islamic “infidels” as it continues to happen in England where the National Crime Agency (the British FBI) ​​has had to alert a special unit for 1,500 rapes of underage girls by Islamic gangs.

The most terrible case of this wicked ferocity concerns the kidnapping, rape and slaughter of two Scandinavian tourists in Morocco last December, the 28 year old Norwegian Maren Ueland and the 24 year old Danish Lousia Jeperen, whose beheading was also filmed. Just to demonstrate the diabolical brutality we published the chilling video: one of the overwhelming evidence for the sentence of death sentence of the three arrested who claimed the gesture as an act of loyalty to ISIS.

SILVIA AMONG THE HANDS OF SOMALI JIHADISTS

At the moment, fortunately, the hopes of finding the Milanese Silvia Romano, now in the hands of the jihadists according to Italian intelligence and the Carabinieri del Ros of Rome who investigated the place together, remain alive, even if more slender every day to the Kenyan police.

Twenty-three pirates and jihadists belonging to the terrorist organization Al-Shaabab, according to Adnkronos, have been reached by personal and property preventive measures in Somalia in relation to the kidnapping.

This confirms, one year later, what Gospa News reported from the very first reportages while many Italian and Kenyan authorities continued to deny the implication of terrorists to avoid alarmism and repercussions on tourism…