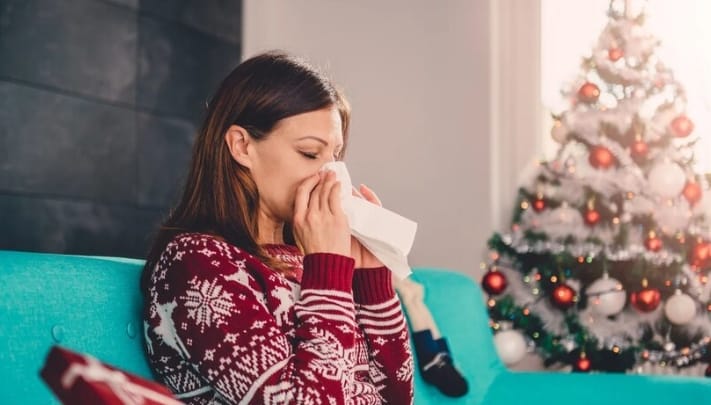 Health Editor’s Note: For those of us in the northern hemisphere, it is the time of the year when we are kept indoors, often in close proximity to others, and susceptible to viruses wafting through the air as people cough and sneeze around us. Also, a clear way for viruses to come near your mucous membranes in your nose and mouth, is to touch your face with fingers that have the virus on them.  Keeping your hands away from your face and washing your hands frequently will go a long way towards getting viral respiratory infections. If you actually count the times you touch your face during the day, and probably at night, you would be surprised at the high number. An undescribed term in the following article is photophobia, which means “light hurts your eyes.”

You are not going to be able to “cure” a viral infection but you can use medications such as ibuprofen or aspirin if you have an elevated temperature and to help alleviate some of the aches and pains that come with that. If you are drowsy, lay down and sleep if you can. If you have drainage or large amounts of mucous, typically going down the back of your throat and causing you to cough, keeping the air humidified around you and remaining in a semi-upright position will cut down on the body’s desire to cough incessantly. The coughing reflex is activated to keep you from “drowning.” Remember that your body is responding to the virus by trying to “wash” it away by creating all this extra mucous. Not very effective for making the virus leave, but very effective to make you feel worse. Get rest when you can.  You say, how can I rest at work.  My response to that is that you remain home during anytime you have an elevated temperature because all you will do is spread the virus to your co-workers. This process of infecting others becomes a thankless circle of illness for all. Drink tons of liquids. The virus will run its course and in the meantime do what you can to bolster your health. Hydrate, rest, and rest some more……Carol

Acute respiratory viral infections – the name of a whole complex of respiratory diseases, including influenza. They are caused by different viral agents, but are similar in terms of infection, symptoms and treatment. Is it possible to prevent the disease and how to alleviate the condition of the patient, if the infection could not be resisted?

What are the symptoms of SARS?

The viruses that cause SARS enter the human body through the nasopharynx and first cause inflammation in the nose, throat and nearby lymph nodes, and then provoke intoxication of the whole organism. As a response to the action of the virus, temperature may rise.

The diagnosis of ARVI is made by a doctor. When infected, the following symptoms are more common:

● pain in joints and muscles;

● pain and redness in the throat;

Nausea, vomiting, slight swelling of the lymph nodes, and discomfort in the ears are also possible. With flu, photophobia often occurs. If you experience these symptoms, you should consult a doctor.

How to prevent infection with SARS?

In the epidemiological season, almost all residents of large cities are susceptible to viral attacks due to contact with patients in crowded places. However, strong immunity enhances the body’s natural defense. What helps prevent ARVI?