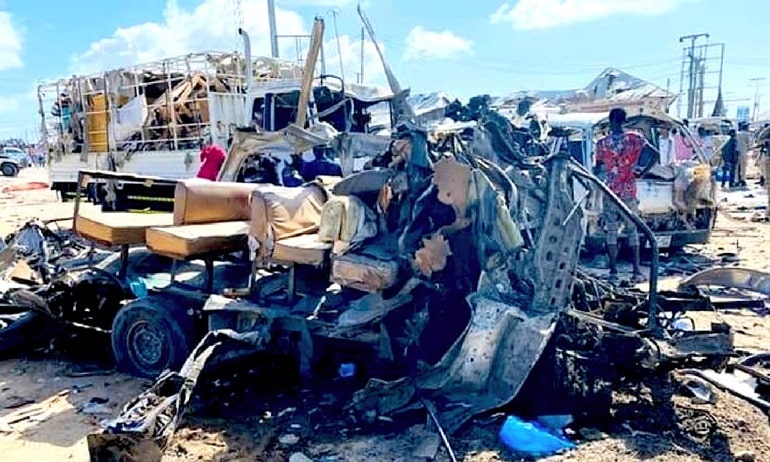 The media and international institutions do not have time to mourn the 11 Christian men victim of mass beheading in Nigeria than the demons of contemporary horror, the jihadists of various articulated factions created and financed by the West to foment theaters of war, they massacre in Somalia with more than 50 dead, even 90 according to rumors raised by a Somali parliamentarian.

The holiday week appeared the best period for ISIS terrorists, allied to the extremists of Boko Haram in Nigeria. On St. Stephen day, the first martyr of Christianity, the Islamic State media released the chilling video of a group beheading that would take place on Christmas day.

The conditional is a must because the Nigerian archbishop of Abuja, Monsignor Ignatius Ayau Kaigama, interviewed by Vatican News, speaks of news still to be specified and confirmed. But he stresses that “the group’s goal, he says, is still clear: foment a war between Christians and Muslims in the country”.

Islamic State militants in the West African province (Iswap) released a 56-second video showing the barbaric killing of 11 people in an unidentified location: they are Christians – say the terrorists – murdered in retaliation for the death of the leaders of the IS communicated by the USA.

The goal – say the terrorists – was to avenge the killing of some of their leaders in the Middle East, including Abu Bakr al-Baghdadi and his spokesman, Abul Hasan Al Muhajir.

The victims were allegedly captured during the past few weeks of raids in various northern Nigeria villages. The execution follows a previous video in which the hostages asked the Nigerian authorities and the Christian Association of Nigeria for help.

The terrorists had in fact tried to open negotiations with the government – according to local sources – but the attempt would have failed due to the refusal of the authorities to negotiate.

Last December 10 in northern Cameroon, instead, the Boko Haram militiamen, affiliated to Iswap, had carried out a carnage with kidnappings in the district of Mayo Sava through an ambush to a group of Christians gathered for a funeral.

According to humanitarian agencies, at least 30,000 civilians have been killed and 30 million displaced since the start of the jihadist offensive in 2009 in Nigeria.

While the terrible toll of the suicide bombing attack on Saturday morning at a security checkpoint along Afgoye Road on the outskirts of Modadishu, the capital of Somalia has yet to be determined.

The car bomb exploded with perfect synchronization on the arrival of a bus full of students from Benadir University, as told the mayor of the capital Omar Mohamud Mohamed to Radio Dalsan.

According to the BBC, there are at least 20 dead and 100 injured, including four Turkish engineers. While Russia makes an even greater estimate of 50 victims and RAI News updates the budget to 70.

But according to the Somali MP Mohamed Abdirizak quoted by the BBC there are at least 90, including 17 local policemen, 73 civilians, mostly students and the four foreigners. According to the reconstruction of the government spokesman, Ismael Mukhtar Omar, a suicide bomber behind the wheel of a car bomb went into action near a checkpoint along Afgoye Road on the outskirts of the city.

At the moment there have been no claims but the suspicions are all directed towards the jihadist militants of Al Shabaab, the Somali formation of Al Qaeda who is believed to hold the young Italian aid worker Silvia Costanza Romano, kidnapped in an orphanage in Kenya on November 20 2018.