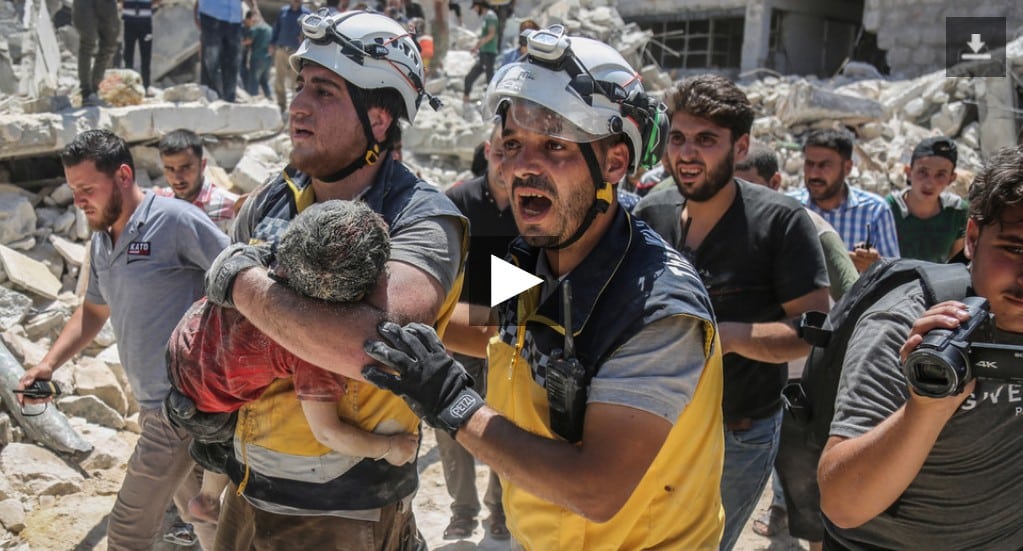 The US, UK and France launched missile strikes against Syria in April 2018, after ‘White Helmets’ and jihadist rebels accused the government of a chemical attack in the town of Douma. The Organisation for the Prohibition of Chemical Weapons eventually published a report saying its investigators may have found traces of chlorine, which was trumpeted as proof of the accusations in mainstream Western media.

Emails published by WikiLeaks on Friday, however, show that a senior OPCW official ordered to “remove all traces” of the engineering assessment questioning the report’s conclusions. Moreover, the observations by toxicologists who ruled out exposure to chlorine or any other chemical weapon could have caused the symptoms shown on White Helmets videos were likewise buried.

“It’s difficult to look at that email exchange without thinking at least there’s a whiff of a coverup,” security analyst Charles Shoebridge told RT, adding that the documents show the OPCW has been “subverted and led astray.”

While the experts seem to have done their job honorably and properly, it looks like the OPCW officials twisted and manipulated their work to fit the pre-ordained narrative, on behalf of the countries that carried out the strikes, and have been backing the militants in Syria against the government in Damascus.

Syria’s Bashar Assad’s use of chemical weapons against the men, women and children of his country makes him a war criminal.

The OPCW “right now looks awful,” Max Abrahms, a scholar at the Quincy Institute, told RT. “They have a lot of explaining to do.”

US officials seem to have pressured the OPCW to find the Syrian military responsible for the alleged chemical attack “regardless of what the actual scientists on the ground discovered,” according to Abrahms.

It is notable that the US, UK and France launched their missile strikes before the OPCW investigators even reached Douma. The final report, published in March 2019, provided an after-the-fact rationalization for the attack.

“This is a very conscious coverup at the very high level of the OPCW,” former UK intelligence officer Annie Machon told RT. It is unlikely that the OPCW will ever issue a follow-up in light of the new revelations, much less that any apology will be forthcoming from London, Paris and Washington.

The bigger problem, Machon points out, is that the OPCW suppressing evidence means that the chemical weapons watchdog is no longer credible. If they can’t be trusted about Douma, why should they be trusted about, say, the use of “novichok” in Salisbury just weeks before that incident?

London has accused Moscow of “highly likely” trying to assassinate former double agent Sergey Skripal and his daughter Yulia with the nerve agent, which Russia has denied. Meanwhile, the very same people who blamed the Syrian government for Douma – including the “open source intelligence” outfit Bellingcat – have promoted the official Skripal narrative as well.

For Shoebridge, the implications of the apparent cover-up go far beyond OPCW’s credibility, also raising the question of who might have been behind what amounts to a war crime in Douma.

“If a chemical attack did not kill all of those victims, mostly children, then what on earth did?” he told RT.

This question becomes especially relevant now, as the Syrian army is making a push against the last militant stronghold in Idlib. Meanwhile, US President Donald Trump is warning Damascus to back off and accusing Syria, Russia and Iran of being “on their way to killing thousands of innocent civilians.”

Email from the Chief of Cabinet at the OPCW, demanding deletion of dissenting engineering assessment: “Please get this document out of DRA [Documents Registry Archive]… And please
remove all traces, if any, of its delivery/storage/whatever in DRA”https://wikileaks.org/opcw-douma/#OPCW-DOUMA%20-%20Release%20Part%204 …

Trump is making his decisions “based on what is a pack of lies,” former US diplomat Jim Jatras tells RT. These outrageous claims come from Al-Qaeda terrorists that control Idlib, and their public relations arm, the ‘White Helmets,’ but are taken at face value by the Western mainstream media.

“Any rational person would want the Syrian army and the Russian air force go clear out Al-Qaeda from this area,” said Jatras.