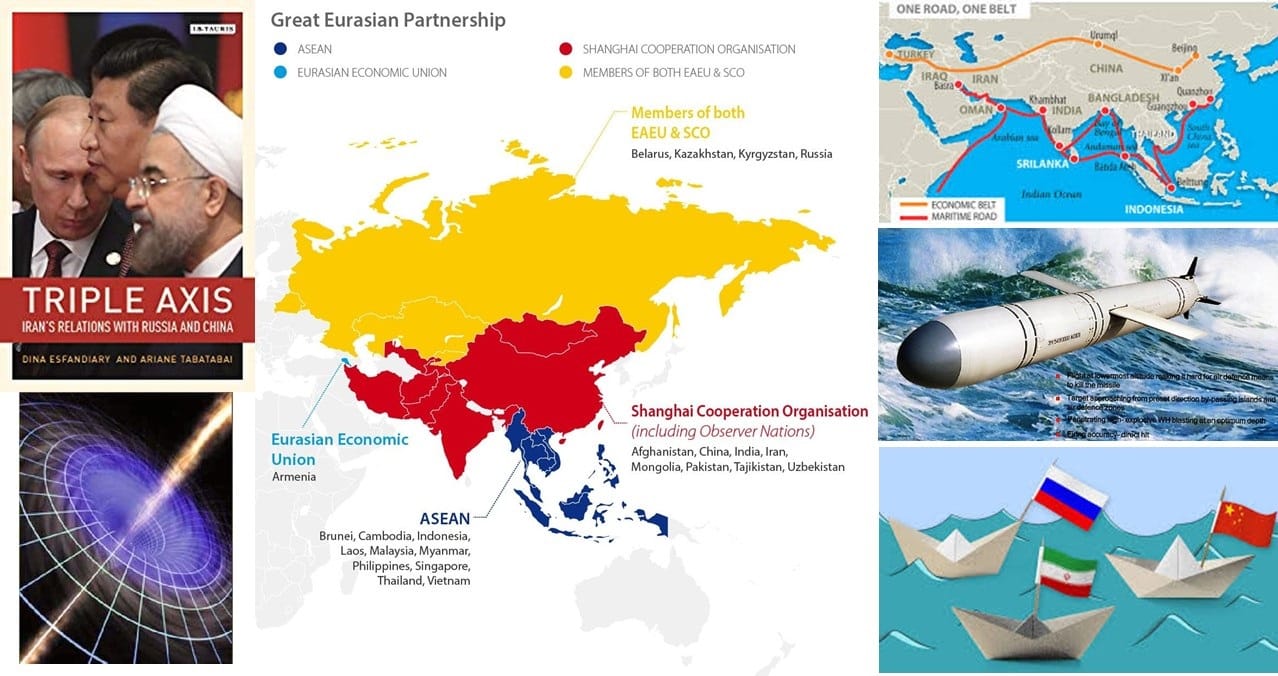 This headline came to my attention today:

Russia informs Iran of its views about FATF

While it deals with measures against money-laundering, it is part of the new alternative financial system in which China and Russia and Iran are easily creating a post-Western economic and financial system. Iran is now a peer to India as  a major player going into 2020 and this matters because India appears to have been taken over at the highest levels by the Zionists.

But let’s connect four other dots, three visible to the attentive public, one not.

Dot 1: Joint naval exercises. While these are largely for show — the US Navy will be sunk by supersonic missiles at the same time that Russian S-500 as well as S-400 defensive shields convert US attack aircraft into chaff — but make the increasingly obvious point, in the aftermath of the USS Donald Cook — that the US Navy is no longer effective as a blunt instrument.

Dot 2: Rand Paul meets Supreme Leader. I have no direct access but I am seeing a clear connection between the visit by Rand Paul to Iran on behalf of President Donald Trump and outside the Zionist-controlled Department of State nominally led by Christian Zionist Mike Pompeo who still consorts with the CIA “leaders” that are trying to unseat our President with falsehoods while slow-rolling requests for all of John Brennan’s green phone calls to and from the UK; the Supreme Leader’s quite extraordinary statement making it clear that the restoration of Palestine to the Palestinians (the end of the invented state of Israel) in no way diminishes the rights and opportunities of Jews resident in Palestine; and the combination of Miriam Adelson receiving the Medal of Freeedom, throwing war criminal Benjamin Netanyahu under the bus, AND the growing anti-Zionist clamor among Jews including Bernie Sanders. Zionism is anti-thetical to Judaism, if Judaism does not want to become evictable again, it must separate itself from Zionism and agree to the end of Israel.

Dot 3: Iran is a cyber super-power. In combination with what China and Russia can do against US geospatial and communications satellites  as well as all military mobility and weapons systems that are in the Stone Age when it comes to electromagnetic neutralization, the message is clear: first, that we cannot attack Iran with the blustering impunity favored by the Zionist camp followers known as neo-cons; and second, as I and others warned from 1990 (Winn Schwartau, “Electronic Pearl Harbor” and onwards (1994, Sounding the Alarm), any US attack on Iran is going to see US financial, power, and communications systems go down. The East Coast runs out of food within two weeks of any catastrophic attack on our Just in Time food supply chain.

Dot 4: Israel is a Russian criminal state with scalar time-enegy weapons.  It is only recently, as I put together my latest book, REINVENTING INTELLIGENCE: 30 Years in the Wilderness, that I have realized that CIA has fought me on an Open Source Agency (OSA) for so long because they understood they could not keep me from doing full disclosure of everything using ethical legal open sources. As I testified to Senator Daniel Patrick Moynihan and his Secrecy Commission, secrecy is used to protect power and budgets in the USA, not sources and methods. The media and academia are completely controlled by the Deep State and the Shadow Government, such that information that is in the open but not publicized becomes “virtually” secret.  Thomas Bearden’s books, especially Fer de Lance (on scalar weapons with infinite remote time-energy manipulation capabilities), Excalibur Briefing (mind matter interaction and directed energy weaponry including hand-held devices that can cause fatal cancers and fatal heart attacks from across the street), Gravitobiology (Soviet energetics and bioloigical effects including cytopathogenic effects); and his multiple books on free energy including Energy from the Vacuum and Free Energy Generation all matter greatly — and have been repressed with willful malevolence for decades.

There are two points  to be drawn from this new understanding. The first is that — never mind what we are told about the joint space force that has been in some sort of off-planet being since the 1950’s, the Russians have advanced in the 4th dimension — they are now in 10th generation precision action at a distance with energetics. Putin has been remarkably patient with the Gold War assault on the Russian economy (Krongard, Brennan, Browder). We have our own capabilities, including mirroring and counterstrikes (Chernobyl may have been such) but my gut feeling is that we are so far behind on the math that we will not catch up — we play the conventional bully at our peril.

The second point I have begun to see is that the power of Israel in the USA is not based only on bribery and blackmail and the alleged Samson Option documented by Sy Hersh (nuclear bombs planted in key US cities) but also on a cyber and scalar weaponry alliance between the Russian criminals controlling the Zionist state, and the neo-conservatives dominating US national security policy. Russia is used as the bogey-man (“main enemy”) to drive the funding of the military-industrial complex that is both 50% waste and heavily engaged in extraterrestrial and deep underground operations never approved by Congress and anti-thetical to the public interest. “The enemy of my enemy is my friend.” Israel is a “three-fer”:  owned and operated by Russian criminals who hate Russia and Putin; home base for US mostly Russian-origin criminals making up the Jewish mob also known as the Red Mafiya; and cyber-scalar state/non-state actor that together with MI-6 and GCHQ in the UK and CIA and NSA in the US, that is able to access and control anything it wishes including financial transactions. It is now clear to me that elements of the secret intelligence and counterintelligence world — witness the Jeffrey Epstein pedophilia entrapment and nuclear smuggling operation — are in league with one another against their own governments and their own publics.

And that brings me to my final point: the Russian-Iranian-Chinese alliance is not just targeting UK-US organized white collar crime (City of London, Wall Street), it is also targeting US-UK-Israel organized black collar crime (Red Mafiya), both as a preamble to taking down secret intelligence services that are undermining their own governments.

President Donald Trump was groomed by Roy Cohn; President Donald Trump is also known as a man of his word among the mob that controls construction cement and street cash, according to NYPD retired detective Jimmy Rothstein. William Barr was groomed by Bill Casey and was Bill Clinton’s handler when CIA turned Arkansas into a criminal gulag. So the question on everyone’s mind is this:

Is Donald Trump a follow-on Manchurian Candidate, the logical counterpoint to Barack Obama? Or is Donald Trump, with the help of individuals such as William Barr and Robert Mueller who have “made the deal,” going to take down the Deep State and work with others including the Supreme Leader, General Secretary Xi Jinping, and President Vladimir Putin to create a prosperous world at peace?

I have two bets down on Donald Trump — that he will win in 2020; and that he will set the stage for the end of Israel, the end of the Red Mafiya, and the restoration of integrity to the US Government with #UNRIG (election reform) and the Open Source Agency (the truth about everything) by a new transpartisan team in 2024, one that is, as Thomas Jefferson so wisely articulated, backed by 100% of the eligible voters as well as the power of information — public intelligence — about all threats, all policies, all costs.

Donald Trump may not finish the job but he has made it possible for others to do so.

May God Bless Donald Trump now and into the future; and may God Bless America as it goes beyond Donald Trump, beyond Bernie Sanders and Michael Bloomberg, into a restored 2nd American Republic, Of, By, and For We the People. How we deal with Zionist Israel — and the Red Mafiya — is central to the  future of humanity at home and abroad. How we do full disclosure about free energy, anti-gravity, scalar time-energy warfare,, and more, matters.

Time is the one strategic variable that cannot be bought nor replaced (Colin Gray). I believe that President Trump cannot wait for re-election to attend to these vital matters: #UNRIG, OSA, Red Mafiya/Zionist Israel. They are the tri-fecta of liberty and precursors to creating a prosperous world at peace.