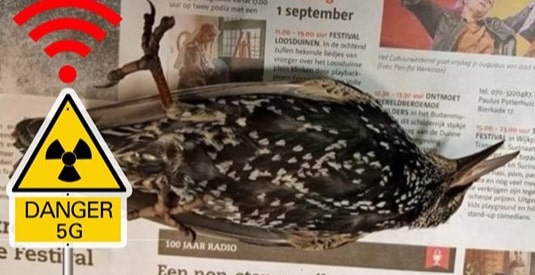 Killing birds by 5G and HAARP!

Written and submitted by Enkidu Gilgamesh

All living creatures have to emit and absorb electromagnetic waves of a specific spectrum. But there are limits for the energy intensity.

Too little results in deficiency, starvation, disease and death.

Too much leads too injuries and sudden death.

Energy is a source of life, but can be turned into a weapon of targeted mass killing.

The use of the spectrum of energy has a similarity with the sonar waves, which various whales use for communication or paralyzing and killing of their prey.

Very intensive military sonar causes death and damage of these mammals by destroying the specific tissue of their biological sonar system.

Parallel to the mass stranding and death of sea mammals, we can observe mass death of birds and bats by …

We are all informed about that. It is not a secret, but the whole gigantic complex of communications and climate engineering industries propagate their deadly implementations as measures for “protection of the climate and the biodiversity“.

How psychopathic must these people be to sell their mass killing as “protection” of anything?

How dumbified must their victims be, buying these distracting lies?

5G demonstrates its power by mass killing of birds, but why is the health and environment impact of 5G is not researched?

Is 5G a tool of human made evolution, which is used to decide who is “fit to survive”?

From the perspective of the Geoengineering gang the answer is very simple, all living creatures have to “adapt to climate change” by 5G or die.

If “some birds” fall dead from the skies, than they are “not fit enough” for the climate controlled environment.

Like many mammals learned to live in the ocean, when the continent Antarctica become cold, now all living creatures have to adapt to Geoengineering as fast as possible. Some generations may suffer heavily but some will survive! All have the same chance! No one is excluded from this competition!

‘Telecom Industry Did No Research on Health Impacts of 5G’
By Prof. Paul Heroux and Akshit Sangomla,
Global Research, April 05, 2019, Down To Earth 27 March 2019
https://www.globalresearch.ca/telecom-industry-did-no-research-health-impacts-5g/5673706

“Paul Heroux: All artificial electromagnetic radiation is a problem because biological systems are not adapted to it.“

RADIATION FROM CELLPHONES, WI-FI IS HURTING THE BIRDS AND THE BEES; 5G MAY MAKE IT WORSE
BY DANA DOVEY ON 5/19/18 AT 9:00 AM EDT
https://www.newsweek.com/migratory-birds-bee-navigation-5g-technology-electromagnetic-radiation-934830

“Technology is quite literally destroying nature, with a new report further confirming that electromagnetic radiation from power lines and cell towers can disorientate birds and insects and destroy plant health. The paper warns that as nations switch to 5G this threat could increase.“

“In the new analysis, EKLIPSE, an EU-funded review body dedicated to policy that may impact biodiversity and the ecosystem, looked over 97 studies on how electromagnetic radiation may affect the environment. It concluded this radiation could indeed pose a potential risk to bird and insect orientation and plant health, The Telegraph reported.“

“This is not a new finding, as studies dating back for years have come to the same conclusion. In fact, one study from 2010 even suggested that this electromagnetic radiation may be playing a role in the decline of certain animal and insect populations. The radio waves can disrupt the magnetic “compass” that many migrating birds and insects use. The creatures may become disorientated, AFP reported.“

“Magnetic compass orientation in night-migratory songbirds is embedded in the visual system and seems to be based on a light-dependent radical pair mechanism. Recent findings suggest that both broadband electromagnetic fields ranging from ~2 kHz to ~9 MHz and narrow-band fields at the so-called Larmor frequency for a free electron in the Earth’s magnetic field can disrupt this mechanism.“

Geoengineering is the ultimate tool of exploration and processing of the main global resources and energy and water, but it is also the ultimate weapon of mass destruction.

Intelligence is the causal connection of evidence by complete knowledge. Therefore we need to collect all openly available evidence about Geoengineering on the layers of our planet Earth and connect this with fundamental knowledge of physics, meteorology, chemistry, biology and engineering. What we also need to learn is psychology and methods of fraud.

Geoengineering is applied in the …

It is not a coincidence, that with the breakdown of the statehood of Somalia under the pretext of a fake revolution, also bird killing radiation came to attention.

The same mass bird death can be observed under the first implementations of 5G!

Please read the following article. I will quote some paragraphs and the embedded youtube video here.

5G Will Use the Same Frequencies as Pain-Inflicting Military Weapon
The Millennium Report  December 31, 2018
http://themillenniumreport.com/2018/12/5g-will-use-the-same-frequencies-as-pain-inflicting-military-weapon/

“What does the 5G network and a non-lethal weapon developed by the military have in common? The Department of Defense has developed a non-lethal crowd control device called the Active Denial System (ADS). The ADS works by firing a high-powered beam of 95 GHz waves at a target—that is, millimeter wavelengths. Anyone caught in the beam will feel like their skin is burning. The burning sensation stops once the target leaves the beam. This weapon operates on 95GHz waves and 5G will operate on the same frequencies.“

“Today’s cellular and Wi-Fi networks rely on microwaves – a type of electromagnetic radiation utilizing frequencies up to 6 gigahertz (GHz) in order to wirelessly transmit voice or data. However, 5G applications will require unlocking of new spectrum bands in higher frequency ranges above 6 GHz to 100 GHz and beyond, …“

“See the video below for the 5G frequency weapon in action:“

5G will be the platform for tomorrow’s smart cities
https://www.ericsson.com/en/patents/5g-will-be-the-platform-for-tomorrows-smart-cities

“This trend is compounded by the effects of climate change: Even as urban populations swell, cities must find ways to reduce resource consumption and mitigate carbon emissions. At the same time, changing rain patterns are redefining urban stormwater management. In New York City this summer, torrential downpours have frequently overwhelmed drains, roads and transit systems. Conversely, cities in Sweden are experiencing one of the driest seasons in decades. As precipitation seems to continue to come down in shorter, more concentrated bursts, droughts and flooding are becoming increasing concerns. Real-time telemetry is arguably the most powerful tool a city has to respond to these challenges, but a scalable sensor network demands a stronger, more reliable platform for cellular connectivity. That’s where 5G comes in.“

“IoT sensors will monitor everything from air quality, to energy use, to traffic patterns. This technology will enable everything from smart parking, to crowd management, to emergency response. Since many of these devices will be embedded in difficult to reach, often dangerous locations, wireless connectivity will be key in enabling flexible design and on-the-fly reconfiguration.“

““With the emerging 5G network and the internet of things, it is possible to deploy technology in ways that protect the environment and promote long-term sustainability.”“

On this blog you will find other articles which touch the same topic from other perspectives. Some have been linked within the above text. A few will be listed here:

How hurricanes are made with high frequency radiation!
http://geoarchitektur.blogspot.de/2014/11/climate-engineering-without-chemtrails.html

5G – FROM BLANKETS TO BULLETS
by Arthur Firstenberg
http://www.cellphonetaskforce.org/5g-from-blankets-to-bullets/

“The single most important fact about 5G that nobody is talking about is called “phased array.” It will totally change the way cell towers and cell phones are constructed and will transform the blanket of radiation which has enveloped our world for two decades into a million powerful beams whizzing by us at all times.“

“Low intensity microwave EMFs have been proposed to produce neuropsychiatric effects, sometimes called microwave syndrome, and the focus of this review is whether these are indeed well documented and consistent with the known mechanism(s) of action of such EMFs. VGCCs occur in very high densities throughout the nervous system and have near universal roles in release of neurotransmitters and neuroendocrine hormones. Soviet and Western literature shows that much of the impact of non-thermal microwave exposures in experimental animals occurs in the brain and peripheral nervous system, such that nervous system histology and function show diverse and substantial changes.“

Thanks to my friend @Mi for brainstorming. She inspired, required it and also supplied external resources.