The attack Trump claims to be retaliating against was against an Iraqi base, not an American base, an attack by ISIS where an American oil worker was killed on an Exxon oil facility…where oil has been stolen from Iraq for years.

By the term “contractor,” the US is careful not to identify who he actually worked for and there is absolutely no reason for any Americans to be in Kirkuk.  Iraq seized the K1 base which was taken from ISIS and their Kurdish allies in 2017.  The Kurds have, since that time, threaten the base and were most likely complicit in staging the recent attack.  From the BBC: 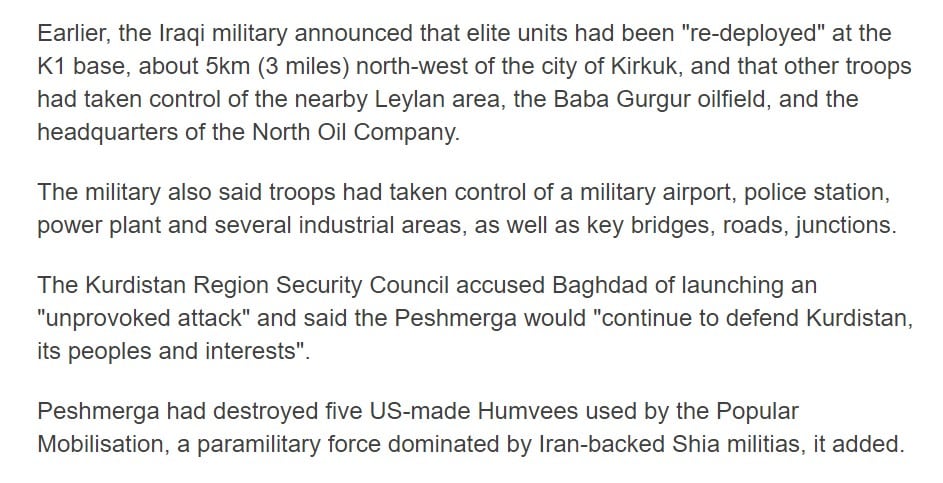 Here, the BBC admits that the K1 base housed PMU militias who were there to protect K1 from the Kurds…and ISIS.

It is also more than possible that, if ISIS and Kurdish forces attacked K1, they were aided by Israeli commandos who are now training Kurdish troops and who have largely replaced the US as the force backing the Erbil government.

“Israel has been providing aid to the Kurds in northern Syria since the US withdrawal from the area, a senior Israeli politician said Wednesday, warning that their defeat would allow Iran to further entrench itself in the area.

‘Israel has received many requests for assistance, mainly in the diplomatic and humanitarian realm,’ Deputy Foreign Minister Tzipi Hatovely told the Knesset Wednesday in remarks reported by the Reuters news agency. ‘We identify with the deep distress of the Kurds, and we are assisting them through a range of channels.'”

The KI base, held by the Iraqi military and representative groups of both Sunni and Shia militias, is tasked with keeping Kurd in check.  However, the Israeli website, Debka Files, has published articles and maps carefully citing the US domination of Kirkuk through K1, something sources on the ground find quite astounding.

“We haven’t seen an American in months.”

When ISIS hit Iraq in early 2014, the Kurds joined with ISIS against Baghdad and seized oil fields around Kirkuk and began shipping oil into Turkey, not by truck but by pipeline.

To provide cover, Turkey claimed the pipeline had been destroyed in an explosion but in reality, Turkey, working with Azerbaijan, used “pigs” that identified the stolen oil as Azerbaijani while the money went to Erdogan family members, Kurdish leaders and ISIS with key American political leaders, neocons, getting a cut of the action.

The base which was attacked housed not just Iraqi regulars but PMU units, who were also attacked, the same units Trump says staged the attack….on themselves.

Macgregor says Trump was misinformed, we say it is worse, so much worse.  This is the US retaliating against Iraq for an ISIS attack where an American oil worker was killed.

The attack was using a Romanian built 122mm rocket, one supplied to ISIS by the US.  All nations use similar launchers but most are supplied through Turkey and Ukraine by US allied fake NGO’s to terrorist groups in both Syria and Iraq.

Iran builds its own missiles, and doesn’t buy them from Romania.  The US, however, does.