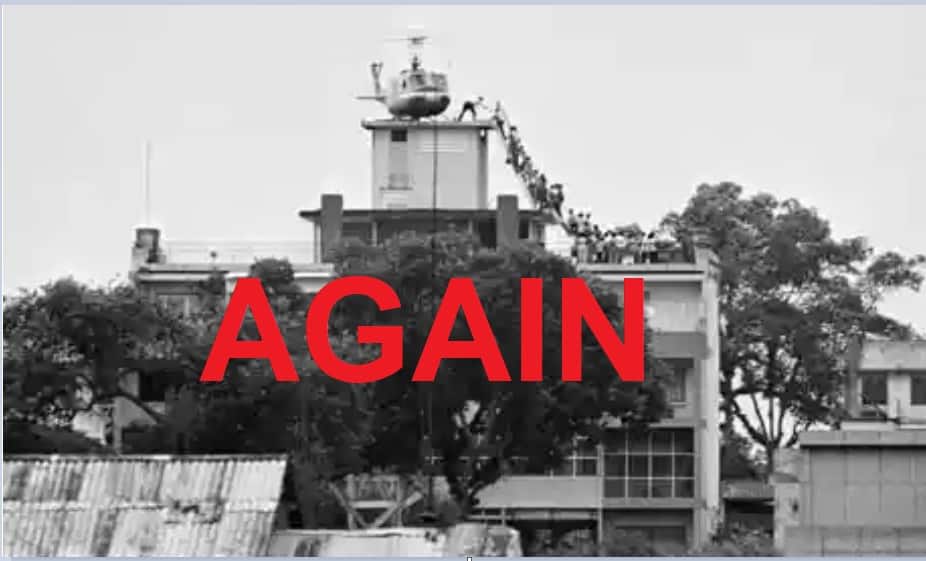 Iraqi protesters set ablaze a sentry box in front of the US Embassy building in the capital Baghdad to protest against the weekend’s air strikes by US planes on several bases belonging to Hashd al-Sha’abi, December 31, 2019. (Photo by AFP)

The United States’ Embassy in Baghdad has been evacuated after thousands of angry Iraqi demonstrators gathered outside the gates of the compound to condemn Washington’s fatal military aggression that targeted Iraq’s Popular Mobilization Units (PMU).

Also on Tuesday, Iraqis held a massive funeral procession in the capital Baghdad for the victims of the US air raids, which killed at least 31 PMU fighters from the Kata’ib Hezbollah faction and injured dozens of others in near the Syrian border in Anbar Province.

Thousands of angry protests managed to reach the US diplomatic mission which is located in Baghdad’s heavily fortified Green Zone, chanting ‘Death to America’ and burning US flags.

The protesters further held up signs calling for the US mission to be shut down and for the parliament to order US forces to leave Iraq.

“Parliament should oust US troops, or else we will,” one poster read.

The drone strikes killed at least 27 individuals and wounded 51 others.

Reuters cited two Iraqi Foreign Ministry sources as saying that the US ambassador and other staff were evacuated from the embassy out of security concerns as protests raged outside.

Only a few embassy protection staff were left behind, according to the Reuters.

American forces deployed inside the compound have fired tear gas, flash bangs and stun grenades to disperse the crowd.

The protesters have breached the outer wall of the high-security compound. They have sprayed the words “Closed in the name of the people” on the gates of the American mission, throwing bricks and stones at the surveillance cameras around the building.

Outside the mission, Iraqi security forces fired teargas and stun grenades as they tried to prevent the protesters from making their way into the diplomatic compound. At least 12 people were wounded in the clashes.

Only a small amount of teargas was used and the PMU members taking part in the rallies, using loud speakers, urged the crowd to disperse, a Reuters witness said.

The Iraqi caretaker premier called on the protesters to “immediately” leave the compound.

“We recall that any aggression or harassment of foreign embassies will be firmly prohibited by the security forces,” Abdel Mahdi’s office said.

The protester remained defiant, with a group of them storming and burning a security post at the entrance of the embassy.

US Defense Secretary Mark Esper said on Tuesday that the United States was sending additional forces to its embassy in Baghdad, and called on the Iraqi government to help protect American personnel.

“We have taken appropriate force protection actions to ensure the safety of American citizens, military personnel and diplomats in country, and to ensure our right of self-defense,” Esper said in a statement.

Earlier, US Secretary of State Mike Pompeo held phone conversations with the caretaker premier and President Barham Salih, warning that Washington will “defend its people,” according to a State Department statement.

The two Iraqi leaders also assured Pompeo “that they took seriously their responsibility for and would guarantee the safety and security of US personnel and property.”

‘US unwanted in Iraq’

Hashd al-Shabi commander Faleh al-Fayyadh and Kata’ib Hezbollah commander Abu Mahdi al-Mohandes along with other senior Hashd leaders were among the protesters.

Speaking to Reuters, Qais al-Khazali, the head of Asaib Ahl al-Haq — another PMU faction — said “Americans are unwanted in Iraq. They are a source of evil and we want them to leave.”

Many protesters have set up tents, announcing plans for an indefinite sit-in until the embassy is closed and the ambassador expelled from the country.

Earlier in the day, Iraqi lawmakers chanted anti-US slogans during a parliamentary session.

Reacting to the developments in Iraq, US President Donald Trump said in a tweet that Iran was to blame and would be held “fully responsible.”

Iran killed an American contractor, wounding many. We strongly responded, and always will. Now Iran is orchestrating an attack on the U.S. Embassy in Iraq. They will be held fully responsible. In addition, we expect Iraq to use its forces to protect the Embassy, and so notified!

45K people are talking about this

“Iran killed an American contractor, wounding many,” Trump tweeted. “We strongly responded, and always will. Now Iran is orchestrating an attack on the US Embassy in Iraq.”

Those casualties came in what the US described as a rocket attack targeting a military base located near the Iraqi city of Kirkuk on Friday.

Washington pointed the finger at Iran for that attack, an allegation vehemently rejected by Tehran.

In response to the incident, the US military launched the deadly air raids on Iraq’s PMU, which Washington and its allies claim is an ally of the Islamic Republic.