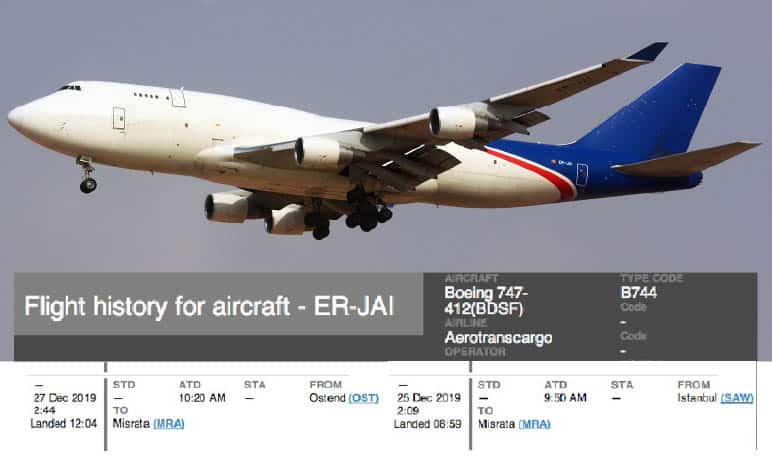 «Silk Way, as we have seen, but also other arms delivery companies, had made Ostend its European base in the 2000s. Since then, we have thought that with the end of the Viktor Bout era, imprisoned on March 6, 2008 in Bangkok and imprisoned for 25 years since 2012 in the United States, the airport that had been the hub for centuries of illicit arms trade had ended with this traffic. No: in front of the frightened eyes of the inhabitants, a huge 747 landed several times at the airport, leaving loads of weapons and ammunition to fuel yet another ongoing conflict, this time in Libya, delivering weapons galore, without a check top , it seems good, to the point of seeing them fall quickly and a little too easily into the hands of the people of the Islamic State».

Thus began a courageous and meticulous investigation published last February on CentPapiers which describes the Belgian landing strip as the crossroads of arms trafficking between Europe and the Middle East. The reason is above all logistical: Ostend airport, in Flanders, overlooks the North Sea where giant cargo ships carrying missiles, submachine guns, rifles, and ammunition from all over the world can easily dock.

And the Belgian runway ends today at the center of our investigation into the numerous suspected take-offs of a Boeing cargo 747-412 with flight plans to and from Libya on the days when Turkey sent the jihadist mercenaries to the country, battered by a civil war since 2014 which has escalated in 2019. Turkish President Recep Tayyip Erdogan has in fact decided to stand in favor of the Government of National Agreement (GNA) of President Fayez al-Sarraj, recognized by the international community, by the Union European and from Italy

It is the same type of plane that has hit the eye of the hurricane in the media in recent days following the threats of shooting down by the troops of the Libyan National Army (ENL), the army of General Haftar, which controls Cyrenaica and last April it is attempting to conquer Tripoli and Tripolitania, also thanks to the support of Russia which would have sent its notorious Wagner contractors to the country.

«The forces of the Libyan National Army, headed by General Khalifa Haftar, have denounced the flight of a Boeing 747-412 from Istanbul to Libya, carrying a load of military equipment. The spokesman for the Libyan National Army, Ahmad al-Mismari, announced that he warned against the use of civilian planes to transport weapons: “The army will strike and shoot down any plane” that carries weapons. “Civil status,” added Mismari quoted by Reuters, “is revoked when these planes are used for military purposes”» reported the Agi (Italian Journalism Agency) on 22 December 2019.

This is confirmed by the flight plans of the Aerotranscargo (ATC), a commercial charter airline based in Cisinau, Moldova, and operating office in Sharjah in the United Arab Emirates (UAE).

Before going on, it is not idle to remember that the nation of Abu Dhabi ended up at the center of the controversy over the bombs of the German Rheinmetall, produced in the Italian factory of Domusnovas, in southern Sardinia, exported to the Emirates disassembled and assembled and resold there to Saudi Arabia to be used in the Yemen war by circumventing the international arms embargo.

The same type of embargo has also been imposed in Libya but, as reported by the media and by Haftar himself, obviously as regards only rivals, it would have been systematically violated.

«The latest Amnesty International report indicates likely war crimes committed by both sides, the Serraj National Agreement Government and the Libyan national army of Khalifa Haftar – wrote the newspaper Repubblica last October 30, 2019 – The war in Libya it is not “just” a civil conflict: foreign powers are arming the two factions, even with the latest generation of drones. In Libya, the arms embargo imposed by the United Nations is constantly violated. With those same weapons it is probable that the conflicting forces are committing “war crimes”: bombing raids on residential areas, drones used to hit civilian targets (including hospitals), increasingly numerous victims among the population».


This is why the cargo flights reported by our anonymous source “Stavro apostolo”, probably of Greek nationality but with unidentifiable email, become more suspicious.

The report relates to the recent “Flight History” of one of the aircraft of the Aerotransacargo and can be easily viewed by anyone on the “Flightradar24” website by entering the code name of the ER-JAI aircraft, a Boeing 747-412 (BDSF), type code B744 and mode S 504E36.

On Christmas Eve, the cargo ship departed from Sharjah (SHJ) airport, in the United Arab Emirates, where the ATC airline has its offices in the direction of Istanbul where it landed at 4 on December 24. He made an “unknown” journey and then on the 25th he left Istanbul for Misrata where he landed at 10.59 in the morning. From there it left in the afternoon to land in Ostend at 3.47 PM.

Two days later, having made the mysterious load, he left the Belgian airport and landed in Misrata at 2.04 PM two hours later he left to return to Ostend at 7.53 PM. On December 28 there was the last flight from Belgium to Misrata where he landed at 1.53 PM, from there he went to Dhaka, Bangladesh. Subsequent flights are archived with “unavailable” departure and arrival places and “unknown” landing time. As if a veil of secrecy had fallen on the Boeing 747-412 …

What did that large cargo carry from Ostend to Misrata after General Haftar reported the suspected commercial flight from Istanbul to Libya threatening to shoot down other civilian planes from Turkey because they were accused of carrying weapons? If he really loaded weapons, he would have done so in clear violation of the UN embargo.

PLANE OF THE SAME COMPANY IN THE SIGHT FOR ARMS

It is not the first time that a Moldovan airline aircraft has come to the center of international attention for suspicious transport. This is always supported by the article by CentPapiers which in turn quotes a report from April 15, 2015 by Radio-Télévision Belge Francophone (RTBF).

«Libyan sources who testify to trafficking belong to the government field recognized by the international community. According to them, the weapons are intended for the coalition of Islamists who are against the government. The Boeing 747 that left Ostend for Libya last week was said to have transported various types of ammunition and light antiaircraft artillery. The same sources, on the other hand, are unable to specify the origin of the weapons taken on board, but underline the fact that Ostend’s planes land outside Libya, even regularly in the United Arab Emirates, a country whose recently it has been shown to be the starting point for weapons destined for Libyan territory»reported RTBF quoted by CentPapiers.

«The United Nations has also raised suspicions about Ostend. Inspectors found “suspicious items” on the load notes late last year. They asked for an explanation from the Belgian authorities, who replied that they had inspected a plane for Libya, in which no prohibited product had been found» added Belgian TV.

«The aircraft would have been the 747-409 BDSF of 1992, the Aerotrans ER-BAM (24312 LN: 954) which currently operates in Misrata. Below is the filling sheet dated 6 August 2015: the plane is therefore full of boxes of ammunition of 7.62 mm mm and the document contains 6 pages !!! The sheet indicates “RUH” as the loading place, that is Riyadh airport … and as unloading place … Ankara in Turkey (ESB, for “Ankara Esenboğa Havalimani”, that is the Turkish international airport of Esenboğ) »Says CentPapiers.

«After a month of absence, our truck and parakeet transporter landed in Libya, the Moldovan B747 ER-BAM (headquarters Sharjah-United Arab Emirates). Remarkable, because today the plane (after the EU TCO accreditation?) Operates mainly from Hahn airport, although with some new destinations (including Iraq) – it is read in the report on suspicious cargo – It is nice to know that our Moldovan friends (actually comes from the country) have apparently transported around 250 tons of ammunition for the benefit of some rebels in Syria … All this on behalf of our good friends from Saudi Arabia where Belgium also likes to sell weapons. Sad to determine, after 25 years, that little has changed».

Reference is made to the scandal of Russian arms dealer Viktor Bout, mentioned at the beginning, and a photograph taken by Mohammad Attaleb at Misrata is published on the same Boeing plane.

Today, therefore, only the cargo model would have changed with the new 7474-412 ER JAI as the flights of this commercial charter began in Instabul and then continued to the Libyan airport in the following days, also with another cargo owned by a Pentagon’s partner Us charter airlines….