[ Editor’s Note:  The wait is over, and I suspect with an end of the year planned released date on the news and the publicity of a system that Russia has been working on for a long time.

It has required advances in a number of technologies; metallurgy, new fuels, multiple-warhead deployments, and cyber warfare protections.

We have heard about how hard these flyable warheads would be to intercept in the traditional manner, especially a six-pack of them, which leaves a defender trying to find some way to fry their electronic glide controls.

If something for that already exists, I doubt we would hear a peep about it. Such countermeasures are saved for surprise day. That said, they do have to be tested outside of computer simulation and that is what counterintelligence people look for, as adversary testing data is golden if you can get it.

So here we are at the end of 2019, back to square one with mutually assured destruction, which as bad as it sounds, actually protected us during the cold war. Can we get a replay of that? No one knows for sure. That is why major countries would have multiple systems in case one or more can be defeated. 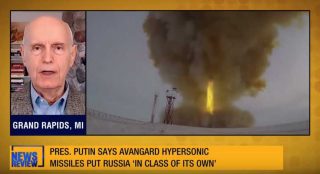 Russia did what it had to do for a large country with a huge border to protect from penetration. These new missiles are in the Urals, far inside the country to have more time to prepare to shoot back during a first-strike attack.

Moscow needed enough of these to have a retaliatory strike capability, but not so many as to spend itself into oblivion, something that helped bring the Soviet Union down.

Let us hope that when others get these weapons, a new treaty becomes higher on national agendas than it seems to be now. But even success at getting a new treaty signed depends on whether the US can be trusted to honor any treaty that it would sign.

In this case, the sins of the father are passed down to us, like it or not, which is why the damage is done can extend long after Trump and friends are gone… JD ]