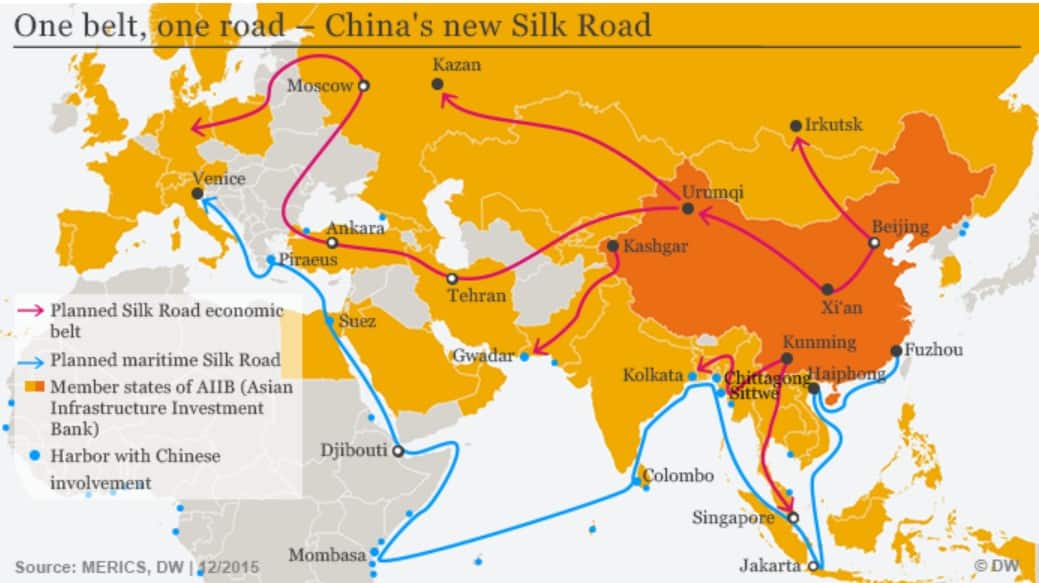 “Information Clearing House” –  In order to evaluate the claims of massive human rights violations of the Uyghurs, an ethnic and religious minority in the Xinjiang Uyghur Autonomous Region of China, it is important to know a few facts.

Xinjiang Province in the far western region of China is an arid, mountainous and still largely underdeveloped region. Xinjiang has significant oil and mineral reserves and is currently China’s largest natural-gas-producing region.

It is home to a number of diverse ethnic groups, including Turkic-speaking Muslim Uyghurs, Tibetans, Tajiks, Hui and Han peoples.

Xinjiang borders five Central Asian countries, including Afghanistan and Pakistan, where more than 1 million U.S. troops and even more mercenaries, contractors and secret agents have operated over four decades in an endless U.S. war.

What is happening in Xinjiang today must be seen in the context of what has been happening throughout Central Asia.

Xinjiang is a major logistics center for China’s ambitious Belt and Road Initiative. Xinjiang is the gateway to Central and West Asia, as well as to European markets.

The Southern Xinjiang Railway runs to the city of Kashgar in China’s far west where it is now connected to Pakistan’s rail network under the China-Pakistan Economic Corridor, a project of the BRI.

The U.S. government is deeply hostile to this vast economic development project and is doing all it can to sabotage China’s plans.

Map features Central Asia and China, including Xinjiang.This campaign is part of the U.S. military’s “Pivot to Asia,” along with naval threats in the South China Sea and support for separatist movements in Hong Kong, Taiwan and Tibet.

No U.N. report on Xinjiang

The U.S. and its corporate media charge that the Chinese government has rounded up 1 million people, mainly Uyghurs, into concentration camps. News reports cite the United Nations as their source.

This was disputed in a detailed investigative report by Ben Norton and Ajit Singh titled, “No, the UN did not report China has ‘massive internment camps’ for Uighur Muslims.” (The Grayzone.com, Aug. 23, 2018) They expose how this widely publicized claim is based entirely on unsourced allegations by a single U.S. member, Gay McDougall, on an “independent committee” with an official sounding name: U.N. Committee on the Elimination of Racial Discrimination.

The U.N. Office of the High Commissioner for Human Rights has confirmed that no U.N. body or official has made such a charge against China.

After this fraudulent news story received wide coverage, it was followed by “reports” from the Washington-based Network of Chinese Human Rights Defenders. This group receives most of its funds from U.S. government grants, primarily from the CIA-linked National Endowment for Democracy, a major source of funding for U.S. “regime change” operations around the world.

The Network of Chinese Human Rights Defenders shares the same Washington address as Human Rights Watch. The HRW has been a major source of attacks on governments targeted by the U.S., such as Venezuela, Nicaragua, Cuba, Syria and China. The network has long called for sanctions against China.

The CHRD’s sources include Radio Free Asia, a news agency funded for decades by the U.S. government. The World Uighur Congress, another source of sensationalized reports, is also funded by NED. The same U.S. government funding is behind the International Uyghur Human Rights and Democracy Foundation and the Uyghur American Association.

The authors of the Grayzone article cite years of detailed IRS filing forms to back up their claim. They list millions of dollars in generous government funding — to generate false reports.

Beginning in 1979, the CIA, operating with the ISI Pakistani Intelligence Service and Saudi money, funded and equipped reactionary Mujahedeen forces in Afghanistan to bring down a revolutionary government there. The U.S. cultivated and promoted extreme religious fanaticism, based in Saudi Arabia, against progressive secular regimes in the region. This reactionary force was also weaponized against the Soviet Union and an anti-imperialist Islamic current represented by the Iranian Revolution.

For four decades, the CIA and secret Pakistan ISI forces in Afghanistan sought to recruit and train Uyghur mercenaries, planning to use them as a future terror force in China. Chechnyans from Russia’s Caucasus region were recruited for the same reason. Both groups were funneled into Syria in the U.S. regime-change operation there. These fanatical religious forces, along with other small ethnic groups, formed the backbone of the Islamic State group (IS) and Al-Qaida.

After the Sept. 11, 2001, World Trade Center bombing, the very forces that U.S. secret operations had helped to create became the enemy.

Uyghurs from Xinjiang were among the Al-Qaida prisoners captured in Afghanistan and held in the U.S. prison at Guantanamo for years without charges. Legal appeals exposed that the Uyghur prisoners were being held there under some of the worst conditions in solitary confinement.

The U.S. occupation of Afghanistan and the massive U.S. invasion of Iraq in 2003 created shockwaves of dislocation. Social progress, education, health care and infrastructure were destroyed. Sectarian and ethnic division was encouraged to divide opposition to U.S. occupations. Despite promises of great progress, the U.S. occupations sowed only destruction.

In this long war, U.S. prisons in Afghanistan, Pakistan and Iraq were notorious. The CIA used “enhanced interrogation” techniques — torture — and secret rendition to Guantanamo, Bagram and the Salt Pit in Afghanistan. These secret prisons have since been the source of many legal suits.

According to U.N. investigations, by 2010 the U.S. held more than 27,000 prisoners in over 100 secret facilities around the world. Searing images and reports of systematic torture and prisoner abuse at Abu Ghraib in Iraq and Bagram airbase in Afghanistan surfaced.

In July 2010 WikiLeaks published more than 75,000 classified U.S./NATO reports on the war in Afghanistan.

Based on the leaked documents, the U.N. chief investigator on torture, Manfred Nowak, called on U.S. President Barack Obama to order a full investigation of these crimes, including abuse, torture, rape and murder committed against the Iraqi people following the U.S. invasion and occupation.

The leaked reports provided documentary proof of 109,000 deaths — including 66,000 civilians. This is seldom mentioned in the media, in contrast to the highly publicized and unsourced charges now raised against China.

The CIA’s National Endowment for Democracy pays handsomely for unsourced documents making claims of torture against China, while those who provided documentary proof of U.S. torture have been treated as criminals.

John Kiriakou, who worked for the CIA between 1990 and 2004 and confirmed widespread use of systematic torture, was prosecuted by the Obama administration for revealing classified information and sentenced to 30 months in prison.

Chelsea Manning’s release of tens of thousands of government documents confirming torture and abuse, in addition to horrific photos of mass killings, have led to her continued incarceration. Julian Assange of WikiLeaks is imprisoned in Britain and faces deportation to the U.S. for his role in disseminating these documents.

How much of the coverage of Xinjiang is intended to deflect world attention from the continuing crimes of U.S. wars — from Afghanistan to Syria?

In 2014 a Senate CIA Torture Report confirmed that a torture program, called “Detention and Interrogation Program,” had been approved by top U.S. officials. Only a 525-page Executive Summary of its 6,000 pages was released, but it was enough to confirm that the CIA program was far more brutal and extensive than had previously been released.

The U.S. regime-change effort to overturn the government of Syria funneled more than 100,000 foreign mercenaries and fanatical religious forces into the war. They were well-equipped with advanced weapons, military gear, provisions and paychecks.

One-third of the Syrian population was uprooted in the war. Millions of refugees flooded into Europe and neighboring countries.

Beginning in 2013, thousands of Uyghur fighters were smuggled into Syria to train with the extremist Uyghur group known as the Turkistan Islamic Party. Fighting alongside Al-Qaida and Al-Nusra terror units, these forces played key roles in several battles.

Reuters, Associated Press and Newsweek all reported that up to 5,000 Turkic-speaking Muslim Uyghurs from Xinjiang were fighting in various “militant” groups in Syria.

According to Syrian media, a transplanted Uyghur colony transformed the city of al Zanbaka (on the Turkish border) into an entrenched camp of 18,000 people. Many of the Uyghur fighters were smuggled to the Turkish-Syrian border area with their families. Speaking Turkish, rather than Chinese, they relied on the support of the Turkish secret services.

China is determined to follow a different path in dealing with fanatical groups that are weaponized by religious extremism. China’s action comes after terror attacks and explosives have killed hundreds of civilians in busy shopping areas and crowded train and bus stations since the 1990s.

China has dealt with the problem of religious extremism by setting up large-scale vocational education and training centers. Rather than creating worse underdevelopment through bombing campaigns, it is seeking to engage the population in education, skill development and rapid economic and infrastructure development.

Terrorist attacks in Xinjiang have stopped since the reeducation campaigns began in 2017.

In July of this year, 22 countries, most in Europe plus Canada, Japan, Australia and New Zealand, sent a letter to the U.N. Human Rights Council criticizing China for mass arbitrary detentions and other violations against Muslims in China’s Xinjiang region. The statement did not include a single signature from a Muslim-majority state.

Days later, a far larger group of 34 countries — now expanded to 54 from Asia, Africa and Latin America — submitted a letter in defense of China’s policies. These countries expressed their firm support of China’s counterterrorism and deradicalization measures in Xinjiang.

More than a dozen member countries of the Organization of Islamic Cooperation at the U.N. signed the statement.

A further statement on Oct. 31 to the Third Committee of the U.N. General Assembly explained that a number of diplomats, international organizations, officials and journalists had traveled to Xinjiang to witness the progress of the human rights cause and the outcomes of counterterrorism and deradicalization.

“What they saw and heard in Xinjiang completely contradicted what was reported in the [Western] media,” said the statement.

This article was originally published by “Workers World” –