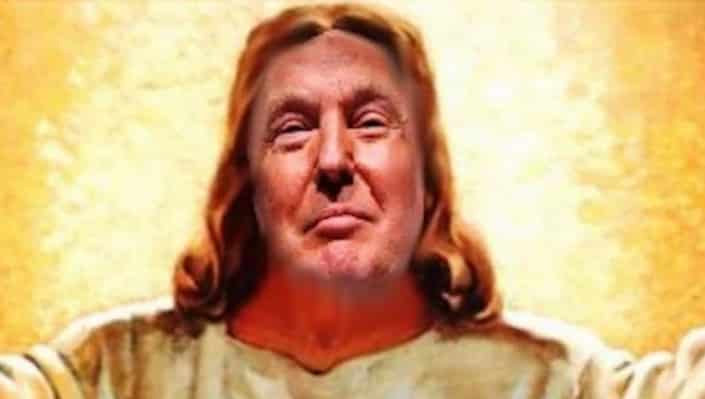 America has its first president that now considers himself “bloodline royalty,” the Sephardic family that took on the name “Drumpf” when it arrived in Germany in the 17th century, as with so many others, to be welcomed by the Rothschilds.

As “King of Israel,” Trump has called on Americans to follow QAnon and organize to round up and kill opposing party politicians, unfriendly journalist like Khashoggi, academics, Jeff Bezos of Amazon and the other cannibals and satan worshipers now being compiled in lists by GOP/QAnon operatives in every voting precinct in America.

Behind this effort stands 30 million Christian Zionists seeking the end times, the majority of whom are involved in QAnon, officially a terrorist organization and listed as such by the Federal Bureau of Investigation.

This is going to be really fun.

Leading it, according to Robert Steele, are traitors from the West Point class of 1986, an organization VT has asserted is a “school for warlocks.”  If only we were making this up.

Steele’s analysis of what he sees as traitors to Trump is quite excellent work.

We differ on Trump’s role.  VT people don’t all agree on things, that’s called “freedom of speech.”  QAnon will be getting rid of that soon enough, no reason to confuse people with facts.

My good friend Robert Steele may not love Trump but he comes very close.  For me, I fight every day against feelings that have me look on the US as “bad guys with black hats” in a cowboy movie.  But now I give up.  I am willing to accept QAnon and Trump and join his army, as others have, and begin plotting the murder of up to 140 million Americans now “proven” to be pedophile Satanists and cannibals.

I was involved in an investigation at the request of the White House some years ago in response to a blackmail/smear attempt against a GOP president.

I identified, confirmed since by many sources, White House and Pentagon complicty, in particular, in a large scale child trafficking ring among America’s “elites,” most of whom were tied to elements best described as “right-wing…Zionist…Wall Street…Big Oil…Military-Industrial…”

Cited were a dozen or so facilities near Washington, actually used for what the GOP claimed Comet Pizza was, to house imprisoned sex slaves, children, who would be later eliminated.

The official FBI investigation, and we have this from direct sources, traced this operation to National Security Council members (White House staff…at highest level), to the US Department of Energy, all the way to the top there, our nuclear weapons people, and to AIPAC and the ADL.

The censored version, with all the gritty details removed, was called the “AIPAC Spy Scandal.”  No one can claim they don’t know, even Google left part of it available: 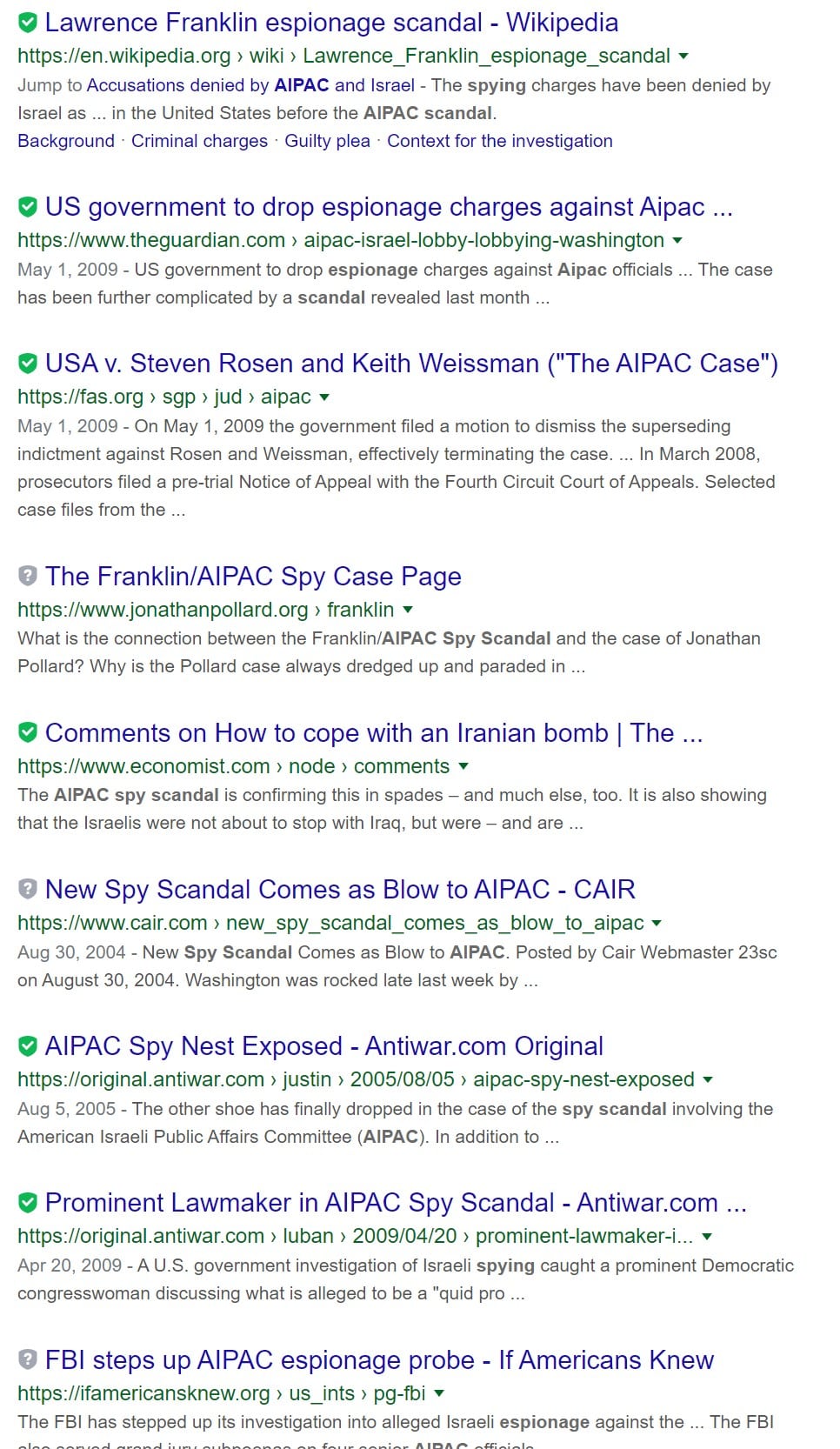 Behind it, or what could be easily identified, was the Israel lobby and secret societies which include nearly all leaders of major Christian Evangelical sects.

Behind this was the assertion, one held among “conservative elites,” that g-d had abandoned mankind and that satan better represented conservative ideals.

As we speak, QAnon is organizing armed teams to begin arrests.  One in Colorado was recently broken up with a mother for some reason found unfit by social services facing life in prison.  Let us be clear, this mother may well have been totally correct about social services and government corruption, which crosses all party lines depending on the community.

We don’t know the fact and if we depend on the press we never will.

The real issue is whether Trump is criminally insane.  I found myself upset over the murder of Soleimani, knowing the reasons listed in the totally Deep State/Trump/QAnon MSM were fake.  Soleimani is the man who defeated ISIS and, in doing so, placed the Deep State, Trump and his Kosher Nostra handlers on their asses.  Soleimani knew the Deep State was after him and accepted his fate.

If you don’t know why Soleimani is the most respected and loved man of our times, and he really is, learning will now make you cry and if you are an American and sane, feel enormous shame.

OK, our issue, we follow Steele and say Trump is sane.  One issue, which Steele would have me bring up, is that we are now getting confirmations on Trump’s own sexual issues, multiple confirmations of full details that were edited out of the famous Dossier, which adds an onlooker, a longtime gay partner, to Trump’s circus of piss.

I have interviewed, personally, a witness supplied to me by the White House.

That is an accurate statement, which brings up about a thousand questions, doesn’t it!

Here is what Trump is advocating, that Americans arms themselves (more) and form groups.  Those groups, according to Trump/QAnon (and Trump is totally behind this) need to make their own lists of personal enemies along with “liberals” as pointed out by Israeli controlled media.

These people are, according to Trump, cannibals who kidnap, molest and then eat babies

As one of too many Americans who have actually killed people, I don’t really have qualms about it.  There is the issue of following mob rule, following perhaps the least mentally stable and capable of Americans in an effort to eliminate all Americans with education and conscience.

We’re going to have to think about that one a bit.  In the interim, I say “listen to your president,” and Steel reminds me over and over, that we must respect the president, even one who calls for lawless gangs to murder millions for reasons that may seem to some a bit “off.”

From the Daily Beast

Daily Beast: Colorado mother Cynthia Abcug became an unlikely star on the fringe right last year thanks to a battle with her state’s child-welfare department over custody of her son, which became a cause célèbre among believers of the bizarre pro-Trump QAnon conspiracy theory.

But a recently unsealed arrest warrant alleges that Abcug had bigger plans, working with other armed QAnon believers to plan a kidnapping.

Montana police arrested Abcug in Kalispell, Montana, on Dec. 30, on a felony conspiracy to commit kidnapping arrest warrant issued in Colorado. Abcug had allegedly teamed up with other QAnon believers to carry out the kidnapping, according to witness statements to police.

(Our sources say militia organizations in Montana, tied to the RNC and a former Trump official who had planned to assassinated then-President Obama, were directly involved.)

The alleged target of the purported kidnapping is redacted in court documents, but the individual is described as once having been in Abcug’s “care.” The 50-year-old’s son was taken from her by Colorado child-welfare officials in the spring of 2019.

Police in Parker, Colorado, first became aware of Abcug’s alleged plan in late September, when her daughter told authorities that she had been discussing a kidnapping “raid” with other QAnon believers. Abcug’s daughter told police she was concerned that someone could be hurt in the raid.

According to a heavily redacted police affidavit, Abcug’s daughter told police that her mom was a committed QAnon believer who had been discussing how “people from the Q-Anon group planned to kidnap” the unnamed person. Abcug had obtained a gun of her own, according to her daughter, and talked about a person or group of people “dying” in a “raid” conducted by QAnon believers.

Police found QAnon paraphernalia at Abcug’s home, including blue awareness bracelets promoting a QAnon website and the name of a prominent QAnon Twitter poster. Abcug allegedly stressed “her belief that people would be injured during the raid,” saying that they were “evil Satan worshipers” and “pedophiles,” according to the affidavit.

(Editor’s note:  Not wanting to put gasoline on the fire, as it were, but our own investigations have revealed a pattern of pedophilia and child abuse among those working for “child welfare” organizations.  In fact, we can cite cases where parents have been imprisoned, one for 14 years, for sexually molesting their own children when it was really done by child welfare employees.

QAnon is correct about this as we believe it is endemic and widespread.)

Abcug’s daughter said her mom typically only left the house to meet with fellow QAnon supporters.

“[Abcug’s daughter] explained that Abcug got involved with Q-Anon, and that Abcug has repeatedly talked about a raid (to her and others), wherein people from the Q-Anon group planned to kidnap [name redacted],” the arrest warrant affidavit reads. “She expressed concern that people were going to be injured, and that it was going to occur ‘soon.’”

QAnon, an elaborate conspiracy theory that posits that Donald Trump is at war with Satanic pedophile-cannibals in the Democratic Party, began in late 2017 with anonymous message board posts made by a person or a group of people known only as “Q.” Since then, it’s won adherents among Trump supporters, including some GOP congressional candidates. The president and his re-election campaign have repeatedly flirted with QAnon promoters, even though the FBI considers QAnon to be a potential domestic terror threat.

Other QAnon believers have been charged with crimes, including church vandalism and an attempt to shut down a bridge with an improvised armored truck.

Abcug’s feud with state officials over custody of her son turned her into a star among QAnon believers and other fringe activists after she broadcast her allegations about supposed abuses committed by the state’s child-welfare system on right-wing websites like InfoWars, Big League Politics, and PJ Media.

A segment of QAnon believers has become convinced, is an outgrowth of the Pizzagate conspiracy theory, that child-protective services double as a kind of hunting ground for the mythical pedophiles they’re convinced run the anti-Trump “deep state.”

“The Child Protective Services was a front line for funneling in the trafficking,” Abcug said in a June appearance on a QAnon-affiliated YouTube channel. “I had not been open to that yet.”

The custody case brought Abcug into contact with more QAnon believers, including a man identified in the police affidavit as “Ryan,” and “armed guard” who was staying with her. Abcug reportedly described her associate as a “sniper.”

Abcug stopped responding to police during their investigation last September and eventually left Colorado, only resurfacing in Montana in late December. Abcug was arrested after a tip from the FBI, according to a local news report.