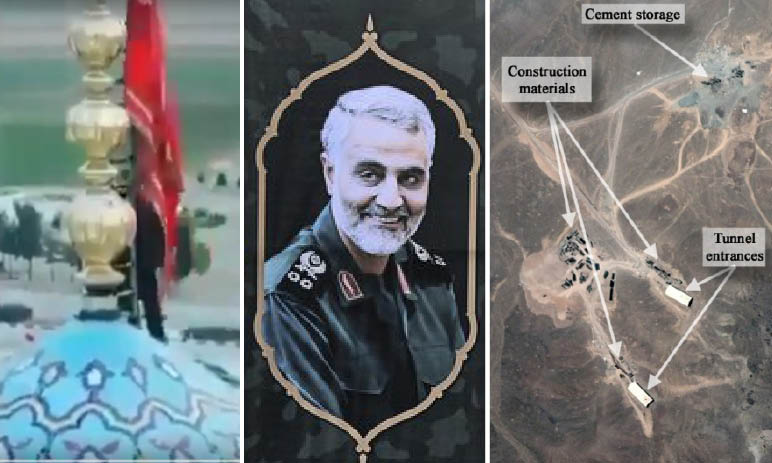 Donald Trump is a tycoon; an entrepreneur who became a business tycoon thanks to his ability to get around the laws and to anoint the right friends who led him to be President of the United States of America thanks to the financial arms lobby.

It is no worse than his predecessor Barack Obama who caused more than 500 thousand deaths in Syria, 10 thousand in Ukraine and 40 thousand in Venezuela for the sanctions tightened by Trump and so on. It is only more incompetent and cheeky.

As a businessman, he thinks that everything has a price: even international credibility built on lies. Unfortunately for him and fortunately the planet earth is not like that.

There is a “breakpoint”, beyond which geopolitical actions built thanks to the military force of missiles and drones become boomerangs. The killing of Iranian general Qassem Soleimani, head of al Quds Forces, and Iraqi Abu Mahdi al-Muhandis, are the point of no return, as written by hundreds of war analysts from around the world.

What Trump has ignored, obviously on the advice of US military strategists who receive gifts from arms holdings only if they proliferate, is the potential of Iran’s revenge, now legitimated by the whole world to become David against Goliath to repel the arrogance of the United States, repeatedly accused with irrefutable evidence of having armed and financed for years the Islamic State itself which they claim to fight to justify their presence in Iraq and Syria, were to steal oil with impunity.

Iran’s revenge begins in Qom, a town a few dozen kilometers from Tehran that has become in recent days a symbol of the will to retaliate against the Americans but has been under observation of the NSA (National Security Agency) for over a decade, the most important US body for the defense of national security that works in close synergy with DHS (Defense Homeland Security) led directly by the White House.

“The red flag was raised above the Jamkaran mosque in Iranian Qom Saturday, as a sign of revenge for the assassination of the commander of the IRGC Quds force general Qassem Suleimani and other martyrs who fell in the United States strike that targeted Baghdad international airport at dawn on Friday, »reports the Lebanese agency Al Manar website along with many others.

What is not written is that a few kilometers from Qom there is the most important nuclear bunker in Iran: an atomic material production plant useful for the construction of bombs and missiles much more powerful than the one dropped on Hiroshima.

A few hours ago Iran has declared it will no longer abide by any of the restrictions imposed by the 2015 nuclear deal. In a statement, it said it would no longer observe limitations on its capacity for enrichment, the level of enrichment, the stock of enriched material, or research and development. The statement came after a meeting of the Iranian cabinet in Tehran.

Before reporting the alarm raised by the American experts, it is necessary to give space to the interview made by CBS to Michael Morell, former deputy director of the Central Intelligence Agency (the American counterintelligence) who said that the decision of the American President Donald Trump to assassinate the Iranian lieutenant general Qassem Suleimani will lead to “American deaths”. “

Morell told CBS News on Friday that the deadly attack by the United States will trigger a harsh response from the Islamic Republic of Iran, saying that the United States will have to pay” a very high cost “for the killing of General Suleimani – he reports always Al Manar – There will be dead Americans, civilian Americans, because of this” said Morell, adding that Americans are no longer safe in Iraq, Lebanon, Bahrain and other places in the Middle East.

Morell also claimed that the assassination of General Suleimani sets a “precedent that senior officials are at stake in this type of hybrid scenario, not yet at war” and that the decision to assassinate the top Iranian commander will result in “an extraordinarily high price. And that’s why the Bush administration and the Obama administration have chosen not to do something like that.”

IRAN NUCLEAR POWER THANKS TO TRUMP

If Iran can be called a nuclear power today, we must thank President Trump. The suspicion that Tehran was carrying out atomic weapons development plans was enough for the White House to withdraw from the Joint Comprehensive Plan of Action (Jocpa) legitimizing Iran to do the same despite the agreement signed in 2015.

Therefore after the break of the treaty, the Iranian government has resumed the uranium enrichment activities already developed in its Natanz plant but especially in the underground one in Fordow, where the centrifuges operate at 90 meters underground protected by the rock of a mountain and they started to work at breakneck speed from 2018, while until 2017 they operated under the strict control of the International Atomic Energy Agency (IAEA) which had ascertained the effective compliance with the rules imposed by Jocpa.

But in April 2018, Israeli Prime Minister Benjamin Netanyahu, who can count on at least 80 nuclear warheads aimed at Tehran, revealed the existence of “55,000 files of information that” incriminate “Iran with an intelligence operation”. Netanyahu said the files had been transferred to a “highly secret location in Iran”, an image of which was shown.

Obviously, like most of the statements by the prime minister of Tel Aviv, who is under investigation today for various episodes of serious corruption, the spectacular images are not followed by a single test. But this was enough for the ally Trump to break the nuclear deal with alarming consequences reported by the American analysts themselves.

The Iranian government is shortening its nuclear breakout time — the amount of time required to produce enough weapons-grade uranium for a single nuclear weapon. Tehran has accomplished this through several steps in the last few months of geopolitical strategist Majid Rafizadeh, a board member of Harvard International Review and president of the International American Council in the Middle East wrote it on 26 November.

Iran’s government first increased its enriched uranium stockpile beyond the 300-kilogram limit; it enriched uranium to levels beyond the cap of 3.67 percent and then activated 20 IR-4 and 20 IR-6 advanced centrifuges. The Iranian leaders even boasted that their government is now exploring new uranium enrichment programs and producing centrifuges» added the expert on the Gatestone Institute website.

Most recently, the head of the Atomic Energy Organization of Iran, Ali Akbar Salehi, declared that Iran has an adequate supply of 20% enriched uranium., “Right now we have enough 20% uranium,” he told the Iranian Students News Agency, ISNA, “but we can produce more as needed”. He added that the country is resuming uranium enrichment at a far higher level at the Fordow nuclear facility — an underground uranium enrichment facility which is reportedly located on one of the bases of the Islamic Revolutionary Guard Corps (IRGC­­) — injecting uranium gas into centrifuges and operating 60 IR-6 advanced centrifuges.

Could this be the reason why Washington decided to challenge with the missiles the Iranian Revolutionary Guard and Qassem Soleimani, leader of the Quds forces, the militias that helped Iraq and Syria to defeat the Islamic State?

The nightmare of Fordow’s seemingly unassailable plant is not recent for the US. Already in 2012, the NSA agency paid close attention to this factory of potential nuclear weapons. The Washington Post then made a long article to explain how one of the last powerful missiles made by the USA, the Massive Ordnance Penetrator (Mop), built at the time in 20 copies costing 330 million dollars, could have damaged the plant although it was able to penetrate underground, before exploding, only for 200 feet instead of the 300 where the rooms of the Iranian centrifuges for uranium production are located.

Not only. In order to drop the bomb, an invisible B52 bomber is needed, which is NOT totally invisible to radar. Therefore, from the various hypotheses of the experts, it emerges that in order to allow the plane to throw the Mop on Fordow it is necessary to overcome the anti-missile defense system which today is the effective and powerful Russian-made S-300.

When Israel and  Iran successfully bombed Iraq’s Osirak nuclear reactor, they were able to easily evade Iraq’s air defenses.  It’s unlikely Iran’s Surface to Air missile sites will be as unprepared as its neighbors were –even in the event of a sneak attack.

Furthermore, according to the Joint Warfighting plan, if “advanced radiofrequency weapons are employed for the functional defeat of [Iran’s] electronics [missile and detection capabilities],” the US planes may not be able to employ “precise three-dimensional delivery.” reported a detailed article from 2012, well before the S-300s were positioned around the Fordow plant, from where Tehran’s revenge can really start.