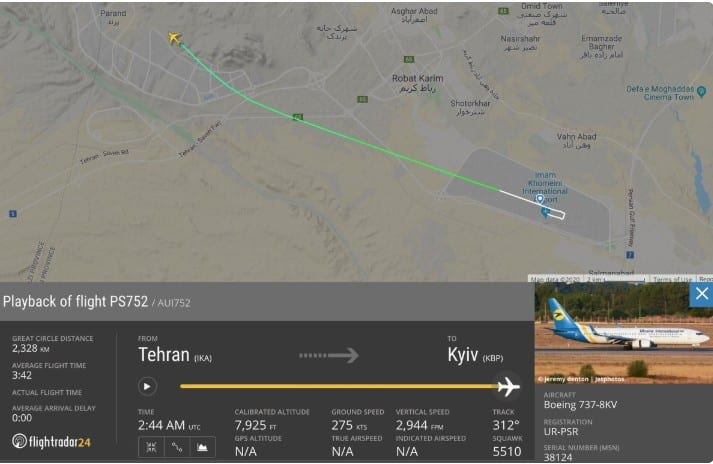 If you don’t like it, go screw yourself.  Editors

We are following reports that a Ukrainian 737-800 has crashed shortly after takeoff from Tehran. #PS752 departed Tehran at 02:42UTC. Last ADS-B data received at 02:44UTC. https://t.co/qXWHUPGDTu pic.twitter.com/vuAi6TOqTp

Al Jazeera: A Ukrainian airliner with 180 passengers and crew on board has reportedly crashed near Tehran’s Imam Khomeini airport in Iran on Wednesday.

According to the Iranian media, the Boeing 737-800 jet crashed near Parand, a suburb southwest of capital Tehran shortly after take-off.

There were no immediate reports on casualties.

[ Editor’s Note: Just found this video of the plane coming down on fire, which was not reported in this story… Jim W. Dean ]

#Breaking First footage of the Ukrainian airplane while on fire falling near #Tehran pic.twitter.com/kGxnBb7f1q

The actual departure time was delayed for almost an hour at 6:12am.

A video posted by Iran’s ISNA news agency showed a faint glow of light flickering shortly before a huge explosion was seen.