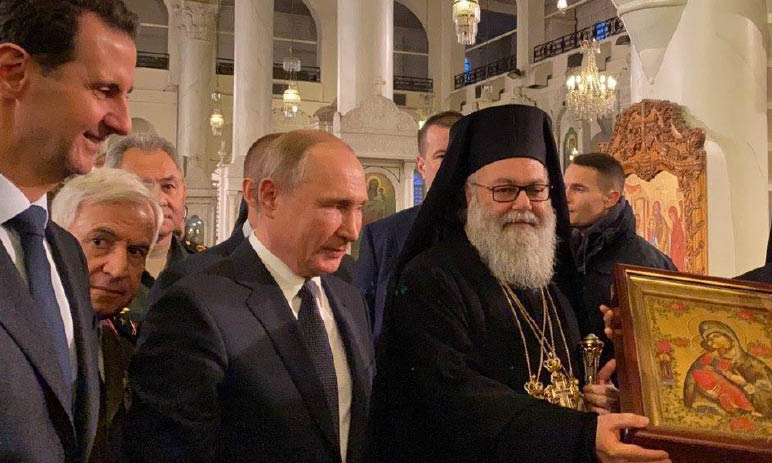 American President Donald Trump spent the Christmas holidays in the sumptuous Mar-y-Lago villa in Palm Beach from where he ordered the Baghdad massacre against General Qassem Soleimani and nine other Iranian and Iraqi victims.

Russian President Vladimir Putin celebrated Orthodox Christmas on Tuesday 7 January by visiting Moscow troops stationed in Damascus in defense of Syria’s national sovereignty and then donated an icon of the Madonna to the Greek patriarch after visiting a mosque together with the president Syrian Bashar Al Assad.

In these two frames contemporary history is carved in a pendulum that oscillates between the lie of the fake good and the truth of the honest man.

In the image that portrays the Shiite Muslim Assad together with the Orthodox Christian Putin and the Maronite Catholic religious before the image of Mary there is the essence of hope for the whole planet. This is the most powerful weapon of any army: the hope of peace!

In the image of the US billionaire missile-firing tycoon surrounded by his wife top model and many Neo-Con politicians financed by various Zionist strangershere is only the ghostly shadow of arrogance ready to challenge the whole world to steal oil, gas, resources underground, territories and finally even the soul of the peoples confused between a killing capitalist liberalism of the individual and communist slavery that denies the very spirit of man and God.

From far away Moscow Putin must come to the Mediterranean to teach Europe, the self-styled Western Christians and the Catholic Church itself the true meaning of Ecumenism.

From bloody Syria Assad must shine in the Middle East, increasingly unstable in Libya and Iraq to show how an Islamic knows how to be devoted to Our Lady, not only because mentioned by the Koran but above all because Mother of Christ and true Christians who believe in Her.

While in Tehran Soleimani is buried in front of an oceanic and convulsive crowd (enough to cause thirty deaths in the crowd) in Damascus the Orthodox Christmas is celebrated in a choral fraternal embrace that is worth more than a thousand art-built marches for Peace.

Below we report the chronicle of this great day narrated by SANA (Syrian Arab News Agency) in the hope that the Italian political idiots and journalists who applauded the Trump massacre in Baghdad a few days before the great Christian holiday of Epiphany learn the true meaning of the anniversary of Christmas. And of this period devoted to peace, love and joy for the birth of Jesus Christ and his “royal agnition” by the three magician Kings of the East.

Today as then wiser than those of the West …

Damascus – Russian President Vladimir Putin arrived in Damascus Tuesday on a visit to Syria. Presidents Bashar al-Assad and Putin held a meeting at the Russian forces’ assembly location in Damascus.

Presidents al-Assad and Putin listened to a military briefing by the commander of the Russian forces operating in Syria.

President Putin offered congratulations to the Russian forces operating in Syria on occasion of Christmas.

President al-Assad also congratulated the Russian officers and soldiers on occasion of Christmas, expressing the appreciation of himself and the Syrian people for the sacrifices made by the Russian forces alongside their counterpart in the Syrian Arab Army.

Later, Presidents al-Assad and Putin discussed, during two meetings, one of them was a closed meeting, the recent developments in the region, as well as plans for eliminating the terrorism which threatens the safety and security of Syrian citizens in Idleb, and developments in the north of Syria and Turkey’s actions there, as well as supporting the political track and preparing suitable conditions for it.

The two Presidents affirmed that the main target of the political track is the return of security and stability to all Syrian regions, the achievement of the Syrian people’s interests in preserving Syria’s unity, independence and safety of its territories to push towards a better economic environment to start the reconstruction process.

Accompanied by President al-Assad, President Putin toured Damascus city, visiting the Grand Umayyad Mosque and the shrine of St. John the Baptist located in it, writing an entry in the record of visitors.

President Putin also visited the Mariamite Cathedral of Damascus (dedicate to Ous Lady of Dormition – ed), the oldest church in Damascus and the seat of the Greek Orthodox Patriarchate of Antioch and All the East, gifting it an icon depicting the Virgin Mary. The two presidents lit two candles for prevailing peace and safety in Syria. President Putin concluded his visit to Syria as President al-Assad bid Farewell to him at Damascus international