The black hole M87, which recently received the Hawaiian name “Powehi”, and the jet of high-energy particles blasting from its centre have been observed by astronomers for years. NASA’s Chandra X-ray observatory was the first to record the extreme speeds of this radiation.

The space giant M87, located 55 million light years from Earth and weighing 6.5 billion times as much as the Sun, has been caught blasting a jet of high-energy particles from its centre at a record speed, pushing the speed of light. The never- before-seen observation was made after years of studying the jet in radio, optical, and X-ray light with the Chandra advanced astrophysics facility, Phys.org reports. The study was presented at the American Astronomical Society meeting in Hawaii.

“This is the first time such extreme speeds by a black hole’s jet have been recorded using X-ray data. We needed the sharp X-ray vision of Chandra to make these measurements”, Ralph Kraft from the Centre of Astrophysics at Harvard and Smithsonian (CfA) in Cambridge, Massachusetts, revealed.

While the notion that nothing is able to travel faster than the speed of light is considered to an unbreakable law of physics, the researchers have found what the leading author of the study, Brad Snios, described as “an example of an amazing phenomenon called superluminal motion”.

Using Chandra data from between 2012 and 2017, the team tracked two X-ray knots – clumps of particles formed within this beam from the material, redirected from the accretion disk. The observed clumps were located at a distance of about 900 and 2,500 light years from the black hole, named “Powehi”. They were discovered to be moving at apparent speeds reaching 6.3 times and 2.4 times the speed of light respectively. However, this is only an illusion of physics-breaking rapid movement that occurs when a jet travels close to the speed of light along a direction within our line of sight.

“Our work gives the strongest evidence yet that particles in M87’s jet are actually traveling at close to the cosmic speed limit”, Snios told Phys.org.

The observation is also said to prove that X-rays can be used as “an accurate cosmic speed gun”. The knot located closer to the black hole was discovered to have faded by over 70% over the six years of observations. As is theorised, the fading might be the result of particles losing energy because of the radiation from spiralling around a magnetic field. 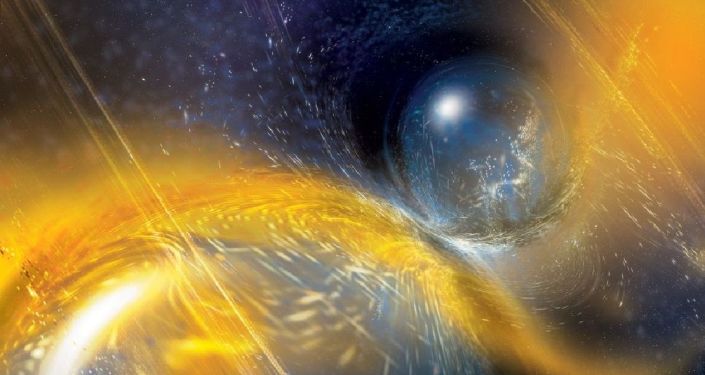 At the same time, the combination of the Chandra observations and the data from the Event Horizon Telescope, which allowed seeing the ring around the black hole said to be a hundred million times smaller than the aforementioned jet, can help paint a broader picture.

“It’s like the Event Horizon Telescope is giving a close-up view of a rocket launcher and Chandra is showing us the rockets in flight”, another co-author of the study, the CfA’s Paul Nulsen, said.