‘No lives lost’: Trump holds fire on ‘big missiles,’ talks peace after Iran’s strikes on US bases in Iraq

[ Editor’s Note: Good old Donald was not about to pass up weaving in some penis envy into a major presidential speech. Added to that was revealing the new US secret weapon, sanction. I am not so sure that is going to intimidate Iran after all it has been through.

Iraq can hopefully get back to forming a new government, and getting the US out of the country and hinder its current efforts to carve off the western part of the country with Saudi Arabia to steal all the oil there and block any land bridge with Syria.

One of the possible spinoffs from the assassination is Iraq’s waking up to its being an occupied country, with the US acting as a Saudi proxy with only 5000 troops in country, and the Israelis running a similar game out of the Kurdish regions with their drone attacks.

We have the proof from Prime Minister Mahdi’s Parliament speech last Sunday that the US had told him the Israelis had done some of the Popular Militia bombings, something that I am sure Israeli military Intel said, “Thank you Donald”.

Trump was simultaneously his own handler and puppet today, not a skill that most that went to business school sought to master… Jim W. Dean ] 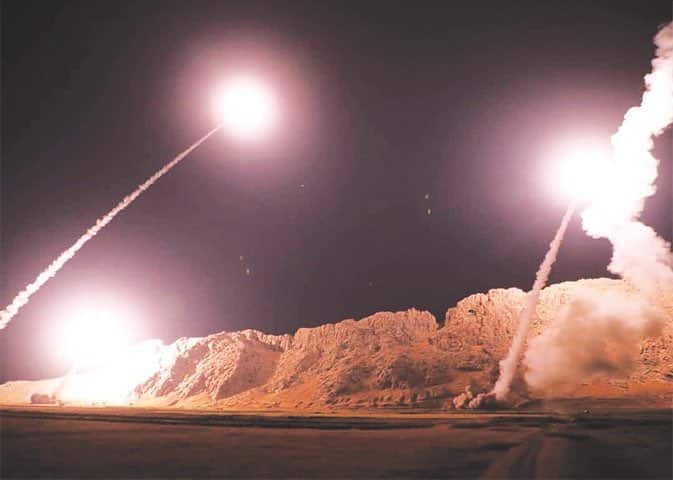 US President Donald Trump is delivering an eagerly-awaited address to America, as the country stands on the brink of war with Iran. Trump’s speech comes hours after Iranian missiles struck two US bases in Iraq.

Speaking from the White House, Trump backed away from threatening further strikes against Iran, describing Tehran’s stand-down as “a good thing for all parties concerned.”

Our missiles are big, powerful, accurate, lethal and fast…The fact that we have this great military and equipment, however, does not mean that we have to use it.

Trump did, however, vow to impose new economic sanctions on the Islamic Republic, in addition to the thousand or so imposed since the US withdrew from the Joint Comprehensive Plan of Action (JCPOA, or Iran nuclear deal) in 2018.

“These powerful sanctions will remain,” he said, “until Iran changes its behavior.” “Iran must abandon its nuclear ambitions and end its support for terrorism,” Trump continued. “Time has come for the United Kingdom, Germany, France, Russia and China to recognize this reality. They must now break away from the remnants of the JCPOA.”

While Trump recently declared that the US would wipe out 52 Iranian state and cultural targets if American interests were attacked, he struck a more conciliatory tone in his speech on Wednesday.

After boasting about America’s “big missiles,” Trump suggested that under a new deal, Iran could become a “great country,” and could cooperate with the US on areas of mutual benefit.

“ISIS [Islamic State, IS, ISIL] is the natural enemy of Iran,” he said. “The destruction of ISIS is good for Iran. And we should work together on this and many other shared priorities.”

Early on Wednesday, Iran rained a barrage of missiles on two military bases used by American troops in Iraq. The missile attack came in response to the drone assassination of Iranian general Qassem Soleimani by the US in Baghdad on Friday.

Soleimani, according to Washington, had orchestrated a series of attacks on American forces in Iraq, and was allegedly plotting further strikes through Iranian-backed militias in the country. Tehran called the killing an act of “international terrorism,” vowing to take revenge.

Iranian Foreign Minister Mohammad Javad Zarif described the missile attack as a “proportionate measure” taken in self-defense. Zarif added that Tehran does not intend to escalate the situation further, but would target US allies in the region if Washington responds with force.

Iranian Supreme Leader Ayatollah Ali Khamenei said that the strikes served as a “slap in the face” for the United States, but were not “sufficient” to remove “the corrupting presence of America in the region.”