Reactions pour in after Iran targeted US bases with ballistic missiles

[ Editor’s Note: The Trump gang and the US top military command assassination of Soleimani flies in the face of everything that America has said it stands for. And worse than that, it was stupid.

If Americans don’t scream for the appropriate resignations and full independent investigations as to how this debacle happened, then they will be participating in being a security threat to themselves, one hell of a sad state of affairs.

Overlooked in all this was the unhealthy list of unconfirmed top administration appointments and that the lawyers working for the Trump regime gangsters told them they could avoid long and embarrassing confirmation hearings by appointing “acting heads” of organizations.

This is a typical hoodlum approach for penetrating and taking over a government by working around the checks and balances that the Founding Fathers put there to protect us from ever having a Trump gang over the country.

So far we have Boris Johnson onboard the Trump gang plank, telling Iran to avoid “repeated reckless and dangerous” attacks. He knows that Iran had the right to respond to the US assassination under UN and international laws and regulations, the same ones the US would be quoting if the shoe were on the other foot.

Johnson has his own political gang that the unfortunate Brits have voted in, having no other choice versus a divided and often hapless Left, which is more interested in winning party boss slots than in advancing its core issues.

These are all small men, when great ones are needed. Will the Pentagon defend us from the Trump gangsters, or side with them?

This is the sad question that faces us, and we will be watching what the veteran community says and does, but its past quietness on all this is not a good omen. They have their own oath to consider, if they deserve the respect they desire, “to defend the country from all enemies, foreign and domestic.

If they don’t think the Trump gang is a domestic enemy, then they have just stood down in my book. It is insufficient to hope for a Vietnam style protest after the fact, when the protest is needed before or during the insanity to reduce the carnage.

Americans need to up their game as to who they give their respect to and why, as we also have taken the oath growing up as children.

The US coffins that will be returning home on solemn military planes will not be due to what Iran did, but due to our own US command in presenting an illegal assassination option for the president, with suspiciously provided intelligence when there was no rush to make a decision to do such a thing with the obvious deaths that we would incur.

Gordon and I would have been jumping up and down on the table screaming how stupid they were, and of course getting fired on the spot … Jim W. Dean ] 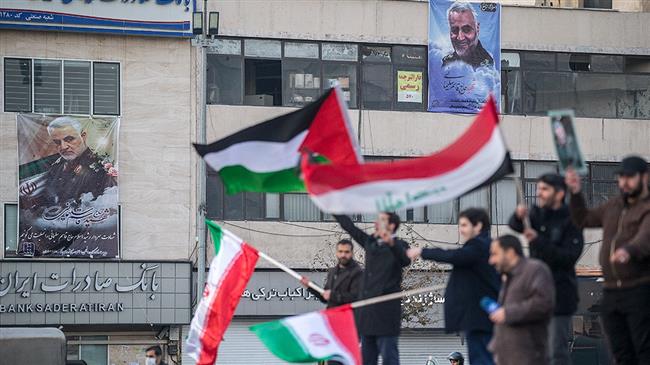 Reactions are pouring in after Iran’s Armed Forces launched missile strikes on American bases in Iraq in retaliation for the US assassination of Lieutenant General Qassem Soleimani, with several countries calling for de-escalation and restraint.

In the early hours of Wednesday, Iran launched tens of missiles at two bases housing US troops in Iraq’s western Anbar Province and Kurdistan regional capital, Erbil, in revenge for the American targeted killing of General Soleimani and his companions.

Tehran says its missiles precisely hit their targets, with initial reports of casualties.

The Iraqi military said in a statement on Wednesday that a total of 22 Iranian missiles were fired, out of which 17 hit Ain al-Assad and 5 struck the Erbil base, adding that added that there had been no casualties among Iraqi forces.

The Islamic Republic warned the US of a more crushing blow if they opt for any new military aggression, advising the American military to immediately leave the region.

The Iranian missile attacks have drawn reactions from several states as well as the European Union.

Beijing urged the United States and Iran to exercise restraint and resolve their dispute via dialog.

Chinese Foreign Ministry spokesman Geng Shuang reiterated a call for a peaceful resolution of the conflict during the daily briefing on Wednesday.

Earlier, China criticized the United States for aggravating tensions in the Middle East through its use of force in the standoff with Tehran.

An editorial on Tuesday in the government-run China Daily blamed the US for creating a “cauldron of tensions” in the region.

United Arab Emirates Minister of State for Foreign Affairs Anwar Gargash took to Twitter to underline the need for de-escalation in the region.

Separately, Emirati Energy Minister Suhail al-Mazroui said he did not expect a war to break out after the missile attacks.

“We will not see a war,” he said at a conference in Abu Dhabi. “This is definitely an escalation between the United States, which is an ally, and Iran, which is a neighbor, and the last thing we want is more tension in the Middle East.”

Japanese Chief Cabinet spokesman Yoshihide Suga said the government would “coordinate with the related governments to collect intelligence while we ensure the safety of Japanese citizens in the region.”

“Japan will also urge all related nations to do their utmost diplomatic effort to improve the relations,” he added.

New Zealand’s Acting Prime Minister Winston Peters, expressed concern over the escalation of tensions between the US and Iran.

“Now is the time for restraint and de-escalation, and for diplomacy to take over….the government has been informed that all New Zealand personnel are as safe as they can be in these developing circumstances,” he said.

The Philippines ordered a mandatory evacuation of its citizens from Iraq.

“The Alert Level in the entire Iraq has been raised to Alert Level 4 calling for mandatory evacuation,” said Eduardo Mendez, a spokesman for the Philippines’ Department of Foreign Affairs.

Bernard Olalia, head of the Philippine Overseas Employment Agency, later said the Filipinos in Iran and Lebanon had also been told to leave.

Filipino Defense Secretary Delfin Lorenzana said two battalions of troops and marines would be sent to Iraq to help with the evacuation.

South Korean Foreign Ministry said it held a meeting of its officials to discuss measures to cope with the Middle East tensions and ensure the safety of it nationals living or staying there. A ministry official said it was not considering South Koreans’ withdrawal from Iraq.

“We are not at the stage where we would consider a withdrawal (of South Koreans) as for now,” the official said. “We’re closely monitoring the situation and will devise measures stage by stage in consideration of various possibilities.”

EU foreign affairs chief Josep Borrell has called on all parties to de-escalate the current crisis.

Iran’s raids on airbases in Iraq “used by US and coalition forces, among them European, is yet another example of escalation and increased confrontation. It is in no one’s interest to turn up the spiral of violence even further,” he said.

Australia Prime Minister Scott Morrison told reporters that all of the country’s diplomatic and military personnel stationed in Iraq were safe.

He also noted that the situation in Iraq was very fluid and that he was receiving constant updates.

Morrison further said that he had ordered “whatever actions are necessary” to be taken to protect Australian personnel in the Middle East.

Canada’s Chief of Defense Staff General Jonathan Vance stressed that no Canadian troops had been hurt by the barrage of Iranian missiles.

“CAF families: I can assure you that all deployed CAF personnel are safe & accounted for following missile attacks in Iraq. We remain vigilant.”

Ukraine Govt. Says crash no accident, Did US shoot down another airliner?

Ukraine’s embassy in Iran has deleted a statement posted on its website that blamed the deadly plane crash near Tehran on engine failure, and Ukrainian President Volodymyr Zelensky has vowed to open up criminal proceedings into the disaster that left 176 people dead.

Ukraine’s embassy initially agreed with Iranian statements that the Wednesday morning crash was due to a mechanical failure—but the embassy later issued a new statement omitting the mention of engine failure as the cause. It also said any previous comments about the cause of the crash weren’t official and should be discounted.

Zelensky said Ukraine’s entire civil aviation fleet will be checked for airworthiness and criminal proceedings will be opened. Ukraine International Airlines said the plane in question had its last scheduled maintenance on Monday, and showed no sign of any problems prior to takeoff. The Boeing 737 went down after taking off from Imam Khomeini airport in Tehran, killing all 176 people on board.”

Read it at BBC News

and from the Daily Beast:

“Ukraine Foreign Minister Vadym Prystaiko said early Wednesday that in addition to the 63 Canadians, there were 82 Iranians, and 11 Ukrainians on board. There were also 10 Swedish, four Afghan, three German, and three British nationals.

Many of the Canadians on the flight were thought to be students heading back to university in Toronto. Ukraine International Airlines runs a popular, low-cost direct service between Kyiv and the Canadian city, which has such a high number of Iranian immigrants it is sometimes called “Tehran-to.”

“Tragic news regarding Ukraine International Airlines Flight 752. Our hearts are with the loved ones of the victims, including many Canadians,” said Canada’s foreign minister Francois-Philippe Champagne on Twitter.

It is too soon to say what caused the devastating crash but both black boxes have been recovered. Authorities in Iran have now said that despite the usual protocol for airline disasters, they would not be turning over the black box to the U.S. where Boeing is based.

That will not apparently be the case in this disaster. “We will not give the black box to the manufacturer or America,” Abedzadeh said Wednesday, which may hamper finding the cause of the crash.

Even though the plane crashed hours after Iranian missile strikes on Ain al-Asad base in Anbar province and a base in Erbil used by U.S. and allied troops hours there is no evidence to say the two events are linked.”