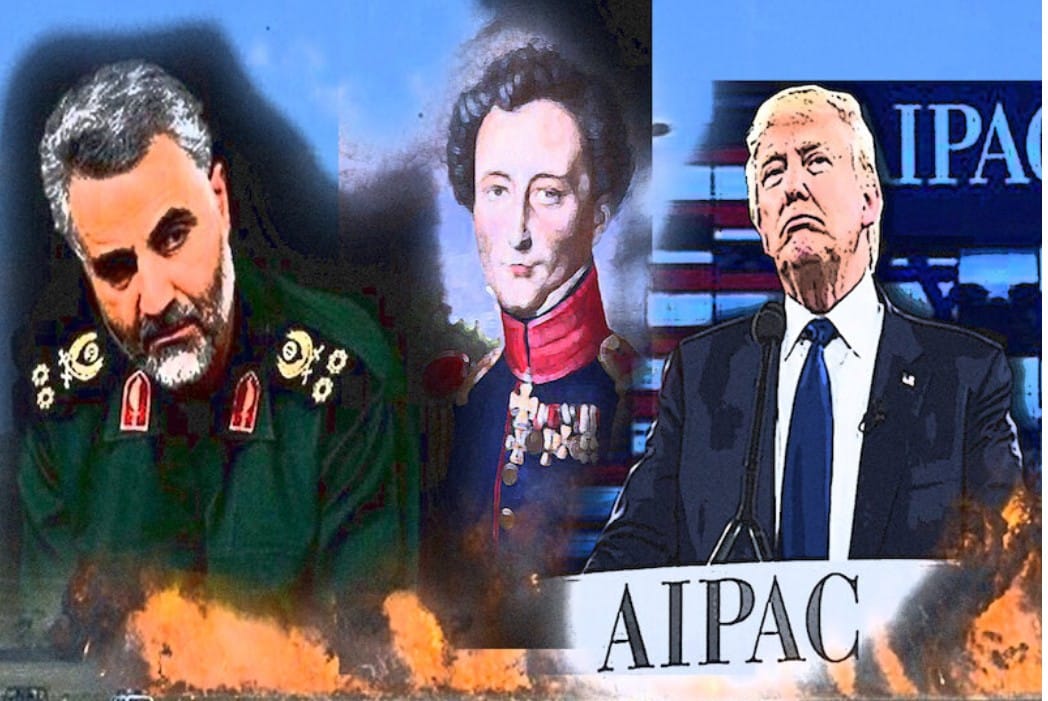 The 19th century military philosopher Carl von Clausewitz observed that war is the continuation of politics by different means. This is an apt description of Iranian military strategy and geo-political affairs. It is consistent with the rationale that guided General Qasem Soleimani for the last two decades.

As a superb military strategist Soleimani grasped that the distance between A to B isn’t necessarily identical to the distance from B to A. Iran and Israel do not share a physical border, Tehran and Tel Aviv are about 1000 miles apart. Despite Israel’s relentless threats to attack Iran, it has never been clear whether Israel has the military capacity to cause significant damage to Iran.

It isn’t clear how Israeli pilots are supposed to cover the distance and fly undetected over Jordan, Syria or Iraq. Where, or how would the Israeli plane refuel and so on.  Israel has not managed to solve this logistical military riddle.

But it has been clever enough to grasp that pushing America into an all out conflict with the Islamic Republic may provide a solution to the riddle. Despite the competition (with Britain, France and Germany), the USA is Israel’s most subservient colony. It has been happily sacrificing its sons and daughters on the Zionist altar for years.

General Soleimani devised genius military tactics to counter both American and Israeli plans; although Israel doesn’t share a border with Iran, Iran assuredly shares a border with Israel. Deploying the Iranian Revolutionary Guards alongside local pro Iran militias into areas of conflict allowed Soleimani to encircle the Jewish state within a wall of fierce resistance.

Iran’s regional allies are superbly trained, ideologically and religiously motivated and they have the benefit of the rich Iranian ballistic arsenal and technology that can deliver lethal punishment to Israel in a conflict.

For some time, Israel’s military elite and analysts  have had to accept that within the context of such an Israel Iran war, Iran together with its regional allies, is capable of raining thousands of ballistic missiles, cruise missiles and precision guided missiles on Israel. Such a development could wipe out Israeli cities in a few days.

Similar tactics were put into action by General Soleimani against American military forces in the region. Iran may not share a border with the USA but pro Iranian Iraqi militias have managed to surround and harass American forces in Iraq. Iran also dominates the most strategic passes in the Persian Gulf through its Shia militias in Yemen.

Yesterday’s Iranian attack on American air bases, showed that Iran’s supreme leaders have also internalised Clausewitz’s philosophy. The attack was measured. It was aimed at American military facilities and, according to reports, targeted runways and empty facilities.

However, the attack was conducted from Iranian territory and was openly claimed by the Iranian regime. It effectively conveyed Iranian determination and firmness. However, it was measured enough to give Trump’s Administration an opportunity to climb down off the tree it unwisely chose although it also gave the administration enough rope to hang itself if it insists on doing so.

The USA’s  conflict with Iran is peculiar; it is irrational, it may even border on madness. America is no longer dependent on the Gulf’s oil. Its general strategy in the region has been futile and self-defeating. Iraq wants the American military out.

In Syria, American forces were defeated. Russia is now taking care of what in the past America claimed to oversee and, in practice, never did. One wonders, what is it that America is doing in Iraq, or in Syria? Where is all of this leading?

Numerous academic studies have established that American foreign policy is dominated by the Israel Lobby. The devastating truth is that America has been fighting Israel’s wars for decades. Until now this has entailed fighting inferior military forces. But a battle with Iran may prove far more complicated.

Decades of sanctions have made Iran into an independent technological superpower. Iranian drone technology is at least as advanced as that of Israel and the USA and it leads in precision guided and cruise missiles. Unlike American soldiers who fight for Israel and are often fed misleading intelligence by Israeli sources,  Iranians and local Shia militias are fighting on their soil. The battle is destined to be a challenge to the USA military and its consequences are unpredictable.

Surrounded by incompetence, Trump has made disastrous decisions that have made America and Israel into the biggest dangers to world peace. The situation is so grim for America that it can’t seem to  find the power within itself to grasp its own self-imposed dark limbo.

The only way to grasp America’s bizarre operation is to accept a reverse approach to Clausewitz’ insight; American politics is a continuation of Zionist wars by different means. America has given away its world prestige for the Jewish state. American politicians shamelessly pledge allegiance to the Jewish state instead of their own. They go out of their way to appease Jewish lobby groups, whether it is the ultra Zionist AIPAC or the controlled opposition J-street.

The USA won’t be the first superpower to be destroyed by Zion. The problem is that a regional war involving America and Israel could make Extinction Rebellion irrelevant as these two destructive powers could reduce our planet to dust in order to save their current leaders from their escalating legal complications.

I have no doubt that many Americans are aware of the danger ahead. However, the matrix of Zionist power in America has dismantled Americans’ ability to call a spade a spade as that is considered ‘anti-Semitic.’

My battle for truth and freedom involves  some expensive legal services. I hope that you will consider committing to a monthly donation in whatever amount you can give. Regular contributions will enable me to avoid being pushed against a wall and to stay on top of the endless harassment by Zionist operators attempting to silence me.