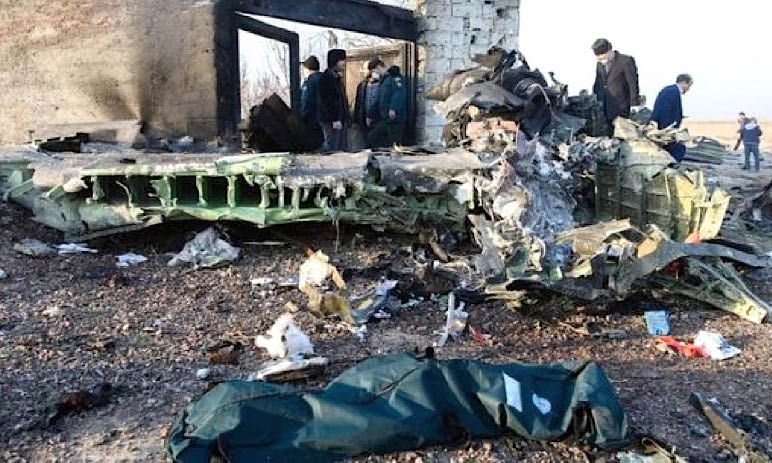 The Ukrainian passenger aircraft that recently crashed in Iran’s capital was brought down due to “human error” after flying too close to defense installations, triggering an accidental missile launch.

A military statement read on state media channels came as the first confirmation from Iranian officials that a missile, and not an engine fire, caused the crash last Wednesday. The statement noted that the shooting down was “unintentional” and maintained that those responsible would face consequences.

The statement comes after a number of conflicting press reports as to the fate of the aircraft, as well as claims from the United States and Canada that the plane was brought down by an anti-air missile strike, which Iran initially disputed, pending investigation.

In Italy on June 27, 1980 the massacre of the Itavia flight caused 81 victims. After 39 years, the hypothesis of a missile, probably launched for a mistake by a NATO jet that was fighting with a Libyan Mig, was ascertained during the civil trial but only surfaced in the criminal one against the Italian military generals who destroyed the evidence and the radar tracks, however, were acquitted for prescription of the crime.

USTICA MASSACRE: THE NATO SHADES ON US – FRENCH AIR FIGHTERS

In Ukraine on 17 July 2014 the shooting down of the Malaysia Airlines flight MH 17 bound for Kuara Lumpur from Kiev caused 268 victims and the Joint Investigative Team (mostly financed by Holland and United Kingdom) quickly closed the investigation accusing three Russians and one Ukrainian linked to the pro-Russian separatists from Donbass are responsible for launching a Soviet-made Buk missile, although the hypothesis that it was a rocket fired from a plane and not from the ground that caused the disaster is still alive.

But the Malaysian Prime Minister Mahathir Mohamad spoke negatively about the results of the investigation, reiterating how the conclusions of the investigative team led by Holland – the country that suffered the most victims in the accident – would be “politically motivated” and exploited for put Russia in a bad light. At the time, fragments were effectively found that allowed the identification of the rocket, but the dispute between Ukraine and Russia, in the midst of the Donbass civil war, was on who had that bomb among their weapons.

Today, what the Tehran authorities called a “psychological warfare” broke out in Iran about the Boeing 737 precipitate on the morning of January 8: Canada and Us president suggested that was shot down for mistake by the Iranian anti-aircraft on alert after the missile attacks made a few hours earlier against US bases in Iraq.

UIAi flight 752 crashed within minutes of departing Tehran, just hours after the Islamic Revolutionary Guard Corps fired two volleys of missiles at US targets inside Iraq, as reprisal for last week’s assassination of General Qassem Soleimani. All 176 people on board were killed, including 82 Iranians, 63 Canadians and 11 Ukrainians.

No remains of a missile have yet been found. The investigation has just started but American President Donald Trump said: «”I have my suspicions. It’s a tragic thing when I see that, it’s a tragic thing. But somebody could have made a mistake on the other side».

As reported by Fox News, BBC and Russia Today, the Pentagon does not comment. But State Department officials are blathering behind the scenes on the “ Iranian missile hypothesis” to the weekly Newsweek.

A few hours later it was the Canadian president’s turn to join the chorus of rumors that he was hit by a Russian Tor – M1 “surface-to-air” missile, from the defense system called SA-15 / Gauntlet by NATO.

“We have intelligence from multiple sources,” Trudeau said on Thursday. “The intelligence indicates that the plane was shot down by an Iranian surface-to-air missile. This may well have been unintentional.”

Tehran’s response reported in the evening by Russia Today was immediate.

“All these reports are a psychological warfare against Iran,” government spokesman Ali Rabiei said on Thursday. “All those countries whose citizens were aboard the plane can send representatives and we urge Boeing to send its representative to join the process of investigating the black box.”

Meanwhile, foreign ministry spokesman Abbas Mousavi has called on Canadian PM Justin Trudeau to share the intelligence he has claimed to have from “multiple sources” that the plane was shot down by a surface-to-air missile, state media report.

“Scientifically, it is impossible that a missile hit the Ukrainian plane, and such rumours are illogical,” Ali Abedzadeh, head of Iran’s of Civil Aviation Organization, said on Thursday, was quoted by the news agency ISNA.

“The plane, which was initially headed west to leave the airport zone, turned right following a problem and was headed back to the airport at the moment of the crash.” Mr Abedzadeh added that witnesses saw the plane “on fire” before the crash, and that pilots had not made any distress calls before trying to return to Imam Khomeini airport.

“Several domestic and foreign flights were flying in Iranian space at the same altitude of 8,000ft (2,400m). The issue of the missile’s impact on the aircraft cannot be true in any way,” he said. Mr Abedzadeh said the initial findings had been sent to Ukraine and the US, where Boeing has its headquarters.

In support of the missile hypothesis there is a CBS report.

«Before Mr Trudeau’s remarks, CBS published a brief report on Twitter. It said this information was based on US intelligence, which sources said picked up signals of a radar being turned on – highlights BBC – US satellites also reportedly detected two missile launches shortly before the Ukrainian plane exploded».

Instead, to have many doubts about this disturbing new hypothesis. on the Iranian missile launched for mistake, are both the Ukrainian delegate sent on the spot and an expert analyst quoted by the BBC, interested in following the case as Prime Minister Boris Johnson for the three British killed on the flight.

Earlier on Thursday, Oleksiy Danylov, the secretary of Ukraine’s security and defence council, said in a Facebook post (in Ukrainian) that three other possible crash causes were being considered: a mid-air collision with a drone or other flying object, engine destruction/explosion due to technical reasons, an explosion inside the plane as a result of a terror attack.

Mr Danylov said Ukrainian investigators, who are already in Iran, wanted to search for possible debris from a missile at the site of the crash. But at the moment there is no news that they have found remains useful for the investigation.

«A pattern of disturbing indications is emerging suggesting that Flight PS752 may well have been shot down by mistake by Iran’s own air defences – wrote for BBC Jonathan Marcus defense analist – While it is not unprecedented for air defence systems in conflict zones to shoot down airliners, this would be an extraordinary error».

«The aircraft had only just taken off from an international airport; it was a scheduled flight; and it should easily have been recognisable – added – However, precisely what the operators of the Russian-supplied, Soviet-era Tor – or SA-15/Gauntlet system as it is known by Nato – would have seen is unclear».

A very serious error caused the shooting down of an airplane on September 17, 2018 in Syria. As that time the anti-aircraft of the Russian-made S-200 systems was operated by Damascus by mistake targeting a Moscow Ilyushin 20 military reconnaissance aircraft: was shot down causing the 15 crew members to die.

read more IL-30 SHOT DOWN FOR MISTAKE IN SYRIA

But on that occasion it happened in the midst of an air conflict after the attack by the F-16 of the Israel Defense Forces who bombed some Hezbollah positions in Syria hiding behind scheduled flights so as not to be intercepted by the defense systems. Confirming that, as argued by the expert Marcus, a civilian aircraft is easily identifiable.

Therefore, all the hypotheses of the Kiev envoy remain open