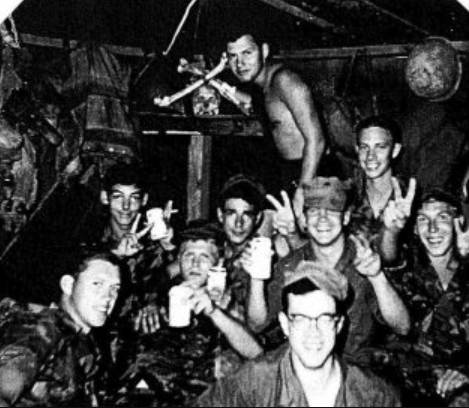 American veterans, and it has always been the case, are used by the military industrial complex to justify wars. You can still find someone serving in the Middle East, on battlefields where you could take your kids on vacation, no German “88s” here, who whine like they had just landed on the bloody sands of Tarawa.

Iraq was a hellhole, 2004, then again in 2007 and 2008, not Vietnam but let’s also remember, that was a huge long time ago. Let’s not be hearing from Special Operations guys who tourist around with the Kurds, whose real days are filled with safety and utter ease, play fake hero in service of the scamsters that are bleeding America dry.

The dance ended a long time ago…and we can never take care of those who needed it because the phony “after the dance” gang is sucking down, not just the funding but the credit as well.

The war has been over for more than a decade.  The last low intensity (which can still kill you) combat for Americans was more than 11 years ago.  Everything since has been police work, occupation, time wasting and clearly done for a paycheck.

When I entered the Marine Corps in 1968 it was clear to me that Vietnam wasn’t Guadalcanal or the Battle of the Bulge.  When I got there, I found some days like the movies but most not.  You see, all “reality” then and now came from movies.

Still, in Vietnam pay was low, nothing, but the war was fun to watch, providing you were one of the very very few who actually got close enough to see it.

Afghanistan can kill you but as wars, it has always been “occupation,” and never prolonged combat.  In fact, no War on Terror “battlefield” has been prolonged combat, the kind with no food, no water, surrounded, bayonets, fighting to the last man, the stuff of Vietnam.

But then, riding in a vehicle after leaving the dinner table, fattened on 5 courses with a huge paycheck, you can still get blown up and that happened to many, so very many.

For those who fought in Vietnam, which is 9% of those who served in Vietnam, pay was as low as $16 a week, which was paper route money then.  Hot meals were zero, medical care primitive and KIA rates ran 44%, 400% of those serving in World War II.

But that war was 50 years ago and the sick need some have to hold on to fake glory in order to suck down phony honor, even for real combat vets…those few are alive anymore…is sad to see.

As for today’s military, let’s face it, we are not at war.  Also, though pay isn’t bank president money, imagine working for $350 a month, which is the equivalent, adjusted for inflation, of what we got.

As a veteran, you have no job selling war.  You do owe your friends, those you served with and your country, a debt you can pay by outing fakery, outing phony war, outing hypocrisy and by refusing to back political leaders who, even when rare ones serve in the military, did so as highly protected “ring klinkers” like Pompeo, Rumsfeld, Esper and so many others.

For those of you who found yourselves in major combat, maimed, in senseless minor wars started in order to scam taxpayers and steal oil, time to grow up and face the truth.

As a Vietnam vet, it was clear from day one, I was taking it in the ass.

You can also do this, for a variety of reasons…tell your stories.  If you didn’t kill kids or torture the wounded, and Americans tend to be pretty good people despite what others say, then tell us about it.

Get it behind you, get it in focus.  Also, be willing to accept you were lied to and exploited.  In that, you have brothers and sisters, so many of us.

We are here to welcome you.