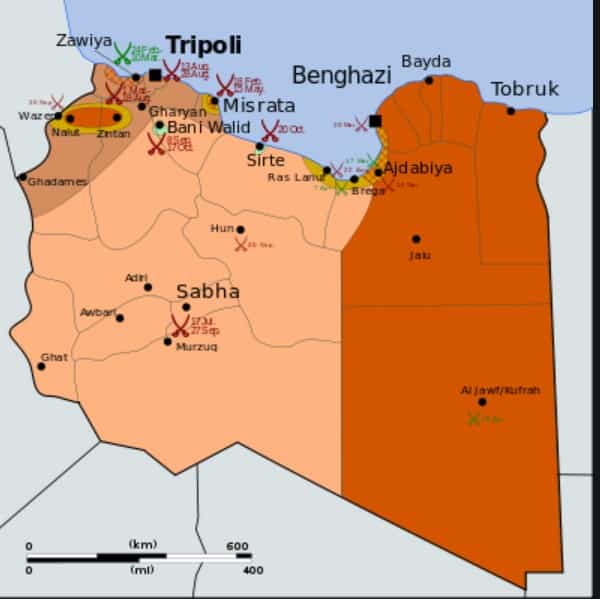 The end of Western hegemony in international relations is becoming increasingly apparent. As in Syria, Turkey and Russia have now agreed on a way to achieve peace between the parties to the conflict in Libya beyond Western power politics.

During their meeting on Wednesday, Russian President Vladimir Putin and his Turkish counterpart Recep Tayyip Erdoğan agreed to call on the parties to the conflict in the Libyan civil war to call for a ceasefire from Sunday. In the runup to the meeting, an important advisor to the Turkish president, Ömer Çelik, had already stated that a confrontation between Russia and Turkey in Libya, often conjured up by Western media, was out of the question.

With the ceasefire, Turkey secures the continued existence of the internationally recognized government in Tripoli, in which the Muslim Brotherhood dominates and which is supported by Turkey. The troops of the counter government, based in Tobruk, have been advancing in recent months and now control a large part of the country. Russia has so far pursued a cautious policy of non-interference, although last year Moscow held talks with the Libyan commander Chalifa Haftar, who is behind the counter government.

When a Russian-Turkish reconciliation began to take shape in Libya, the Western powers suddenly became alarmed. Unexpectedly, completely new tones could be heard from the capitals of Europe: German Foreign Minister Heiko Maas warned against foreign interference in the Libyan conflict. On Tuesday one day before the meeting between Putin and Erdoğan – he drafted a joint statement with the foreign ministers of France, Italy and the UK and the EU foreign affairs commissioner, in which they condemned the “continuing interference from outside” and described it as “detrimental to the national interests of the country”.

The critical observer will, of course, ask himself whether this was perhaps meant as a late, indirect admission that the NATO mission against the Libyan state in 2011, which made the civil war possible in the first place, was wrong.

But no: This admonition is of course not directed at the Western powers, who can never do anything wrong, but at the (in the Western narrative) rogue of international politics, namely Russia. How then can Moscow, too, dare to strive for a genuine, sustainable peace (on the basis of the UN Charter and international law in general) with a subaltern state like Turkey, a state that since the fall of the Ottoman Empire has been condemned to do the dirty work of the Western powers?

But it is too late for the Western powers (as in Syria): they have gambled away their influence through a false power politics based on aggression. Instead of respecting international law and rejecting unilateralism, they have behaved like daredevils in Syria as in Libya (and as before in Iraq and Yugoslavia) and trampled the basic norms of the international order (respect for state sovereignty, non-interference in the affairs of other states, abstinence from violence).

More and more states are realizing that the promise of the Western, so-called liberal world is an illusion – because it is liberal only for those who, like mindless automatons, submit to the will of the powerful. Those who insist on their right to self-determination are declared outlaws as pariahs.

This shameful chapter of human history is now gradually drawing to a close. The Russian-Turkish declaration is another important milestone in the establishment of a multipolar world, which coincides with a democratisation of international politics. At the same time, this process marks the relative loss of power of the Western states.

As in the Syrian conflict, where the Astana process has led to a peace process that eludes Western hegemony, real peace now (finally!) appears to be in sight for Libya. Of course, these processes are not free of conflict either in Syria or Libya. There is not a single truly historic act under the sun that has gone without contradiction. Due to ideological blindness and the negative influence of Western hegemony, Ankara too often tends to rely on aggression and interference contrary to international law instead of diplomacy.

But: Independent of the subjective wishes of Turkish policy-makers, Turkey is becoming increasingly integrated into the anti-hegemonic pole around Russia and China, which advocates respect for international law and mutually beneficial relations in international politics. This is an objective process that is difficult to reverse and is based on fundamental economic and geopolitical developments that will be essential for the 21st century. It is a process that promises hope for all those who see themselves as seeking peace and progress.

RT Deutsch endeavours to cover a broad spectrum of opinions. Guest contributions and opinion articles do not have to reflect the views of the editors.