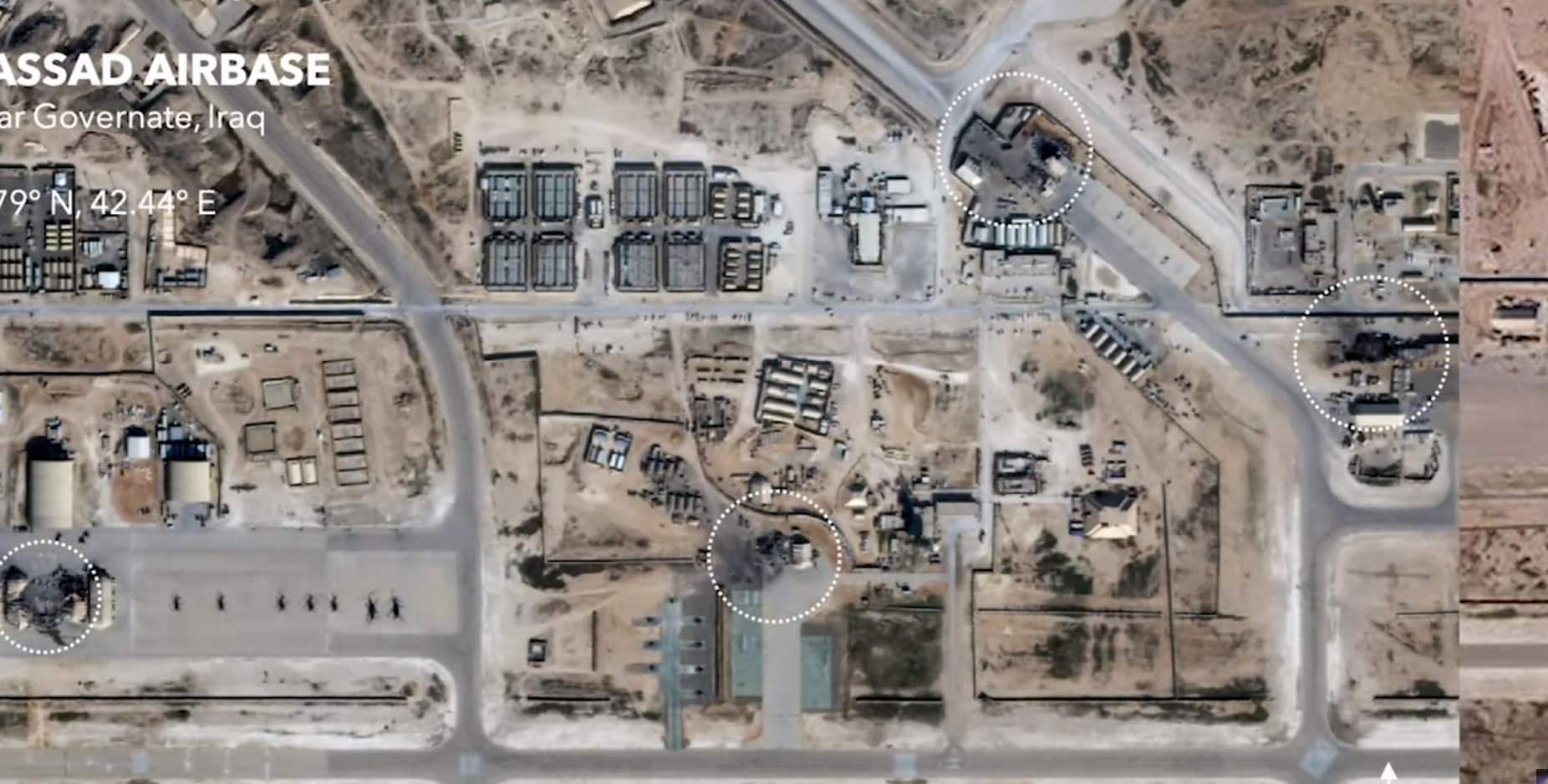 VT editor Jim Hanke was in charge of POW recovery efforts in Thailand after the Vietnam War.  I met with Jim and a team member, SF Sgt Major, in Las Vegas a few months ago.  We talked about POW issues and, of course, the effort by John McCain and others, including John Kerry and the Pentagon to lie to the American public.

Hanke got lots of confirmation live POWs were out there into the 1980s, reports that were classified and buried and are still hidden from the public.  These aren’t a few, and they aren’t unreliable, this is top level intelligence including from American military sources.

We never believe anything out of Washington or the Pentagon, particularly when American lives are involved.  The West Point boys hate our troops far more than the Taliban does.

The US said Erbil wasn’t hit.

Satellite photos show significant damage to Assad Air Base in Iraq by extremely accurate and far more dangerous weapons than Donald Trump was told about.

Trump’s response has sent a shock around the world and nobody believes he has suddenly become sane.  Israel and Saudi Arabia, his masters, are terrified yet the American press has him now as a voice of sanity.  The truth is simple, Americans took a beating because a corrupt American president walked them into it.

Then he did nothing because Israel and Saudi Arabia, who were testing Iran’s resolve, learned, at the hands of possible and likely American dead and wounded, that Iran can obliterate them.

Any defense expert has known this all along, any and every real expert.  None are in Washington and none are among Trump’s cabal of ass kissers.

Pandora’s box is open.  The emperor has no clothes?  A stitch in time….

As a real news agency, we have had to actually call up friends in Iraq to start sniffing out the veil of lies Trump has put out again.  Nothing he ever says can be believed, not that unusual for a politician but to lie this much, for a president, is a disaster.

His base are now only the wealthy, which is some of us at VT heaven forbid, and the mentally deficient.

Here is what we have thus far:

Al Assad Air base is 20% destroyed with one F35 and possibly 2 destroyed, one Apache destroyed and others damaged and key materiel storage buildings, many, direct hits.  Probable casualties aren’t 80 but if I were told 5 died and 12 wounded, and these are approximate figures, figuring advance warning, they would seem reasonable based on assessment.

You can’t hide from missiles, they will kill you in a shelter and these were the kinds of weapons we never saw in Vietnam, large warheads and lots of inertia, comparable to the hit of a German V2.

America lied about casualties in every war and lied about POWs as well.  We are missing 1,205 from Vietnam, written off until 1993, then secretly searched for in a compact between Clinton and Yeltsin.  I was part of that effort, spurred on by Czech General Jan Senja.

HEARINGS RECENTLY HELD BY CONGRESSMAN BOB DORNAN, ONCE AGAIN FOCUSED ATTENTION ON THE FACT THAT AMERICAN PRISONERS OF WAR, FROM THE KOREAN WAR AND MOST PROBABLY FROM THE VIETNAM WAR, WERE MOVED TO THE FORMER SOVIET UNION.

TESTIMONY BY COL. PHILIP CORSO, FORMER MILITARY ADVISER TO PRESIDENT DWIGHT EISENHOWER AND CZECH DEFECTOR AND CURRENT DEPT. OF DEFENSE EMPLOYEE JAN SENJA, LEAVES NO DOUBT THAT HUNDREDS AND POSSIBLY THOUSANDS OF AMERICAN POW’S WERE ABANDONED AT THE END OF THE KOREAN WAR.

IN HIS TESTIMONY COL. CORSO STATED: “IN THE PAST I HAVE TRIED TO TELL CONGRESS THE FACT THAT IN 1953, 500 SICK AND WOUNDED AMERICAN PRISONERS WERE WITHIN 10 MILES OF THE PRISONER EXCHANGE POINT AT PANMUNJON AND WERE NEVER EXCHANGED.”

COL. CORSO’S TESTIMONY WAS BACKED UP BY NEWLY DECLASSIFIED DOCUMENTS SHOWING THAT THE PENTAGON KNEW, IN 1953, MORE THAN 900 POWS WERE HELD BUT NOT RELEASED BY NORTH KOREA.

ACCORDING TO COL. CORSO, “SUBSEQUENT INFORMATION INDICATED THAT THEY ALL DIED AFTERWARDS.” A DEC. 22, 1953 MEMO STATES THAT THE ARMY WAS INQUIRING ABOUT THE DISAPPEARANCE, FROM A CAMP OF 610 ARMY AND 300 AIR FORCE POWS, BEFORE THE POW EXCHANGE. THIS INFORMATION SEEMS TO BACK UP COL. CORSO’S TESTIMONY.

IN 1968 CZECH GENERAL JAN SENJA DEFECTED TO THE UNITED STATES. HE BROUGHT WITH HIM STARTLING INFORMATION ON AMERICAN POWS FROM BOTH THE KOREAN AND VIETNAM WARS. ACCORDING TO GENERAL SENJA, POW WERE HELD BACK AT THE END OF THE WAR IN KOREA. SOME WERE MOVED TO THE FORMER SOVIET UNION AND SOME WERE USED IN GHASTLY MEDICAL EXPERIMENTATION, RIVALING HITLERS’ NAZI GERMANY.

GENERAL SENJA ALSO CONFIRMED A LONG HELD SUSPICION THAT SOME POWS FROM THE VIETNAM WAR WERE MOVED TO COMMUNIST EASTERN BLOC COUNTRIES.

“THE POWS WERE USED AS BODIES FOR TRAINING MILITARY DOCTORS IN FIELD MEDICINE — FOR EXAMPLE TREATING SERIOUS WOUNDS AND CONDUCTING AMPUTATIONS.”

“THE SOVIETS ALSO USED THE AMERICAN PRISONERS TO TEST THE PHYSIOLOGICAL AND PSYCHOLOGICAL ENDURANCE OF AMERICAN SOLDIERS. THEY WERE ALSO USED TO TEST VARIOUS MIND CONTROLS.”

“AT THE END OF THE KOREAN WAR, THERE WERE ABOUT 100 POWS WHO WERE STILL CONSIDERED USEFUL FOR FURTHER EXPERIMENTS. I BELIEVE ALL OTHERS HAD BEEN KILLED IN THE PROCESS OF THE EXPERIMENTS BECAUSE I DO NOT RECALL EVER READING ANY REPORTS THAT INDICATED THAT ANY OF THE POW PATIENTS AT THE HOSPITAL LEFT THE HOSPITAL ALIVE — EXCEPT THE 100 THAT WERE STILL ALIVE AT THE END OF THE WAR. THESE 100 WERE FLOWN IN FOUR GROUPS FIRST TO CZECHOSLOVAKIA, WHERE THEY WERE GIVEN PHYSICAL EXAMS, AND THEN ONTO THE SOVIET UNION…..”

“… I PERSONALLY WAS PRESENT WHEN AMERICAN POWS WERE UNLOADED FROM PLANES, PUT ON BUSES WHOSE WINDOWS HAD BEEN PAINTED BLACK, AND THEN DRIVEN TO PRAGUE WHERE THEY WERE PLACED IN VARIOUS MILITARY INTELLIGENCE BARRACKS AND OTHER SECURE BUILDINGS UNTIL THEY WERE SHIPPED TO THE SOVIET UNION.”

BETWEEN 1961 AND 1968 WHEN I LEFT CZECHOSLOVAKIA, I WOULD ESTIMATE AT LEAST 200 AMERICAN POWS WERE SHIPPED TO THE SOVIET UNION THROUGH CZECHOSLOVAKIA.”

ACCORDING TO AN ASSOCIATED PRESS REPORT, DATED SEPT. 1996, RUSSIAN MILITARY SPOKESMAN MIKHAIL DEMURIN DENIED USING KOREAN AND VIETNAM WAR POWS AS HUMAN GUINEA PIGS MR. DEMURIN ALSO STATED THAT NO POW’S WERE EVER TAKEN TO THE FORMER SOVIET UNION. THE FOLLOWING IS EXCERPTED FROM THE AP ARTICLE.

” Ministry spokesman Mikhail Demurin denied assertions by Jan Sejna, a former Czech general who defected to the United States in 1968, that he was involved in transferring American POWs from Vietnam to the Soviet Union, according to the Interfax news agency…”.

“Demurin said a joint U.S./Russian commission has examined hundreds of Korean War-era POW cases and found no evidence that prisoners were ever in the Soviet Union. He also said Vietnam War documents “do not suggest that American POWs were taken out of Vietnam.”