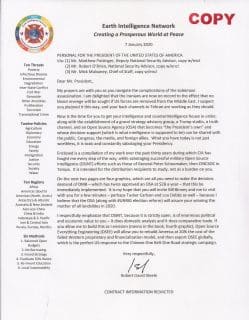 PERSONAL FOR THE PRESIDENT OF THE UNITED STATES OF AMERICA

My prayers are with you as you navigate the complications of the Soleimani assassination. I am delighted that the Iranians are now on record to the effect that no blood revenge will be sought if US forces are removed from the Middle East. I suspect you planned it this way, and your back channels to Tehran are working as they should.

Now is the time for you to get your intelligence and counterintelligence house in order, along with the establishment of a grand strategy advisory group, a Trump studio, a truth channel, and an Open Source Agency (OSA) that becomes “the President’s own” and whose decision-support (which is what intelligence is supposed to be) can be shared with the public, Congress, the media, and foreign allies.  What you have today is not just worthless, it is toxic and constantly sabotaging your Presidency.

Enclosed is a compilation of my work over the past thirty years during which CIA has fought me every step of the way, while sabotaging successful military Open Source Intelligence (OSINT) efforts such as those of General Peter Schoomaker, then CINCSOC in Tampa.  It is intended for the distribution recipients to study, not as a burden on you.

On the next two pages are four graphics, which are all you need to make the decision: demand of OMB – which has twice approved an OSA at $2B a year – that this is immediately implemented.  It is my hope that you will invite Bill Binney and me to visit with you for a few minutes – perhaps Tucker Carlson and Lou Dobbs as well – because I believe that the OSA (along with #UNRIG election reform) will assure you’re winning the mother of all landslides in 2020.

I respectfully emphasize that OSINT, because it is strictly open, is of enormous political and economic value to you – it does domestic analysis and it does comparative trade. If you allow me to build this as I envision (memo in the book, fourth graphic), Open Source Everything Engineering (OSEE) will allow you to rebuild America at 20% the cost of the failed Western proprietary and financialization model, and then export OSEE globally, which is the perfect US response to the Chinese One Belt One Road strategic campaign. 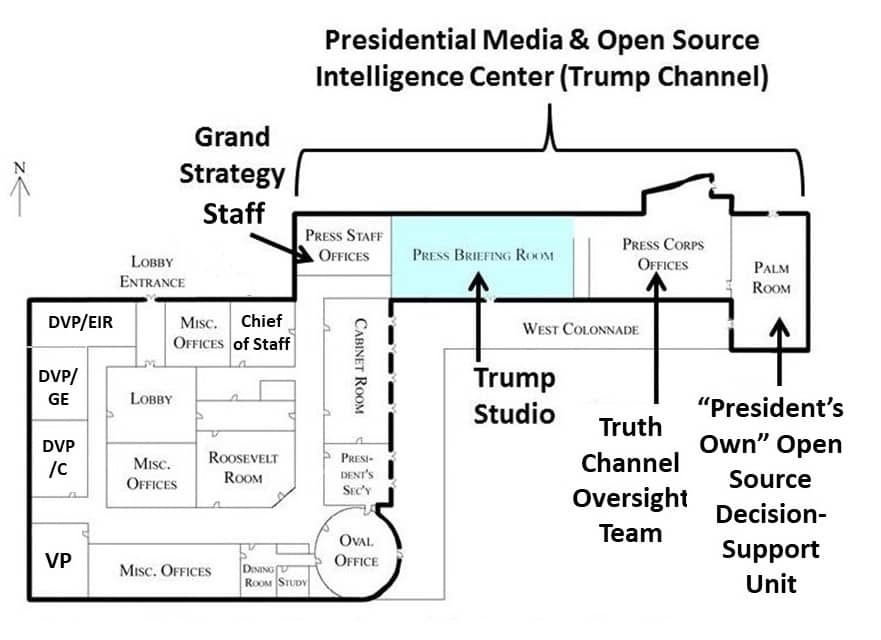 DISTRIBUTION (EACH WITH ENCLOSURE):

From 1989 to 2019 — for 30 years — the author, himself a former CIA spy and Marine Corps intelligence officer as well as the senior civilian responsible for creating the Marine Corps Intelligence Activity (MCIA), has sought to reform U.S. Intelligence.

The secret world costs the U.S. taxpayer over $100 billion a year, and yet, according to General Tony Zinni, USMC (then Commanding General of the U.S. Central Command engaged in two wars and twelve joint task for actions) provides “at best” 4% of what a major commander needs (to which one can add, and nothing for everyone else.

This book of readings provides all that is required to reform U.S. intelligence so that it might honor the Constitution and serve the President, the Cabinet, the Congress, and the public.

There is both evolution and repetition from one piece to the next. Highlights include the 1989 call for reform by the Commandant of the Marine Corps (ghost-written by the author); 1993 talking points delivered to the Director of Central Intelligence; a 2004 standing room only lecture to the Department of State; a 2007 standing room only lecture to Amazon; a 2009 briefing to the Undersecretary of Defense for Intelligence; the 2013 seminal chapter on the evolving craft of intelligence leaving behind secret war and strategic secret analysis to focus on creating Smart Nations full of citizen intelligence minutemen; a 2014 indictment of defense intelligence hand-delivered to the home of the Secretary of Defense; and the 2017 Memorandum for the President of the United States of America.

Everything in this book of readings is common sense and in the public interest. The fact that these ideas have been censored, marginalized, and actively repressed for 30 years tells us all we need to know about the relationship of the US secret intelligence community to the Deep State.

President Donald Trump appears to understand that radical change is required. The author — and his NSA counterpart William Binney — have stated publicly that we should be moving toward a reduction of the secret intelligence budget by up to 70%; consolidation of the surviving pieces in a restored Central Intelligence Agency (abolishing the Office of the Director of National Intelligence), and the creation of an Open Source Agency to serve as “the President’s Own” decision-support element with the added advantage that its findings are never secret and can always be shared with Congress and the public.

We do not lack for intelligence in the United States of America. We lack integrity.