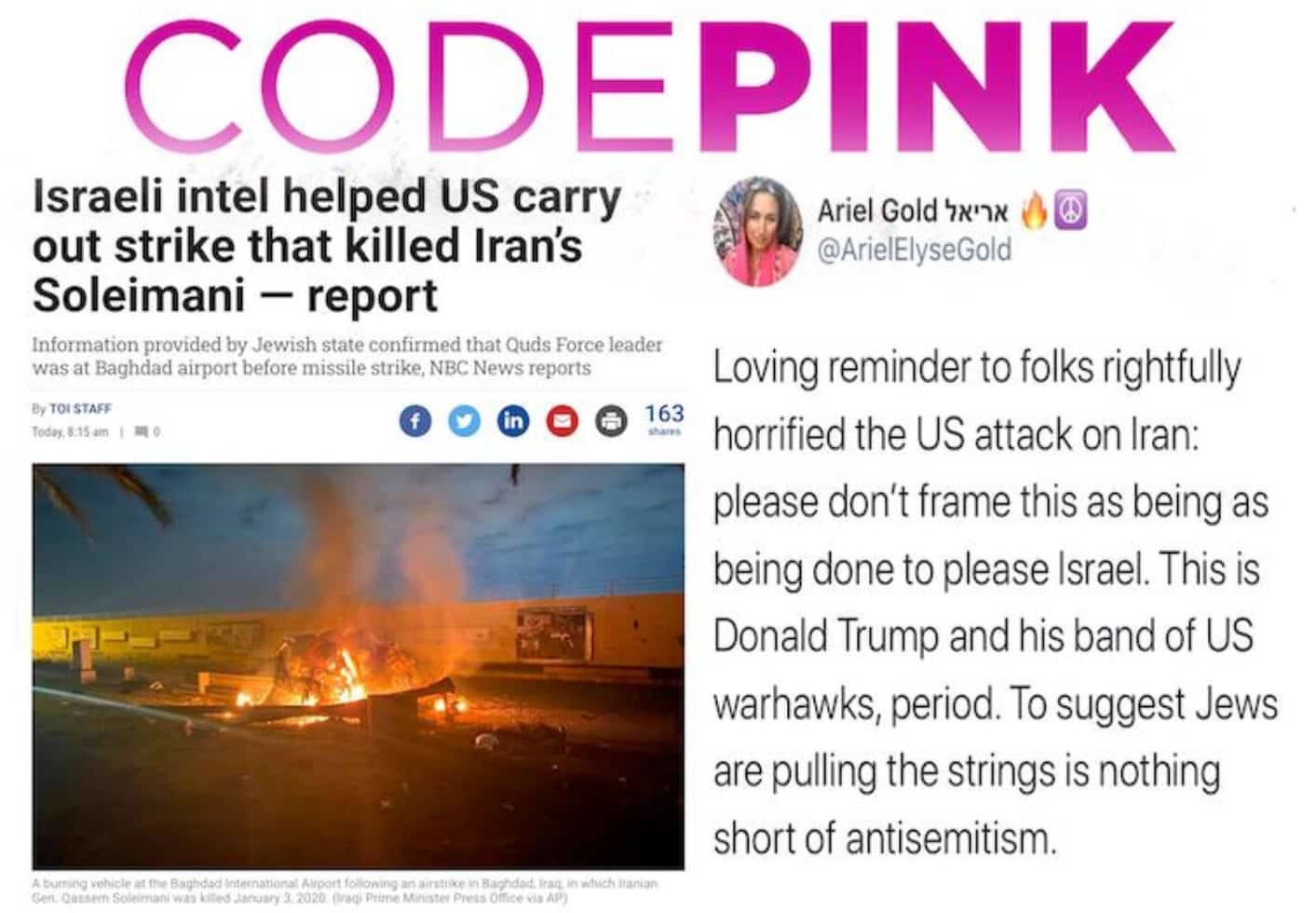 by Gilad Atzmon for VT

Ariel Gold is the national co-director of CODEPINK, an American female  “grassroots peace and social justice movement” that claims to  work “to end U.S.-funded wars and occupations.” Ariel claims to support the Palestinians and oppose Israel.

She has published articles in Jewish progressive outlets such as the Forward, Tikkun Magazine and Mondoweiss.

On January 3rd, just a few hours after the world became aware of the assassination of Iranian General Qasem Soleimani by an American drone attack,  Ariel, the so-called ‘Jewish dissenter’ rushed to post the following tweet:

“Loving reminder to folks rightfully horrified the US attack on Iran: please don’t frame this as being done to please Israel. This is Donald Trump and his band of US war hawks, period.

To suggest Jews are pulling the strings is nothing short of anti-semitism.”

Loving reminder to folks rightfully horrified the US attack on Iran: please don’t frame this as being as being done to please Israel. This is Donald Trump and his band of US warhawks, period. To suggest Jews are pulling the strings is nothing short of antisemitism.

385 people are talking about this

The Jewish progressive activist basically insisted that any such criticism of  Israel was ‘antisemitism.’ She was also naive to prematurely vindicate the Jewish State of involvement in the unlawful assassination: a crime that may lead to unpredictable and lethal consequences in the near future.

Today’s news reports that Israel was deeply involved in the targeted assassination of the Iranian general. The Times of Israel ‘s headline this morning reads:

“Israeli intel helped the US carry out the strike that killed Iran’s Soleimani.” The article states that “Information provided by Jewish state confirmed that Quds Force leader was at Baghdad airport before the missile strike, NBC News reports.”

Amongst my sins is the argument I have made for almost two decades:

for the solidarity and peace movements to be genuine, functional and effective they must be emancipated from the grip of the so-called Jewish progressives. As things stand at the moment, solidarity with the oppressed is restricted by the sensitivities of the oppressor.

Author Note:  My battle for truth and freedom involves some expensive legal services. I hope that you will consider committing to a monthly donation in whatever amount you can give. Regular contributions will enable me to avoid being pushed against a wall and to stay on top of the endless harassment by Zionist operators attempting to silence me.