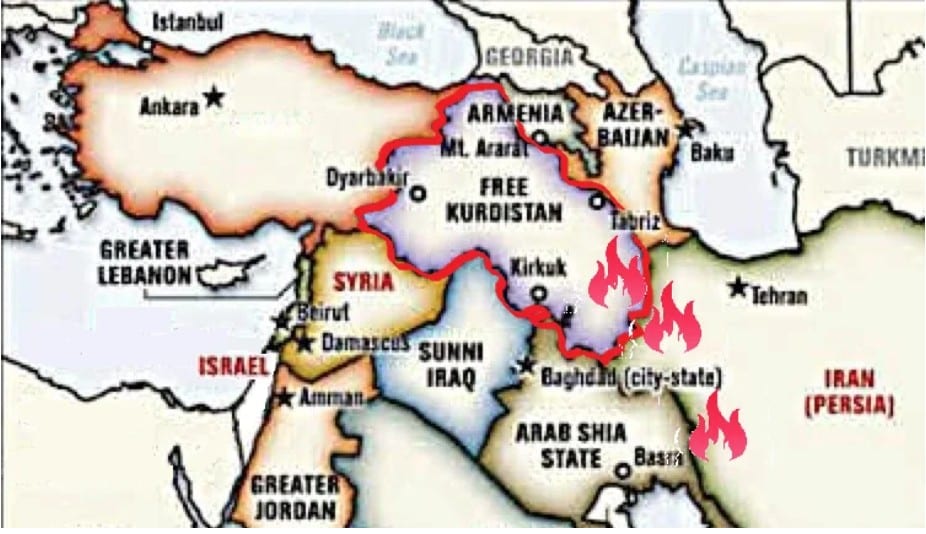 The map above reflects the findings of Russian intelligence, their allies in the US who have totally infiltrated AIPAC/ADL and their cyber intelligence capability.

There is an opening here, one for Israel, now faced with Iranian supremacy over Saudi Arabia and the Gulf States and something more sinister, a large scale US withdrawal from Asia, done by “dark of night.”

America’s carriers are at “station CONUS,” and the air war against ISIS, a Western intel agency proxy force (everyone knows this by now) involves pure drones, no aircraft at all.

Then we have Trump’s bizarre oil theft pronouncements, they went over like a lead balloon. This was said for Europe, of course, quite purposefully, to show them how insane he is. Trump’s policies are based on Chaos Theory, and acting crazy is a part of it.

Everyone knows that as well but, as Trump policies almost universally end up in the toilet, the feigned insanity is suspected to be quite real. Putin, however, is still in Trump’s camp but none of us are privy to why.  The video below (no sound) is from a January 7, 2020 meeting in Damascus.

Where peace could be “around the corner” with Israel and Syria setting up an economic trade corridor and Syria again leveraging Hezbollah, a rudimentary “divide and conquer” plan has instead been put into action by the Deep State.

Whatever one thinks of Trump, not everyone but everyone that counts knows that Trump is surrounded by Christian occultists, Pompeo, Esper, Bolton (gone but not forgotten) and 3 dozen others plus key Senate GOP leaders.

They are now controlling Trump along with Nancy Pelosi, keeping impeachment on the table while plans move forward, dancing 6 “safe” GOP senators as potential “swing votes” on impeachment.  Yes, Pelosi is fully engaged with them, and what the papers report is pure theatre for “rubes.”

Outlined below is what the Russians believe and what they say is true.

It is what we are seeing as events play out as well, that destabilizing Turkey is paramount and that the war on Iran is fake, fake, fake…

Consider this, the US is currently trying to destabilize Iran after the Ukrainian airliner shootdown and subsequent demonstration while the government is buoyed by its successful attack on two American bases. A lot of questions there as to an aspect of theatricality as well.

What is clear is that Israel and the US depend deeply on the Kurds as surrogates, which I believe is a huge mistake.  I know most of the Kurdish leaders personally and have great affection for the Kurdish people.  They are not going to fight for America and Israel, not after decades of being betrayed and devastated, more than once at the hands of lying American leaders.  They aren’t stupid.

Where Russia fails, I believe, is in underestimating the sea change in Washington from simple corruption to endemic insanity driven by the Talibanization of Evangelical Christianity by sects more aptly described as “Luciferian.”

Were one to trace the deluge of drivel, QAnon and One America Network, plus dozens of similar sources Trump adheres to, not simply “unbalanced and unsound” but driven by wild fantasy, a mythology for the ignorant and fearful, deeply rooted, homicidally focused, it is easy to surmise how events can spin out of control.  From Russia:

The plan of Israel and the United States to eliminate Turkey is becoming more and more clear. The leadership in promoting this project belongs to Israel by all means. Until recently, the United States was holding back the Jewish lobby in Washington as best they could, offering compromise options, but after the failure of the CIA operation to replace the odious Turkish president with a more loyal one, they ceded to Israel.

It is in the interest of Israel to eliminate the support of the Palestinians who are waging an irreconcilable war against the Jewish state and, on the whole, weaken all Middle East states, except Israel, without exception. Palestine (including Jordan) receives support from Iran, Turkey, and Saudi Arabia. The United States has leverage over Saudi Arabia. Iran is “out of the game” is drawn into a full-blown and lengthy war with Kurdistan. 20% of the population of Iran are Kurds and peoples close to them. Turkey, as conceived by Massad’s strategists, should simply disappear from the world map.

The first stage of this plan: Turkey’s withdrawal from NATO, followed by the withdrawal of US military bases and nuclear weapons from Turkey. This step has already begun.

In the second stage, the US will try to drag Russia into the conflict, pushing Erdogan to attack the Russian troops in Syria. In the third stage, Greece and Armenia will be involved, as the long-standing antagonists of Turkey.