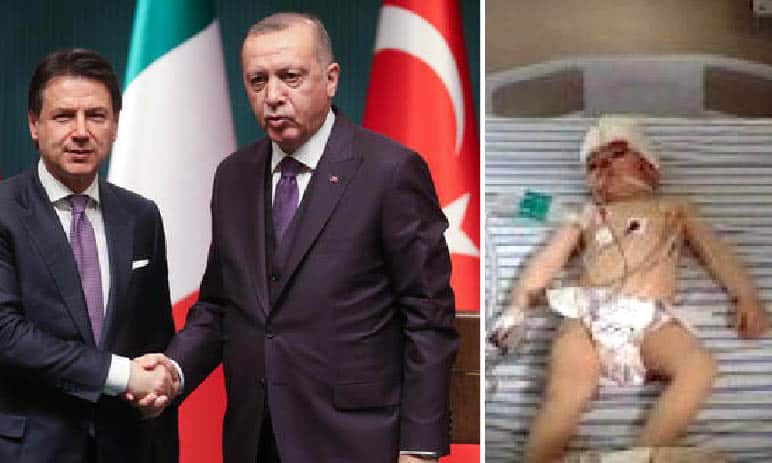 In my life I have never been an expert in diplomacy: especially when there are thousands of killed dead in the middle, many of them children.

It is probably for this reason that I don’t trust in Turkish President Recep Tayyip Erdogan and I have not hesitated to call him several times “Islamic dictator” after the tenth or fifteenth report on Turkey’s complicity with the Al Nusra quaedist terrorists, now Hayat Tahrir al-Sham (HTS), and with the ISIS jihadists, you will incarcerate in the “amazing” Turkish prison only to be forcibly recruited and then freed under the direction of the powerful intelligence of Ankara MIT (Millî İstihbarat Teşkilâtı – national information organization).

Italian PM Giuseppe Conte should know these things well, being at the top of the president of the Information System for the security of the Republic to which the many and branched Italian intelligence bodies belong.

How should he be aware of suspicious flights departing from Belgium through an Arab-Moldavian cargo charter company, reported by Gospa News, which have repeatedly shuttled between Istanbul, Ostend and Misrata, Libya, on the days when Erdogan sent the jihadists $ 2,000 a month paid to support Fayez Al Sarraj and his National Agreement Government in Tripoli.

Libya: after jihadists Turkey sends weapons. Suspect flights from Belgium for Moldovian-Arab cargo. And Us one too

Conte should also know and remember the hundreds of times the Turkish president agreed on a ceasefire for the stronghold of the Syrian pseudo-rebels, actually Qaedists from HTS, in the Idlib province. The last was signed by Erdogan in recent days with Russian President Vladimir Putin who then wanted the truce to start at 00 on Sunday 12 January just like the one defined for Libya, repeatedly violated although only with small occasional attacks by both set off.

In his great magnanimity, the Tsar of Moscow has let believe that it was the mediations of the Italian Prime Minister that achieved this minimum result, achieved and disregarded, after hours, days or months in Tripolitania numerous times in recent years, even before on the shores of the Mediterranean in front of Italy there was the landing of a thousand, this time in Tripoli and not in Marsala, this time jihadists and non-Garibaldian Masons.

And so while the ceasefire on the Libyan coast remains hanging by a thread, from which the Greenstream gas pipeline for Sicily built in the good old days when Muhammar Gheddafi was standing, while Conte is the pantomime of a statesman shaking hands with the president Turkish in search of mediation for the fate of Tripoli, in Aleppo the truce continues to crack, for those same rockets launched by the usual Islamic terrorists coordinated, trained, armed and financed by Turkey.

«A source in the Aleppo police command told the SANA reporter Sunday that terrorist groups positioned in the western suburbs and north-western countryside of the city of Aleppo have launched a number of rockets against the residential neighborhoods of Masaken al-Sabeel, Tishreen. Street, al-Shahbaa al -Jadideh, al-Khaldiyeh and al-Nile Street. The source added that the terrorist attacks caused the martyrdom of three civilians and the injury of three, including two children, when they were hospitalized».

his is the brief communication from the Syrian Arab News Agency in Damascus which is widely confirmed by SOHR, the Syrian Observatory for Human Rights.

«The activists of the Observatory have documented the killing of three citizens after the launch of missiles by jihadist groups. The death toll could increase due to the presence of five injured, including two children». 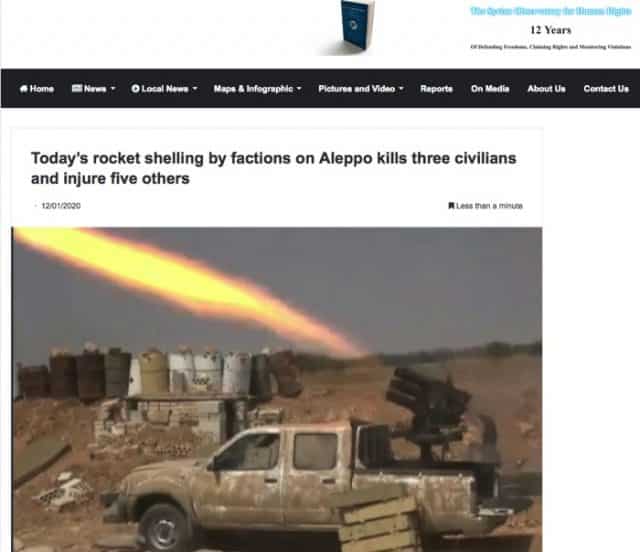 The same organization, always hostile to Syrian President Bashar Al Assad but also to pro-Turkish mercenaries who continue to massacre the Kurds in Afrin in the Olive Branch operation of Ankara, as well as communicating the violation of the truce by extremist Islamic terrorists, with the consequent inevitable response of the Syrian army, reports that the helicopters of the government troops have launched flyers to invite the inhabitants to flee the area and go to the humanitarian corridors under the control of the Russian troops in Al-Hbit, Abu Al-Duhur and Al-Hader.

«Terrorist organizations are trying to take you as human shields to prevent the advancement of army units that are coming to save you and free your areas from terrorist killers. The decision to eliminate all areas from terrorists is irreversible, so it is better for you to stay on the side of the army of origin and get the victory» was written in the leaflets.

The appeal partially worked and many people came to the grouping places where they were looked after, refreshed and then transported by bus to safe reception centers organized by Damascus, as Sana’s last note explains..

It was September 17, 2018 when Erdogan signed the first truce with Putin pledging to get the Al Nusra jihadists out of Idlib province to give them a safe escape route to Turkey. Yesterday for the thousandth time the Turkish-backed terrorists violated the ceasefire.

But in the meantime, Islamic extremist groups have been armed and strengthened in Rojava, with the invasion of the Turkish operation Peace Spring, the “source of peace” mission in which the fierce Qaedist militiamen Al Ahrar al-Sharqiya, on 9 October 2019 most important faction of mercenaries from Turkey, massacred the Kurdish activist Hevrin Haly Khalaf shhoting in the head with kalashnikovs.

Autopsy: the Kurdish activist Hevrin Khalaf shoted up at head by a barrage of bullets

In light of all this I wonder with what courage the Deep State puppet, Italian Prime Minister Giuseppe Conte, went on monday to shake hands on behalf of Italy to the bloodthirsty President of Turkey.

I can understand that Putin does it, who needs to dialogue with Ankara for the continued persecution of the United States against Russia. But Moscow also has the autonomy and strength to impose a back-on in war theaters when it decides.

This is why I learn with extreme skepticism the shyly positive news on the Libya front reported by the Italian agency Ansa. “Sarraj signed the ceasefire agreement in Libya,” while Haftar has asked for time until tomorrow morning.

«The Russian Foreign Minister Serghei Lavrov announced it – reports Ansa – “I hope that Marshal Haftar will decide to sign the document,” said Lavrov. The president of the Council of State based in Tripoli, Khaled al-Mechri, has instead signed with Sarraj».

«Summit in Ankara between the Turkish President Recep Tayyip Erdogan and the Italian Prime Minister, Giuseppe Conte. “I hope that the permanent ceasefire will be reached soon” in Libya, Erdogan says at the end of the interview, speaking of the diplomatic work in progress in Moscow» the ANSA still reported which obviously ignores the dead killed by the jihadists in Syria.

«The ceasefire can be a very precarious measure if not included in an effort by the international community to guarantee stability in Libya. And for this reason we shared the opportunity to speed up the Berlin process – these are Conte’s statements reported by the news agency – Italy, he added, supports for Libya the “path already designed under UN auspices. The EU in Berlin it will have a great role but Turkey and Russia will have it too ».

In response, General Haftar left Moscow without signing the agreement which he considers too binding for the withdrawal of his troops who have already surrounded Tripoli where the dangerous and ferocious jihadist mercenaries sent from Turkey have now settled.

The media are spreading some hypotheses on his tactics and on his eventual participation in the Berlin summit wanted by the European Union..

After meeting with no results both General Haftar and President Serraj, Italian Prime Minister Conte flew to Ankara to genuflect to Turkey, ready to intensify the conflict to steal Libyan energy resources, even those managed by the Italian ENI plants in Safrata.

Conte did all this just to build around him that halo of international credibility he never knew or wanted to have. The important thing is to pretend to believe what you say. Today politics is only made of proclamations.

GOSPA NEWS – ALL REPORTS ON JIHADISTS