[ Editor’s Note: Lavrov exposes all the reports we have heard of the Arab Persian Gulf States wanting to deescalate to be false despite our hearing about quiet Saudi-Iran talks via Iraq.

But it seems that making statements are all they are willing to do. If Russia cannot get them to start talks that means the US has put the word out that it would be most unhappy with such. Imagine that.

I cannot tell from this short article if Lavrov is referencing Russia’s 2019 efforts, or if this includes what we had heard from the UAE after the Iran strike on the US base.

The UAE had quickly put out a statement that deescalating was the only feasible way to go. But if such statements are not followed up with work on setting up a meeting, a public one, then it was putting out media chaff.

We have heard no follow up on Iraqi PM Mahdi’s claim that Soleimani was brought to Baghdad to received a communication from the Saudis regarding ongoing talks.

He of course has his hands full after the US informed him it views Iraq as a vassal state and will do with its military there whatever it chooses. That should be a message to all those in the future thinking about stationing US troops on their soil.

It is also way past time for the Vet orgs to start thinking about a “union” for the troops.

Maybe it is time for offering enlistees a choice of contracts of their joining the mercenary pirate military where they would get bonus pay from the looting, or the one to defend the country against all enemies, including those in the command structure that have sold out to the military industrial complex and the Deep State.

Authority to do this is already in the military oath, “to defend the country from all enemies, foreign and domestic”. We are many years into the US supporting the use of proxy terrorist forces in regime overthrow, something usually left to the CIA.

Those who support proxy terrorism wearing the uniform should have to justify and be held responsible for their actions. But who would do this? I don’t see any official body asking the obvious questions, like how our military troops can be abused like this?… Jim W. Dean ] 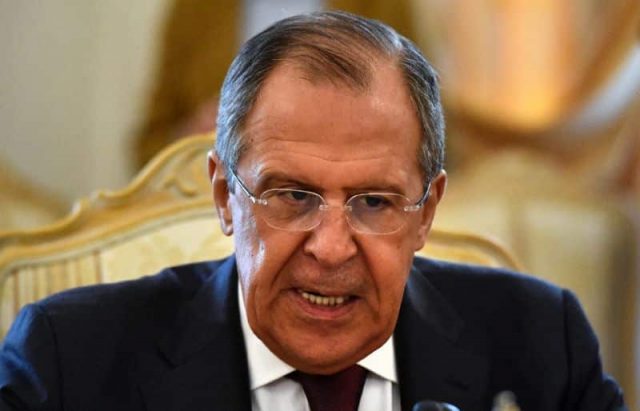 Last year, Russia contributed significantly to the settlement of conflicts in the Middle East and North Africa, Lavrov said during a press conference on summing up the results of Russian diplomacy in 2019.

“The realization of the Russian concept of collective security in the Persian Gulf zone could become an important step towards improving the situation in the entire region,” he underscored. “We presented an updated version of the concept in September last year, during a science seminar, attended by all regional academics and experts.”

So far, according to Lavrov, efforts to convince the Arab states of the Persian Gulf and Iran to engage in talks failed. “Unfortunately, divisions between some Gulf Arab states and Iranians are too deep.

In our contacts with Saudi Arabia, the United Arab Emirates and Iranians, we stand for launching dialogue between them. This understanding seems to be there, but we have so far failed to persuade our friends to start this work,” Lavrov commented.

He underlined that Tehran proposed signing a non-aggression treaty between Iran and Persian Gulf states and then the Hormuz peace initiative on cooperation to ensure security of these waters.

“We have a similar approach, we proposed a strategy of ensuring security in the Persian Gulf and adjacent areas,” the diplomat added. “We want to not only bring together all coastal states of the Persian Gulf — both Arabs and Iranians — but also to boost their efforts with participation of external actors, particularly the Arab League, the Organization of Islamic Cooperation, five permanent members of the UN Security Council and the European Union.”

According to Lavrov, such a framework could roll out a conference on security and trust in the region. “Later, if this process starts other countries of the region could join in,” he said referring to Middle Eastern and North African countries.

Besides, Moscow suggested setting up demilitarized zones in the region, and proposed halting the permanent deployment of groups from extra-regional nations and the creation of hotlines between the militaries.