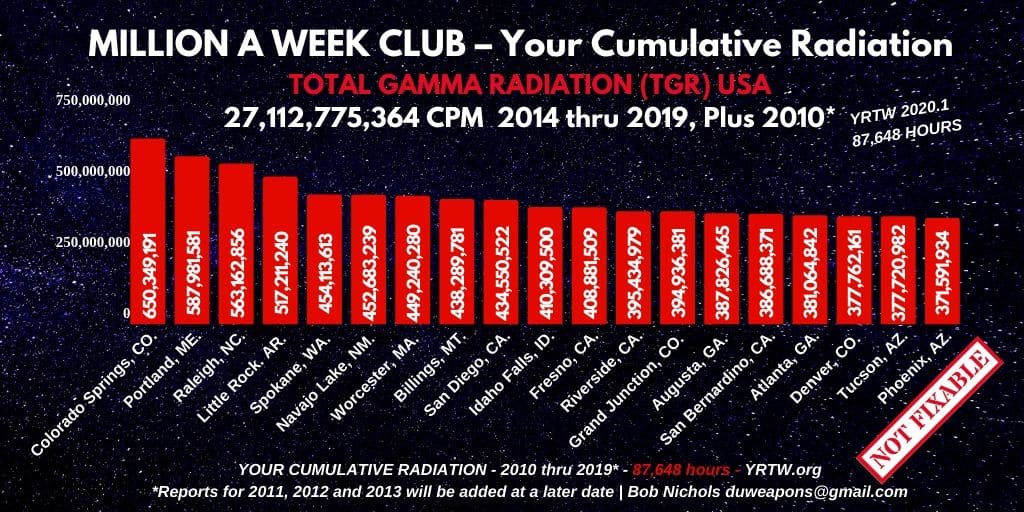 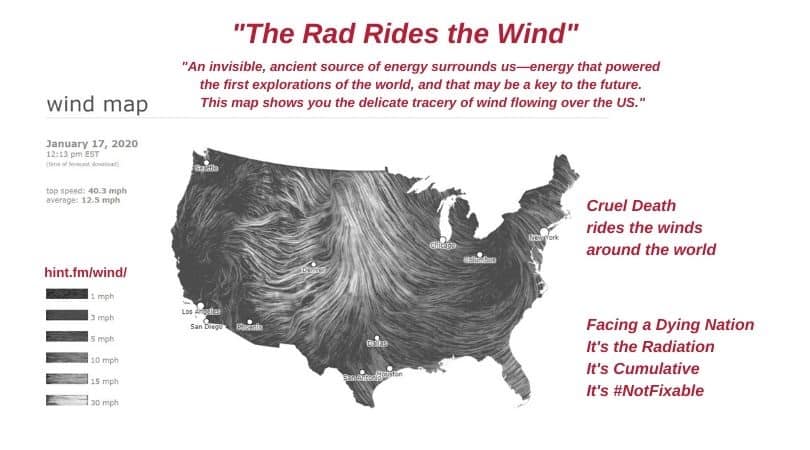 
NOTE TO READERS: My editorial work is solely crowd funded via PayPal. Click here to donate>> 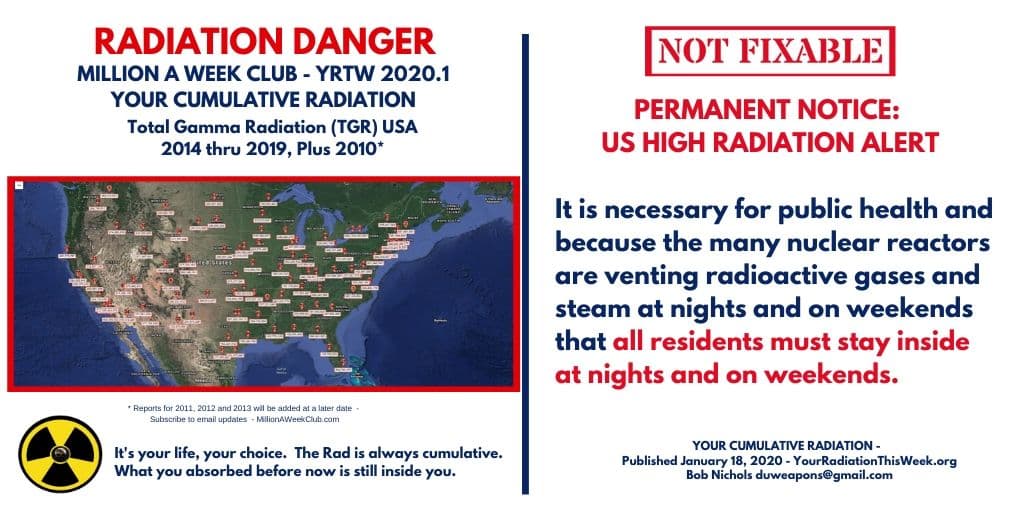 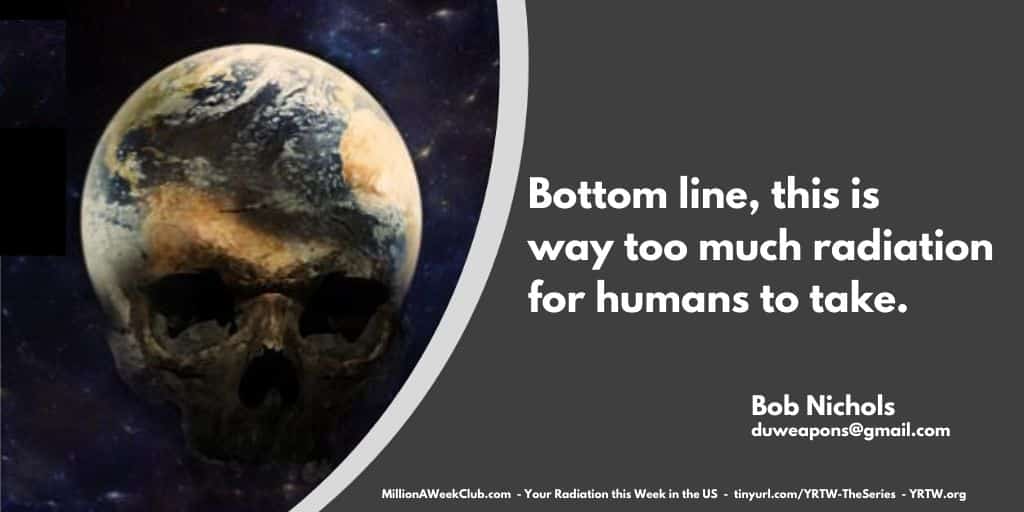 1. The Radiation charts and graphs of the EPA. Individual queries can be built at the EPA RadNet Query Builder
2. The EPA based reporting of NETC dot com, an LLC.
3. These stations’ Radiation equals Total Gamma Radiation. Gamma Radiation Monitors are reporting publicly at all these locations. CPM. “Although we can’t see it, taste it, smell it or hear it we can measure radiation and observe its effects. One way to measure radiation which the United States Environmental Protection Agency [EPA] has chosen to use on its radiation websites is in Counts Per Minute or CPM. Each Count is One Radioactive Decay.” Quote from the ‘Your Radiation This Week’ Apr 3, 2015
4. Radiation destruction of chitin, IAEA, by Ershov, B.G.; Sukhov, N.L.; Nud’ga, L.A.; Baklagina, Yu.G.; Kozhevnikova, L.G.; Petropavlovskii, G.A. (Institute of Physical Chemistry, Moscow (Russian Federation)
5. “Plutonium Air” by Dr Paolo Scampa, AIPRI Blog, Aug 19, 2016
6. “Radioactive Fertilizer,” AIPRI by Dr Paolo Scampa, September 23, 2016, AIPRI: Les engrais radioactifs,
7. “Texas has highest maternal mortality rate in developed world, study finds,” By ABBY GOODNOUGH OCT. 19, 2016,
8. EPA Proposal Allows Radiation Exposure in Drinking Water Equivalent to 250 Chest X-Rays a Year
“Forty-five (45) years later, the Nuclear States officially raise the amounts of “permitted radiation levels” by hundreds and sometimes thousands of times to maintain the utter and absolute dominance of the Nuclear State over everything, everywhere, for all time. No tolerance given.”
9. “Baghdad” by Dr. Paolo Scampa, AIPRI, Saturday 12 November 2016
1110. “News Release, New Aerial Survey Identifies More Than 100 Million Dead Trees in California, ” USDA Office of Communications, “This brings the total number of dead trees since 2010 to over 102 million,”
11. Caribou herd in Alaska suffering from mysterious decline, November 30, 2016, Noel Kirkpatrick, MNN Mother Nature Network, “The Central Arctic caribou herd in Alaska is experiencing a “steep decline” in its population, and scientists are researching the reasons why () .”
12. “Facing a Dying Nation,” a line from the 1979 Tribal Rock Musical HAIR. A scene with “Facing a Dying Nation” starring Treat Williams from the movie is here: The character Pfc. Berger is KIA in Vietnam in 1968.
13. It is Eugen Wigner’s name as a Verb. It’s about all things Wignerized. See Notes on Your Radiation This Week No. 69 and 70
14. sie·vert, ˈsēvərt/, noun Physics, noun: sievert; plural noun: sieverts; symbol: Sv, the SI unit of dose equivalent (the biological effect of ionizing radiation), equal to an effective dose of a joule of energy per kilogram of recipient mass. Google: Sievert
15. Eco Health Alliance interactive map of killer viruses – map
16. “In [a] first, government and Tepco found liable for Fukushima disaster,” by Daisuke Kikuchi, “Maebashi, Gunma Pref. In first, government and Tepco found liable for Fukushima disaster,”
17. Uranium Stocks, “Westinghouse Files for Bankruptcy, in Blow to Nuclear Power,” Wednesday, March 29, 2017 at 10:04PM, “Westinghouse Electric Company, which helped drive the development of nuclear energy and the electric grid itself, filed for bankruptcy protection on Wednesday, casting a shadow over the global nuclear industry.
18. Black Star shows tracks of Alpha particles in an Apes lung much like yours. Plutonium particle in lung tissue: “The black star in the middle of this picture shows the tracks made by alpha rays emitted from a particle of plutonium-239 in the lung tissue of an ape. The alpha rays do not travel very far, but once inside the body, they can penetrate more than 10,000 cells within their range. This set of alpha tracks (magnified 500 times) occurred over a 48-hour period” (Robert Del Tredici, At Work in the Fields of the Bomb [1987], plate 39). 19
19. “De la guerre nucléaire” Maurice, E. ANDRE, nuclear officer (NBCR or nuclear, biological, chemical and radiological exclusive function) Captain Commander, retired. Addendum by Dr. Paolo Scampa.
20. University of Arkansas disposes of wastewater
21. Banner picture by the NY Times. Fire
22. Total Gamma Radiation – Year to Date 2017.7 November 18, 2017, VeteransToday. Here.
23. 30 year old radioactive dead tree at Chernobyl. Very dead. Very radioactive, like millions of others there and around the world. https://outoftheboxscience.com/wp-content/uploads/2016/10/Chernobyl-Dead-Trees-Photo-By-Beatrice-Lundborg
24. Amusing Planet, VIP observers watching the spectacle during Operation Greenhouse at Enewetak Atoll, 1951. http://www.amusingplanet.com/2008/07/how-to-watch-nuclear-explosion.html
25.  Al Gore Lied, The United States National Aeronautics and Space Administration (NASA) lowers the Boom on Al Gore’s Big Lie that the humble, beneficial gas – CO2 – causes global warming https://www.veteranstoday.com/2013/06/28/al-gore-lied/
26. Did you ever think how much Rad U235 or Rad Plutonium 239 is vaporized in a detonation of a nuclear weapon? Bob Nichols, June 11, 2017. Very little, actually.   https://yourradiationthisweek.org/2017/06/11/did-you-ever-think-how-much-rad-u235-or-rad-plutonium-239-is-vaporized-in-a-detonation-of-a-nuclear-weapon/
27. CPM or Counts per Minute is the radiation measuring system used by RadNet, a directorate of the EPA.
28. See the Wind flow! “This map shows you the delicate tracery of wind flowing over the US.” FERNANDA VIÉGAS MARTIN WATTENBERG, See the moving map showing the wind. http://hint.fm/wind/
29. MILLION A WEEK CLUB No 6 – California’s Boosted Fires, By Bob Nichols, December  2017 https://www.veteranstoday.com/2017/12/30/million-a-week-club-no-6-californias-boosted-fires
30. YOUR RADIATION THIS WEEK – Nichols on Nuclear – Library of Articles https://yourradiationthisweek.org/nichols-on-nuclear-library-of-articles/
31. Actual Beta radiation collected by RadNet in 2006 was 7,380,489,546.384977 CPM for Washington, D.C. See RadNet. Same address as Note No. 1.
32. Satellite view of annual Uranium boosted fires in California in November, 2018.
https://earth.nullschool.net/#current/chem/surface/level/overlay=cosc/orthographic=-122.46,39.53,3000https://earth.nullschool.net/#current/chem/surface/level/overlay=cosc/orthographic=-122.46,39.53,3000

“In 1992, in the vicinity of the exclusion zone, radiation due to forest fires reached 20 Bq.m-3 for beta emmitters and 70 mBq.m-3 from plutonium isotopes. Monitoring stations far from these zones registered some peaks of radioactivity.”