Saghar Erica Kasraie, the Iranian woman who styles herself as a critique of the Iranian government and a human rights activist, has been caught red-handed. When the United States assassinated commander Qassem Soleimani, Kasraie couldn’t be happier. She declared:

“The people in Iran are happy that this man who is responsible for the slaughter of so many people is gone. This man has not only the blood of Americans on his hand but the blood of Iranians, Iraqis, Yemenis, Afghans…since when did we start mourning the death of a terrorist? The regime has been saying ‘death to America’ for 40 years. They forced us in school to say, ‘death to America’. I was 7 years old, I didn’t know what I was saying.”

Kasraie moved on to say: “Thank you, Mr. Trump, for making a very hard decision and for having the moral courage to do something that a lot of world leaders would never have had.”

As Buzzfeed itself has recently pointed out, Kasraie never told her viewers that she “previously worked for a militia group fighting in a bitter civil war in Libya”! There is more here than meets the eye and ear: 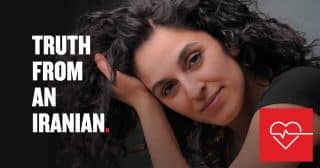 “She had worked in 2019 for Linden Government Solutions, a Texas-based lobbying firm hired to represent the Libyan National Army, a militia in the north African country led by Field Marshal Khalifa Haftar, a former officer in Muammar al-Qaddafi’s government who spent much of the last two decades living in Virginia, during which time he worked with the CIA…

“According to her registration, Kasraie’s job entailed ‘Planning, coordinating meetings with Government, Business representatives, and think tanks, and other government relations services in support of Client’s diplomatic goals’ on behalf of the ‘Decision Support Center of Libya (on behalf of the Libyan National Army).””

Kasraie was and probably still is a CIA agent. In fact, she worked “as a part-time lobbyist last year.” The sad part is that Kasraie has already garnered a number of followers—losers, pinheads, and people who probably don’t even know what the capital of Iran actually is.

“The YouTube version of Kasraie’s video has been viewed 5.5 million times, going viral as a link on Facebook after it was posted to a right-leaning lifestyle page called Bakersfield Tuff and a slew of pro-Trump sites and pages. Another copy of the video, shared on Kasraie’s Facebook page, has been viewed another 3.7 million times.”

The logic is pretty clear here: Saghar Erica Kasraie is a political prostitute who has been paid to act like a puppet on the political stage. Her bosses are the war machine, Trump, and ultimate the country that has perpetuated wars in the Middle East in the first place. And we all know the name of that country by now.