[ Editor’s Note: Peter Ford ended his British diplomatic career after only three years (2003-06), primarily due to his outspoken criticism of British policy toward Syria where he had been ambassador, which we can all see in hindsight was to participate in the carving up and recolonizing Syria with puppet leaders.

His educational training had been in Arab studies, so he landed on his feet in 2006 with the United Nations Relief and Works Agency for Palestine Refugees in the Near East (UNRWA), a UN agency created in December 1949 to support the relief and human development of Palestinians. Ford is one of the good guys.

I disagree with his premise of Trump looking for a “face-saving way out” of Iraq. Doing that would not only remove US leverage on the Iraqi government, meaning interfering in its internal affairs, but send a message to US Persian Gulf allies depending on their US big brother to help these states keep their boots on the necks of their Shia populations. Imagine that.

More important, as Trump has said he “wants the oil” in Syria’s Deir Ezzor, he needs the western Iraq Anbar province bases to move US troops and make believe ISIS opposition around creating enough small level mayhem as a smokescreen for the US remaining.

And last, the US, Israel, and other nearby states want to block any possible land bridge between Iran, Syria and Lebanon that could become the core of a powerful military force that could protect the Shia populations from being preyed upon by Sunni un-elected masters.

Who knows, maybe the Iraqis would feel more comfortable with a Russian base helping them keep a lid on ISIS, if they needed it. We sure as hell know the Saudis aren’t capable of fighting anyone. Once the US is out of the Mideast, there will be incentive to complete peace deals, the last thing that Deep Staters want to see… Jim W. Dean ] 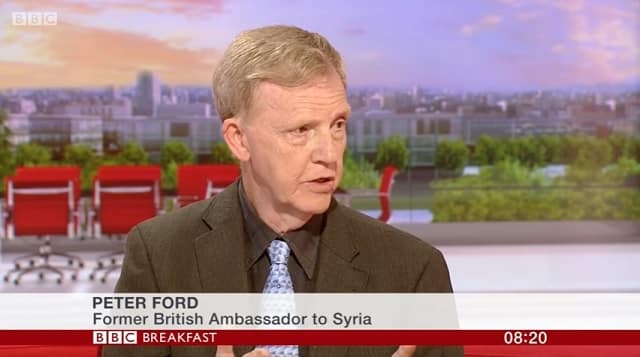 President Donald Trump is desperately looking for a “face-saving way” and an “exit door” to pull the American troops out of Iraq after the assassination of Lt. Gen. Qassem Soleimani on his orders and the ensuing anti-US sentiment in the Arab country, says a former British diplomat.

Peter Ford, former UK ambassador to Syria and an expert on Middle East affairs, made the remarks during a Friday edition of the Press TV’s The Debate program while commenting on the Iraqis’ mass protest against the presence of American forces in their country.

The nationwide protest came three weeks after the US launched an assassination drone attack in Baghdad’s airport that martyred the top Iranian commander and a prominent member of the Iraqi government, Abu Mahdi al-Muhandis, along with several other people.

Since then, anti-US sentiment has been running high in the Arab country and a few days after the assassinations, Iraq’s parliament voted to expel the US troops.

“The march followed the voting by the parliament — a clear majority in the parliament voted for the departure of US forces — how ironic that the Americans who are always boasting about their support for democracy and criticizing other countries because they don’t have proper parliament, and here we have a brazen case of an Arab parliament demanding US departure and the Americans ignoring it, insulting it in fact,” Ford told Press TV.

“It’s clear that a very significant majority of Iraqis are not happy at all, especially after the murder of General Soleimani, it was an insult to the honor of Iraq. I don’t think the Americans realized what the repercussions would be in Iraq itself and now they’ll be showed the exit door, I don’t think they can go on resisting for much longer, I think Trump is looking for a face-saving way out, this is why they are exploring the possibility of NATO taking over the role — although I think this would be unacceptable also — it shows how desperate the Americans are to find the exit door. Trump does have a political need not to be humiliated, not to have a Vietnam moment,” he added.

The former UK diplomat went on to say that the US used the so-called campaign against the Daesh (ISIS) terrorist group as a “pretext” to continue its military presence there, but added, Iraqi security forces can fend for themselves in the face of the Takfiri outfit.

“This is a pretext; the idea that they are there to fight the remnants of ISIS is a transparent empty pretext. The security forces of Iraq are now well capable of staying on top of what’s left of ISIS, particularly if they had help from others like Iran and Russia and Syria together to keep ISIS completely down and out, but the Americans are using the ISIS’ scapegoat as a pretext to justify their presence,” Ford underlined.

He also hailed Iran’s retaliatory attacks on US bases in Iraq following the assassination of the country’s national hero, saying, “It was an evil act, which invited retribution, which came with the Iranian strikes on the US bases… Now Iran has had a chance to prove that technically they can strike American bases with missiles and most importantly they have the necessary courage and commitment to do it.”

Since the early hours on Friday, huge crowds of men, women and children of all ages converged on the Jadriyah neighborhood near Baghdad University, with protesters carrying banners and chanting slogans calling for the expulsion of US forces.

Iraq’s al-Ahd news network reported that Iraqis from all of the country’s provinces had gathered in the city.

The massive rally came after influential cleric Muqtada al-Sadr called on Iraqis to stage “a million-strong, peaceful, unified demonstration to condemn the American presence and its violations”.