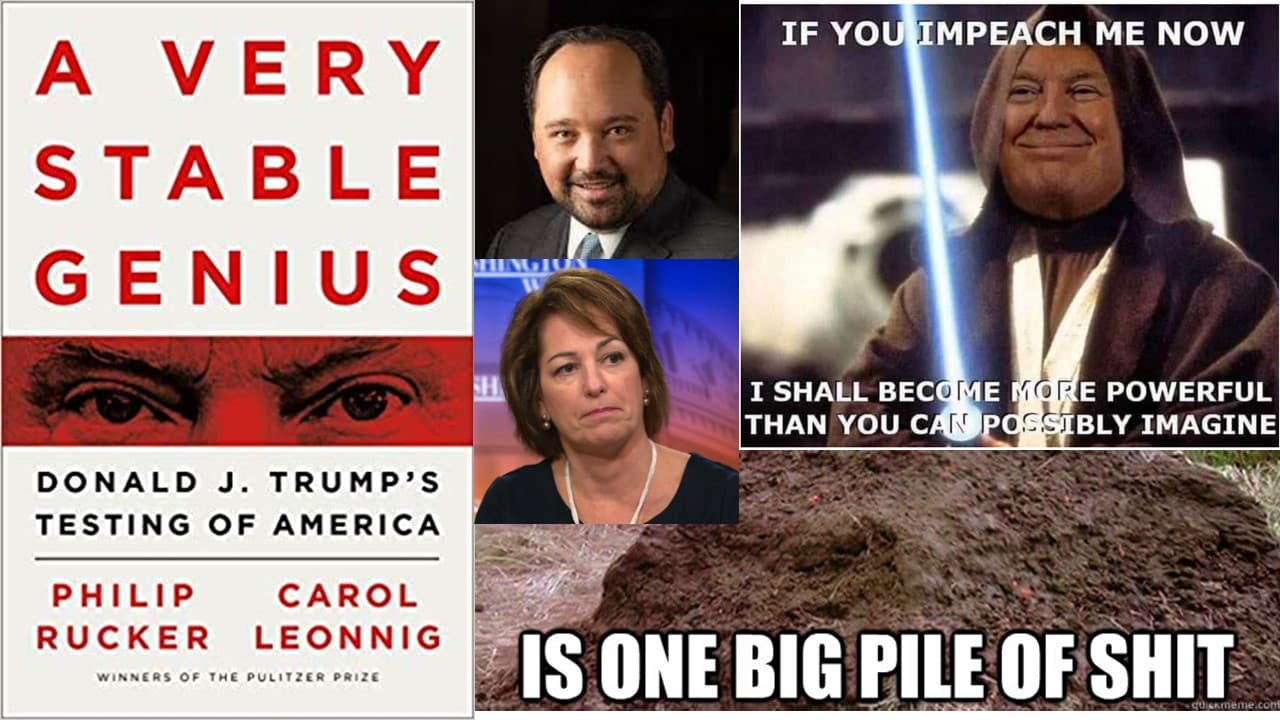 This is in my view a defamatory work, and President Donald Trump, despite being the most public of figures, can and should sue the authors and the publishers for defamation because I am sure that discovery (the emails, calls, sworn testimony) will document malice — this book was designed to defame the President with a  total disregard for the truth. Indeed, as best I can tell, this book STARTED with a checklist for “crazy” and was built from the ground up to document — with selective materials and the deliberate exclusion of all countervailing materials — that the President is “crazy.”

I examined the endnotes and the index very carefully, and what I found — given that I follow the news on Trump carefully — is that this book is based mostly on cherry-picked online sources and a pre-conceived outline of the following”mental illness characteristics” that the authors have sought to portray (and carefully indexed, conveniently revealing their starting point):

It just makes me sick to see The Washington Post (and The New York Times) respresented by such dishonorable cretins.

This book is a media hit job and the authors’ claim to be truth seekers is clearly a lie — the book is out of touch with both the President’s actual accomplishments, and with today’s reality — the Manafort case thrown out on appeal; Flynn about to be exonerated, a nothing burger of a Mueller report, the impeachment farce about to end and in passing, the unification and denuclearization of the Koreas and peace in the Middle East coming soon. Add accomplishments related to family, economy, immigration, and trade and you get everything that is NOT in this book.

I read this book carefully, in part to get a sense of the sources. The sources generally do not actually appear in the endnotes (neither by name nor by referred anonymous interview) but based on my reading I think the sources were, in alphabetical order

Kelly, Mattis, and Tillerson strike me as especially attentive to the authors’ search for dirt.  I have no doubt missed a few including the obvious morons in Congress such as Schiff the dick and Nadler the (very large) ass. Schumer is probably in here as well, but not obviously.

Yes, our President has his flaws, including being very willful and abrupt with those who do not meet his standards, but given the state of the country when he  took over, I think he has shown restraint and enormous patience.

I must also say that there is a very strong reek of plagarism in this book. I don’t have the time to compare and contrast passages, but I list the other books I have reviewed on Trump below and it is my conclusion that the authors have copied liberally from others — they started with the outline above , the goal being to “frame” the President, cherry picked some online sources, and then filled in with material from selective interviews and relevant books available to them.

I will make just three points in dismissing this book:

01 within the book the authors express shock, dismay, angst, and more over the President demanding that South Korea pay the costs of US military systems and personnel, specifically the $10 billion anti-missile defense system. What kind of moron do you have to be to not see the sense of that?

02 the authors do not include either of the following as a reference because it does not fit their despicable defamatory narrative:

Yoda: A List of Accomplishments by President Donald Trump

03 Here are two bits from a book (Team of Vipers) that the authors did NOT copy:

Jack Welch on Donald Trump (132): “They can say what they want about him, but I don’t know if any president has been more prepared to sit in that room and talk business. It was like talking to a peer, not a politician. Hell of a meeting.”

The author (of Team of Vipers) bottom line on our President Donald Trump:

QUOTE (247): “I marveled at Trump’s willingness to endure a seemingly limitless amount of criticism and never waiver. He was fearless—the rarest of traits among politicians. If he believed he was doing the right thing, he was willing to weather any storm. And yet Trump always remained a walking contradiction. He was the bravest person I’d ever seen in the face of public scrutiny, but resented relatively mild critiques from his aides. He was arguably the toughest political combatant in modern American history, but often shied away from making much-needed staff changes that would cause conflict in private. He was an idealist—a true believer in his populist, nationalist worldview—but pragmatically cut deals with anyone willing to make an interesting offer. He was less afraid to do the right thing—the difficult thing—than anyone I’d ever met but sometimes seemed to lack the guiding principles that could lead him what exactly the ‘right thing’ was.”

Here are other books I have reviewed. All of them, without exception, are better reads than this book. If I were on the jury, it would not be difficult for me to conclude that this book was designed to defame, to injure, to manipulate voters, without regard to any standard for balanced reporting.

Review: Let Me Finish -Trump, the Kushners, Bannon, New Jersey, and the Power of In-Your-Face Politics

Review: Trumped! How Tweets, Trolls, and Memes Won the Presidency for Donald Trump

Review: Team of Vipers – My 500 Extraordinary Days in the Trump White House

Review: War on the Middle Class–How the Government, Big Business, and Special Interest Groups Are Waging War on the American Dream and How to Fight Back

Review: Screwed–The Undeclared War Against the Middle Class — And What We Can Do About It

Review: Leave Us Alone–Getting the Government’s Hands Off Our Money, Our Guns, Our Lives

SPECIAL: Review: The Shadow President – The Truth About Mike Pence + Comment Trump Not Running in 2020?

Review: One Market Under God–Extreme Capitalism, Market Populism, and the End of Economic Democracy

Review: The Marketing of Evil–How Radicals, Elitists, and Pseudo-Experts Sell Us Corruption Disguised As FreedomReview: FEAR – Trump & The White House

There is much about the current Administration that troubles me, including unkept promises, no arrests yet, bending  to Zionist Israel, and not defending the 1st, 2nd, and 4th Amendments of the Constitution — and not implementing #UNRIG election reform — but on balance I give our President a 4 out of 5 — and a solid 5 given that he is fighting for his life and ours against the Deep State and the Shadow Government that owns the two-party tyranny. The authors are scum. In seeking to portray our president as mentally and emotionally unsuited, they are not only demonstrating that they are scum, they are also challenging the Electoral College and the public majority (once the Google and illegal alien voters are discounted) that elected our President. These two fools probably don’t even know that the Electoral College exists because the President is elected by the STATES, not the public, and the Senators, once we overturn the unratified 17th Amendment, are supposed to represent the STATES, not the public — it is the House that represents the public.