Netanyahu withdraws request for immunity from prosecution on graft charges

[ Editor’s Note: My, my…it looks like we have Bibi borrowing a tactic from the Trump play book, discrediting an established Knesset procedure as illegitimate.

And not  being one for originality, he also borrowed another spin by having the Likud faction boycott the committee setting up process, similar to what Trump did with the Sunni faction boycotting the Iraqi vote to expel US troops for executing Soleimani and his staff when they were official diplomatic guests of the US.

They then try to pitch their respective voting masses that the outcome of the vote is not “legitimate”. Trump as a version of this going on in his impeachment trial, backing off his initial claims that he did not do what he has been charged with, but claiming that what he does is never illegal, basically because he is President.

We will have to be watching how this effects the independent voter block, now that largest in American politics at 39%, where we have a president trying to turn the impeachment process into a rubber stamp OK for whatever he wants to do.

Gosh, what else might Donald be planning to do this year? Has he been advised that he might as well go for the whole emperor routine as if he loses the election any new impeachment process becomes a dead issue anyway. Is this Rudi’s idea? … Jim W. Dean ] 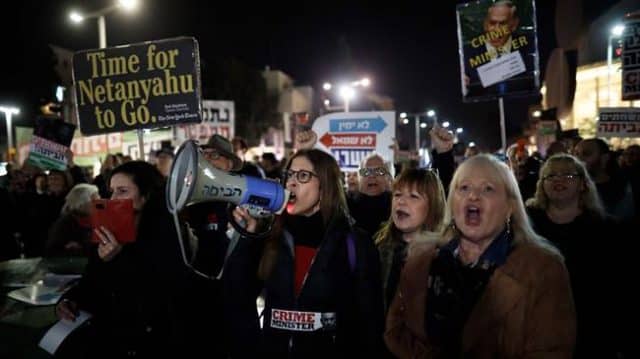 In a statement issued on his Facebook page on Tuesday, Netanyahu said the immunity proceedings at the Israeli parliament (Knesset) would be a “circus” and that he did not want to take part in that “dirty game.”

The Knesset was set to convene later in the day to discuss the formation of a committee to debate Netanyahu’s request for immunity from prosecution.

The right-wing bloc of parties backing Netanyahu at the upcoming general elections had decided to boycott the parliamentary session, calling it tainted and politicized.

“During this fateful time for the people of Israel, while I am in the US on a historic mission to shape Israel’s permanent borders and ensure our security for future generations, another Knesset episode is expected to begin in the immunity circus,” wrote Netanyahu, who is currently on a visit to Washington ahead of US President Donald Trump’s unveiling of his controversial deal on the Israeli-Palestinian conflict.

“Since I was not given due process, because all the rules of the Knesset were trampled on, and since the results of the procedure were pre-dictated without proper discussion, I decided not to allow this dirty game to continue,” he added.

“Netanyahu is going to trial — we must move forward. Israel’s citizens have a clear choice: A prime minister who will work for them or a prime minister working for himself,” he said in a statement. “No one can run a state and at the same time manage three serious criminal cases for bribery, fraud and breach of trust.”

Last November, the Israeli premier was indicted on charges of bribery, fraud and breach of trust stemming from three long-running cases. He rejected his indictment on corruption charges as an “attempted coup” stemming from “false accusations” and a systematically “tainted investigation.”

In early January, he asked the parliament to grant him immunity from prosecution in those cases.

Case 1,000 involves allegations that Netanyahu received luxury gifts from international billionaires in exchange for favors. In Case 2,000, he is accused of conspiring with the owner of the Yedioth Ahronoth newspaper to undermine a critical daily. And Case 4,000 involves allegations that Netanyahu offered incentives to the Israeli telecom provider Bezeq in return for positive stories in the Walla news website.

Netanyahu’s retraction of his immunity request paves the way for legal proceedings against him to go forward.

Now, Israel’s attorney general can file the indictment with the Jerusalem District Court at any time, instead of having to wait for the conclusion of immunity deliberations at the parliament.