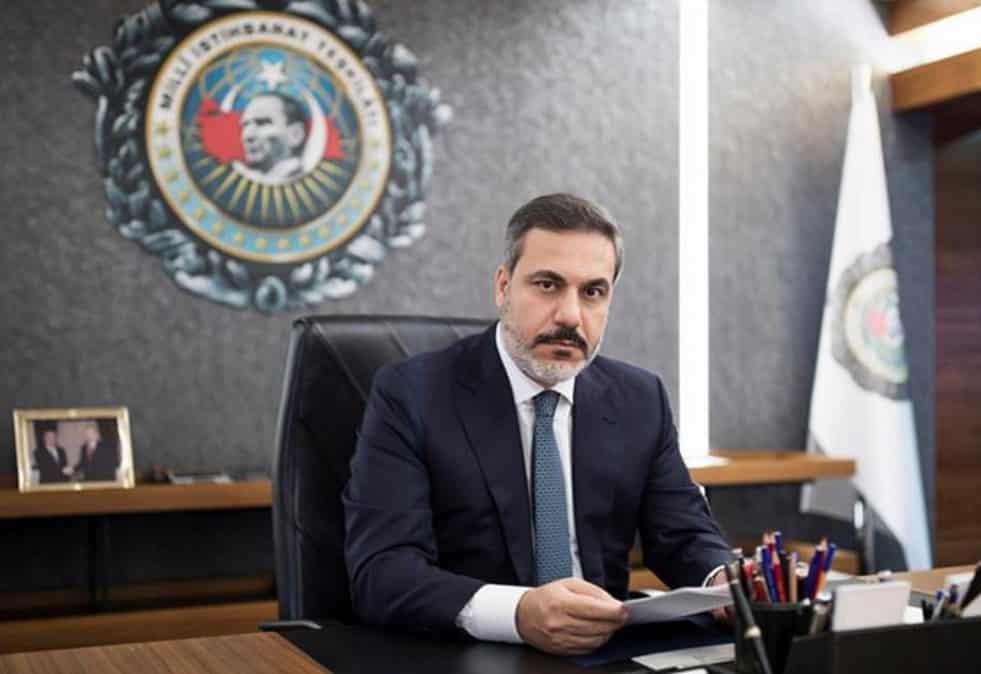 There have been really dramatic developments in the issue of the actions of Turkish MIT leader Hakan Fidan, who according to Israeli newspaper Makor Rishon, identifies with Iranian General Kassem Soleimani.

It published a “fiery” article addressed personally to the head of the Turkish Intelligence Agency (MIT) Hakan Fidan, who appears to be taking over after Iranian Revolutionary Guards leader K. Soleimani.

In an article titled “Sultan and Suleyman”, columnist Pazit Rabi says that Suleyman and Fidan were carrying out the same terrorist act in Iraq and Syria, and both were targeted.

The Israeli columnist clearly states that “after the execution of K. Soleimani it is now time to focus on the plot of his twin, head of the Turkish Intelligence Service (MIT), Hakan Fidan, given his” dark “action against him. Israel.

Turkish guillotine journalist A. Bozkurt today writes that Fidan organized three secret meetings with Islamic State representatives in Iraq and Syria (ISIS) in spring 2014 to discuss with Khalifat over the Khalifat region , implying within them Israel.

According to these sources, Alper Örün, commander of the 3rd Border Military Administration, participated in three meetings with ISIS warlords who arrived in the border town of Suruç in the Turkish province of Şanlıurfa.

A Turkish military intelligence officer, identified only by the name of Mesut, was also among the participants in the meeting.

Nordic Monitor writes that this secret meeting (in May 2014) with ISIS leaders was planned by Kemal Eskintan, an MIT official responsible for the Syrian issue.

The three ISIS warlords, who were invited to the meeting, were received at the Turkish border at Tal Abyad accompanied by a special military guard. The meeting took place in the meeting room at the guard’s entrance.

Turkish intelligence officer Kemal Alkan, who belonged to the 20th Motor Brigade in Şanlıurfa province, and Tamer Nazmi Sezen, commander of the 3rd Border Regiment, attended the meeting to represent the Turkish army with the approval of their superiors.

Sources, wishing to remain anonymous for security reasons, claimed that more meetings were held between MIT, Turkish military officials and ISIS representatives as part of efforts to reach agreement on the rules of engagement between the two sides.

The new revelations indicate that these relations were and continue to be very strong, and a whole network of jihadists has been revealed which has caused disaster in Syria and Iraq and now in Libya.

There is a military conflict in the Mediterranean

Huge gas discoveries on the east coast of Israel and Palestine are expected to make Tel Aviv a regional energy hub. Whether Israel will be able to exploit all those gas reserves is not yet confirmed, says Arab media.

However, it is certain that the Middle East is already on the brink of a major geostrategic war between Israel and Turkey, with this political conflict capable of turning into a real military confrontation. Not surprisingly, Israel is at the heart of this growing conflict.

“Last week, we agreed to build a gas pipeline to Egypt. We have turned Israel into an energy superpower,” Israeli Prime Minister Benjamin Netanyahu said during a cabinet meeting on January 19th.

Israeli strategy has already established strong relations in an already volatile region, extending its power in Cyprus, Greece, France, Italy, Egypt and Libya, while clashing with Turkey and Lebanon.

A few years ago, this scenario seemed unthinkable, but now it is not only feasible, but it is being implemented properly. Turkey has since protested strongly against the signatures, saying that the deal was specifically designed to marginalize it financially and energetically, excluding it from the Mediterranean.

Given the huge gas fields that are ready to fuel European markets, it is almost certain that the Mediterranean gas will ultimately be a major source of enormous political differences, even of a war.