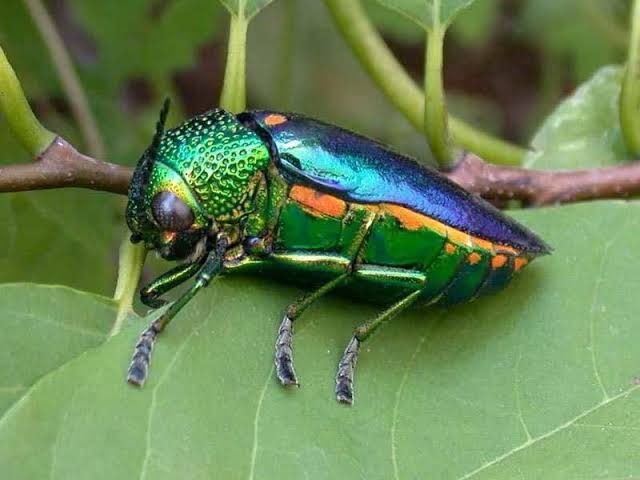 In nature, sometimes the best way to blend in is to stand out. This oddball strategy seems to work for the jewel beetle (Sternocera aequisignata), a super-sparkly insect famous for the dazzling, emerald-toned wing case that adorns its exterior. Like the florid feathers of a male peacock or the shimmer of a soap bubble, these structures are iridescent, shining with different hues depending on the angle they’re viewed from.

In most other creatures, such kaleidoscopic coloring can’t help but catch the eye, allowing animals to woo their mates or advertise their toxic taste. But according to a study published last week in Current Biology, jewel beetles might just turn this trope on its head, deploying their beguiling gleam for camouflage instead.

As Rodrigo Pérez Ortega reports for Science magazine, this counterintuitive theory was first proposed a century ago, but only recently tested in the wild. To see if the glitz and glam of jewel beetles might help them blend in against a forested backdrop, a team of researchers led by Karin Kjernsmo, an evolutionary and behavioral ecologist at the University of Bristol, placed 886 jewel beetle wing cases, each filled with larvae, atop leaves in a local nature reserve. …..