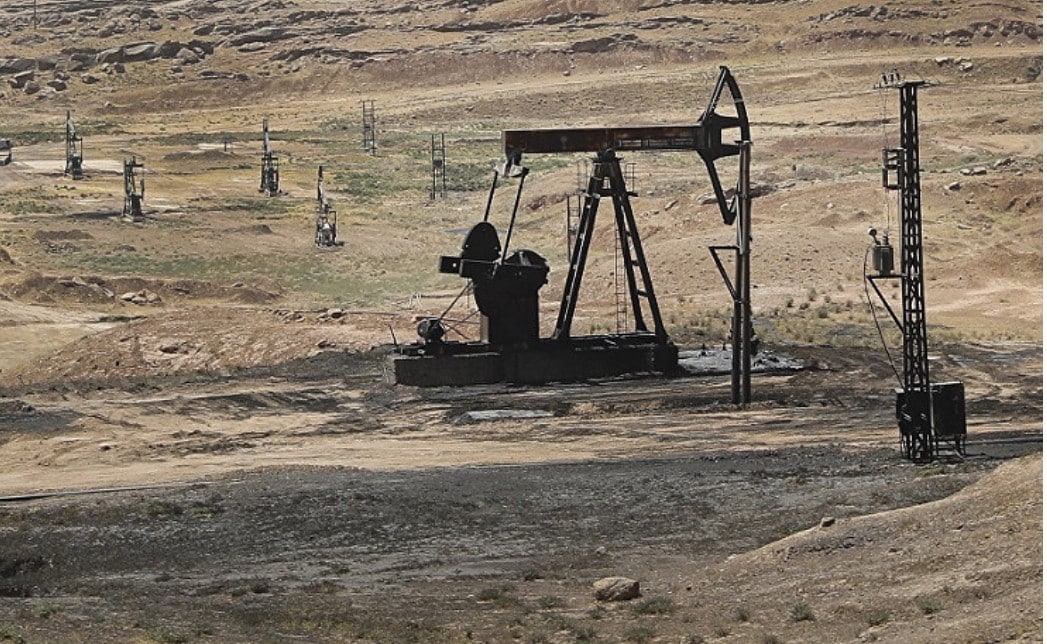 By Gordon Duff and New Eastern Outlook, Moscow (Established in 1816)

The Saudi Arabian oil company, Aramco, is now hiring oil workers throughout Deir Ezzor Province inside Syria as part of a joint effort, nominally with an unknown American entity and with a full partnership with both ISIS and the United States Army.

Thousands of unemployed Syrian engineers and oil workers are being asked to apply for jobs paying $3000 per month.

No one knows who they will be working for.

This is the story we will be examining, how it began and where it is going now.

Under the protection of both ISIS and the United States Army, Aramco began an exploration of 12 new oil and gas deposits recognized by American SAR (Synthetic Aperture Radar) military satellites, retasked for this purpose.

These oil and gas fields represent significant finds, equaling the Kirkuk field in Iraq and the largest of Saudi Arabia’s oil finds.

Similarly, as early as 2012, massive oil and gas deposits were discovered in the Mediterranean Sea, some off Gaza, others off Cyprus, but the largest traversed inland, into Syria, across Latakia and Idlib Provinces, areas now held by ISIS and al Qaeda with US support.

We know that prior to the Russian Aerospace Forces eliminating oil trafficking by ISIS from both Syria and Iraq, the famous satellite photos of 12,000 oil trucks four abreast that the American led coalition never saw, massive theft of oil was going on under the guise of terrorism.

We also know that when the US went into Iraq, its oil fields were looted for year after year, a process that continues unabated under the partial American occupation of Iraq.

In November 2018, Trump announced the US was going to “secure Iraq’s oil” in order to develop the oil fields and bring in American companies.

We now know that the process began 18 months earlier, but the company wasn’t American, it was Saudi. In fact, that 18 months was spent identifying new oil deposits on both sides of the border, in Iraq as well as Syria and in securing the ability to explore and service these new finds through the cover of anti-ISIS operations.

In fact, we find that there were, in fact, no ISIS operations at all but rather mercenaries hired by Saudi Arabia and the US, operating in conjunction with American air and artillery cover, to hide oil exploration in the region.

By late December 2019, the security situation across Syria had changed dramatically. Russian forces had taken over many of America’s oil bases in the North of Syria and had moved toward the Turkey, Iraqi border.

They were unaware, at that time, that the real moves were coming from the South, from al Tanf, and the US occupied zone on the Jordanian border.

Then, in early January 2020, an inexplicable resurgence of ISIS capabilities blocked highways from Palmyra to al Bukamal and across the region, forces that should not exist. Those ISIS forces were deployed from American training camps in the US-occupied zone of Southern Syria.

Their job was to secure transit routes for oil drilling equipment to be transited from Saudi Arabia, some transiting Iraq as well, under US protection in order to comply with Trump’s policy of “seize the oil.”

The problem, however, is that there would be no way to build and service these massive new oil and gas fields under the current political situation. It would become necessary for Iraq’s Anbar Province, perhaps Nineveh as well, to be broken off into a new Sunni only entity, as had happened in early 2014 when Sunni based ISIS, mostly led by former Sunni leaders loyal to Saddam Hussein, enabling Aramco to set up full-scale operations.

In order to create a political situation that would facilitate this, Iraq’s Shiite led government would have to be put under pressure and collapsed.

Since 2018, Adel Abdul Mahdi had been prime minister, from Al Jazeera:

The presidency, traditionally occupied by a Kurd, is a largely ceremonial position, but the vote for Salih in parliament on Tuesday was a key step towards forming a new government.

Under Iraq’s constitution, Salih – a 58-year-old, British-educated engineer who has held office in both the Iraqi federal and Kurdish regional governments – had 15 days to invite the nominee of the largest parliamentary bloc to form a government. He chose to do so less than two hours after his election.

Since Saddam Hussein was toppled in a 2003 US-led invasion, power has been shared among Iraq’s three largest ethnic-sectarian components.

The most powerful post, that of the prime minister, has traditionally been held by a Shia Arab, the speaker of parliament by a Sunni Arab and the presidency by a Kurd.

A former vice president, oil minister and finance minister, Abdul Mahdi now have 30 days to form a cabinet and present it to parliament for approval.

He faces the daunting tasks of rebuilding much of the country after four years of war with the armed group Islamic State of Iraq and the Levant (ISIL, also known as ISIS), healing its ethnic and sectarian tensions, and balancing foreign relations with Iraq’s two major allies – Iran and its rival, the US.

Abdul Mahdi, 76, is a trained economist who left Iraq in 1969 for exile in France, where he worked for think-tanks and edited magazines in French and Arabic. He is the son of a respected Shia leader who was a minister in the era of Iraq’s monarchy, overthrown in 1958.”

The US has chosen to not recognize the authority of the Mahdi government and, after the murder of General Soleimani, has refused the legal demands of that government to leave Iraq.

The US demanded that Abadi be named prime minister, who had kept a blind eye on American misconduct during his time in office.

The US only recognizes Abadi’s authority though he freely accepted Mahdi’s election, congratulating him on his election.

In Syria, we now see a massive resurgence of ISIS, not under the lack of America’s efforts against ISIS but rather with America’s full support of ISIS.

We also see why, Syrian oil, Iraqi oil too, not minor oil discoveries but massive ones. We also see an inexplicable relationship with the US Army and a private Saudi owned company that has personal relationships with White House envoy and Trump son-in-law, Jared Kushner.

We also look at the Soleimani killing and wonder if it was intended to bring about an Iraqi civil war that would be required for Saudi Arabia to seize Syria’s oil fields under US military occupation, or is that US military and ISIS occupation?