Yesterday Donald Trump and Israeli PM Netanyahu unveiled the Jewish “peace plan” for Israel and Palestine. The plan, which Trump deceptively refers to as the “deal of the century”, was written by what sounds like a Jewish law firm – Kushner, Greenblatt, and Friedman.

All three of these authors of the plan, Trump’s son-in-law Jared Kushner, Jason Greenblatt, and Trump’s bankruptcy lawyer and current US ambassador to Israel David Friedman are Orthodox Jews who believe the Hebrew Bible/Old Testament is the Word of God. Friedman is even a Jewish priest of the Kohanim caste!

Since the ungodly Hebrew Bible/Old Testament is the foundation for the thinking of these three peace plan authors, it’s important to objectively look at what their Hebrew Bible/Old Testament teaches. It’s very unfortunate that in the 21st century we have to concern ourselves with Bronze Age superstitions being applied to the real world. But, as Western philosophy teaches, we must see things as they really are so we can make the best decision on how to deal with them.

This ungodly anti-Gentile teaching is found at Leviticus 25:44-46. It falsely claims God told the Jews:

“Both thy bondmen, and thy bondmaids, which thou shalt have, shall be of the heathen that are round about you; of them shall ye buy bondmen and bondmaids. Moreover of the children of the strangers that do sojourn among you, of them shall ye buy, and of their families that are with you, which they begat in your land: and they shall be your possession.

And ye shall take them as an inheritance for your children after you, to inherit them for a possession; they shall be your bondmen for ever: but over your brethren the children of Israel, ye shall not rule one over another with rigor.” 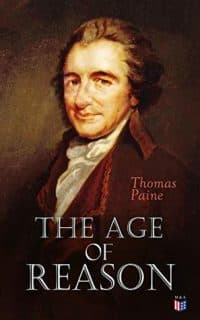 It’s interesting to note in the above Bible quote that “heathen” is used to denote Gentile people. The American Founder and Deist Thomas Paine addressed the Jews referring to Gentiles as heathens in The Age of Reason. Paine wrote:

“We know nothing of what the ancient Gentile world (as it is called) was before the time of the Jews, whose practice has been to calumniate and blacken the character of all other nations; and it is from the Jewish accounts that we have learned to call them heathens.

But, as far as we know to the contrary, they were a just and moral people, and not addicted, like the Jews, to cruelty and revenge, but of whose profession of faith we are unacquainted. It appears to have been their custom to personify both virtue and vice by statues and images, as is done nowadays both by statuary and by painting; but it does not follow from this that they worshiped them, any more than we do.”)

Donald “Bone-spurs” Trump likes to flap his jaws about making America great again. Yet, he is putting the lives and limbs of American military members on the line for the defense of the Jewish state of Israel, and he is taking from Americans BILLIONS of tax dollars every year and giving them to the Jewish state of Israel. Anyone with common sense can see that these actions of Trump’s are not at all putting America first or making America great again.

They are profoundly harmful to Americans and America. If Trump was familiar with the Hebrew Bible/Old Testament, he would know that the ancient Jews who wrote it claimed God wants the Jewish state of Israel to rule the world as Eretz Yisrael/Greater Israel. This is seen in many verses, such as Deuteronomy 28:1 which claims that God said if the Jews follow all of God’s anti-Gentile commands “the LORD thy God will set thee on high above all nations of the earth.” All nations of the Earth includes the United States of America.

Bone-spurs also needs to realize that the ancient Jewish clergymen who wrote the Bible claim that God will destroy any nation that is not subservient to the Jewish state of Israel. This is seen at Isaiah 60:12 which claims God said regarding Israel, “For the nation and kingdom that will not serve thee shall perish; yea, those nations shall be utterly wasted.”

For more on Jewish superiority promoted in the Bible which ancient Jewish clergymen wrote, click here.

The Jewish authored Israel/Palestine peace plan Trump and Netanyahu unveiled says the Palestinians can have their capital in East Jerusalem, but it will be under Israeli occupation and be Israel’s undivided capital. Of course, that makes absolutely no sense, much like the Jewish authored Bible.

What illegally occupied Jerusalem remaining Israel’s undivided capital, in reality, means is that the Palestinians won’t have their capital there. The peace plan also allows Israel to annex/steal all of the Jordan Valley which is in the Palestinian West Bank, but which Israel refers to as Judea and Samaria, their Bible names, as well as annex all of the illegal Jewish squatter camps/settlements that are on Palestinian land. Netanyahu said he will ask his cabinet on Sunday to vote on officially annexing/stealing the Palestinian land.

The fact that Israel refers to the Palestinian West Bank by its biblical names of Judea and Samaria shows the truth to the statement made by the Jewish founder of the warmongering Israel over all neoconservative movement Leo Strauss.

In his speech Progress or Return? The Contemporary Crisis in Western Civilization, Strauss said, “Judaism is a concern with the return; it is not a concern with progress. ‘Return’ can easily be expressed in biblical Hebrew; ‘progress’ cannot.”

Trump’s Israel/Palestine peace plan is pure nonsense, aimed at promoting the Jewish state of Israel over everyone and everything, just as the Bible is. Thomas Paine made it very clear in The Age of Reason, The Complete Edition how we should deal with nonsense. Paine wrote:

“Nonsense ought to be treated as nonsense, wherever it be found; and had this been done in the rational manner it ought to be done, instead of intimating and mincing the matter, as has been too much the case, the nonsense and false doctrine of the Bible, with all the aid that priestcraft can give, could never have stood their ground against the divine reason that God has given to man.”

In the final analysis, we must decide if we’re going to follow our innate God-given reason or the damaging nonsense of the Jewish clergymen who wrote the Bible.